Angelique and the Green Planet 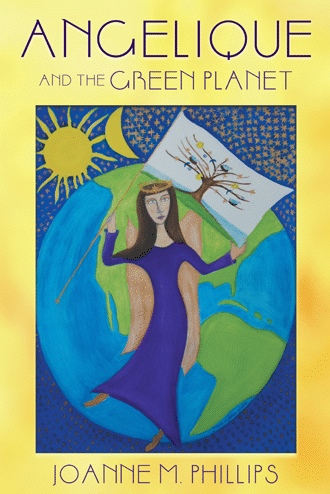 To believe possible;
To imagine.

I. The Creation of the Universe and of Angelique

In the beginning, all that existed was a single beam of singing light. The light basked in the joy of its existence, radiating love everywhere. As time moved forward, the light increased its intensity to the point that it no longer could remain a beam. Because of this, it had no other choice than to explode and did so in a magnificent burst of energy that filled the sky with its glowing pieces. Where the light cooled, it made planets, suns and moons.
And so, the universe was created. It flowed with a network of galaxies bathed in breathtaking color filled light. Yet, despite its vast beauty and abundance, the universe seemed empty. To remedy this, the light burst with a second more powerful explosion, an event that released billions of light-filled seeds. The seeds soared throughout the varied galaxies at blinding speeds. When the force from the explosion calmed to stillness, darkness came into existence. The light could not be seen where darkness fell; yet it existed behind a curtain of space and time. For now all was peaceful.
Among the sky's dark tapestry the seeds danced playfully filling the sky with speckled light. A cosmic wind from the east picked up and again blew the seeds scattering them into different areas of the universe. It was at these locations that they would later become living beings.
In the northern most point, countless numbers of the seeds settled among the soft grey cosmic dust. They nestled into the darkness, resting after their long journey. Singularly, the seeds awoke and instinctively stretched out to the surface. As time elapsed, radiant shoots grew upward and roots extended like cocoons into the dust. Soon individual creatures that numbered in the billions illuminated the surface of the sky with subtle flickers of silvered light.
In accordance with the rhythm of the universe, these stars grew boldly bringing warmth to the sky. They sang at first in meek, quivering voices mimicking the song of the original light beam. As they grew, their wrinkles smoothed out, and their songs became more vibrant. Their notes rang, and in a whisper of time, brought new life into the sky.
One day the light was illuminated with a pinkish glow. Its sound changed the star-like bodies into cylinders. The low notes caused the cylinders to sprout wings. The middle range caused the rest of the changes. A head sprung forth from the top. Legs with feet and arms with hands stretched out from the side and bottom. When finished, the transformed stars' body design was mobile, allowing them to leave their place in the sky in order to explore the newly created universe. These transformed stars became known as star beings.
One star being was most affected by the energy of the songs. During the change a powerful storm swept throughout her body of light. Whirls of energy played upon her form, heating and transforming every molecule of her being. Once complete, the heat was released into streams of light that evaporated into the sky.
This transformation bestowed upon the star being an abundance of power, so much so, that her strength surpassed the others and her light became the most potent. It was able to beam across the sky, cutting through the densest cloud formations. The star beings' songs became the most enchanting, echoing notes of great wisdom. Her brilliant face captured the beauty of a million rising suns. She had the most powerful light that stood out among the rows holding all the other star beings.
This star being felt a chill move up her body. She looked around and realized for the first time, that she was separate from the sky. She gazed upon her new form. It looked and felt denser than before, as if someone had spun her soul into a finely woven garment. She realized she was no longer a star, but a star being, able to think thoughts that were not a collection of the other stars, but her own.
Reaching out from the stillness, she touched the sky, which she only before felt whisk by her. She heard for the first time, a soft gentle melody that it was singing.
"We are made up of molecules of blue. We are made up of molecules of truth. We are made up of molecules for all beings to see. We wish for our molecules to be in a state of peace."
"How beautiful are these molecules!" the star being exclaimed as she touched the ribbons of sky, feeling their silky blue texture between her fingers.
"How can such a magnificent sky not be at peace?" she wondered. “The sky feels to be content to me."
Again she touched the sky, but this time, she sensed a strange movement among the molecules. In her fingers, she could now feel the discord as if a symphony of darkened stars were singing. At times the notes were soft and peaceful. At others they were spiked with uncertainty. Knowing that the star being was aware of its disharmony, the sky sang to her in soft, velvety notes:
“In a far away galaxy exists a planet of green, a planet whose beings have forgot how to see the beauty of peace. Now they no longer see our molecules of blue, our molecules of truth. The energy their thoughts generate echoes into our sky, disturbing our molecules of blue, our molecules of truth."

Thoughts rushed into the star being's mind, like a swiftly moving comet. As she looked around the sky she could see bright spots of light everywhere among the blue. The sky's song moved the star being with compassion.
"Perhaps I could find the source of the sky's disharmony, and bring its blue molecules into a state of peace," she thought.
The star being could feel the star song vibrating notes around her. They gently caressed her form with soft pulses of light. She began to wriggle out of the nest that held her in the sky in an attempt to move out into the blue sea. Once loosened from the strings that held her there, she carefully stretched her wing's soft tips and rotated them back, first the left and then the right. After a lengthy effort, she was able to coordinate them in unison and begin her flight.

Lucidus, King of Light asks a star being named Angelique to help teach the inhabitants of the green planet, a planet in a galaxy far away from her sky, to be at peace. When Lucidus speaks, Angelique watches in awe as each exhale gives birth to a new star. Angelique promises to help this beautiful being but is unsure how she will accomplish such a mission. When she arrives at the green planet she meets with some of its inhabitants; the birds, the trees, the waters, the flowers and a boy who dances like the sun. They all lead her in the direction of the humans, those who have destroyed peace on the planet. After Angelique attempts to greet the humans she is dismayed as they are the only beings that are unable to see her or hear her. How can she help the humans if they do not know she exists? Will she be able to keep her promise to Lucidus? Doubtful and afraid, Angelique retreats to a beautiful forest where she falls asleep and is given an inspired message in a dream. Does the message encourage Angelique to complete her mission to help the humans create peace on the green planet?