Secret Keys to Communicating with Your Angels 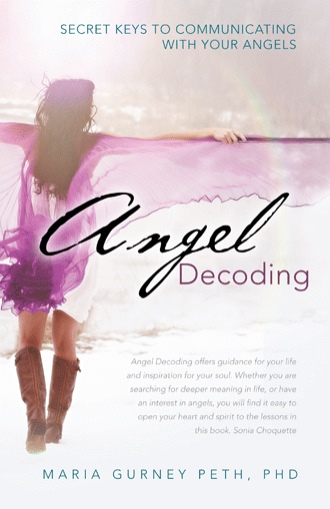 A Vision Brings Peace
I have been privy to many stories involving angels, deceased loved ones, and miraculous, unexplainable experiences. My clients often worry that they are losing their minds because of their visions. They believe they have seen loved ones who died, or they sensed the presence of the deceased in some other way. A woman who had lost her husband shared the following story.
It had been only a few months since her spouse’s death, and Mary had been praying for a sign from heaven that he had made a successful transition to the other side. Struggling with grief, she picked up the bible and began searching its pages for comfort. Between intervals of reading and weeping, she prayed. She whispered her hope into the lonely night surrounding her. Sitting stoically in a cozy chair situated in her bedroom, she noticed a warm, soft glow begin filling the doorway to the hall. Staring in disbelief, she instantly recognized the distinct outline of her husband’s frame. She explained to me that she intuitively understood his message, as opposed to hearing him speak aloud. He shared with her that his presence was meant to soothe her, that he was compassionate about her grief, yet also joyous in his new existence. She could not recall how long her experience lasted, only that she felt strangely comforted and more peaceful than she had in months.
We have been taught that seeing is believing, yet we have also been taught that we can’t see spirit. Perhaps the idea of not seeing spirit has become archaic, especially in this day of instant access and an abundance of technological gadgets. It is understood that scientists will soon develop equipment capable of filming fields of etheric energy. At the present time, Kirlian photography has been used to photograph the human aura, which is better known as the electromagnetic field or the human energy field. Since we can photograph the aura, perhaps capturing spiritual energy on film will be a possibility in the near future. For my client, experiencing the presence of her deceased husband was confirmation enough that seeing brings belief.

Hear Your Angels
“Seek first to understand, then to be understood.”
–– Stephen R. Covey

When I first arrived in the States at the age of six, I knew only a few words of English. In order to understand what people were saying, I listened carefully to the words they spoke, but I also focused in on social and verbal communication cues. Even when I didn’t fully understand the words being spoken, I found I could discern the main points of a conversation by paying attention to what was communicated through gestures, facial expressions, emotions, energy, and vibration. Isn’t this how we all learn to communicate? As young babies, we intuited the grander aspects of speech without needing to grasp the exact meaning of each individual word. As young children, we learned to pick up on vocal tone, rate, and inflection to aid our interpretation of what has been said, and this knowledge often helped us gauge where we stood with our parents and teachers.
Learning to speak in our native tongue was easy due to language immersion. We heard people speaking all the time. We may have encountered language through the radio or television every day. We saw the written word and associated these symbols with mental images as our ears tuned into the sounds and we made connections.
Neural pathways within the brain forge the sounds and patterns of our literary experiences. Research and science prove that language pathways begin to become hardwired in the brain at the approximate age of seven. This is also the approximate time when children enter what educational psychologist Jean Piaget deemed the Age of Logic in his theory of intellectual development.
I am an average individual. However, I count my blessings every day for my pronounced intuitive and psychic abilities. To my understanding, the science behind why I am blessed with these gifts appears to coincide with the theory of cognitive development and language acquisition. At the approximate age of seven, the typical child is naturally shifting to greater use of his or her logical, analytical left-brain. This is when most children begin to question the validity of Santa Claus and the Tooth Fairy. It is the age when children begin to apply analysis and discern more logically. As brain development continues, there is a tendency to ignore the subtle innuendos of emotion while placing more focus on concrete matter, logic, and reasoning.
There are no accidents. The universe synchronistically orchestrated that my arrival in America would land just short of my seventh birthday. I was suddenly immersed in a new culture and unable to speak the language. I used intuition in order to figure out what people were saying or implying. So, at a time when most children are beginning to shift into their logical and analytical frame of mind, I had the opportunity to focus and practice the use of my intuitive, expressive right-brain. Some of the abilities, which are considered right-brain activities include creativity, intuition, expressing and reading emotions, and artistic acuity.
I share this information simply because I have often been asked, “Why you Maria? Why do you have this intuitive gift?” The answer is simple: I had a wonderful mentor––my grandmother––who taught me to trust in God, my angels, and my soul. Beyond that, I guess you could say I was in the right place at the right time.
The circumstances of your own life have brought you to this book. You were guided here to improve your chances of learning a new skill while also learning a bit more about angels. There are no accidents; the timing is perfect for you. You are ready to enhance your intuitive abilities, for the brain is an amazingly pliable organ. All you have to do is begin now making better use of your right-brain, for neurogeneisis––the ability for the brain to forge new pathways––occurs throughout life.

Have you experienced the loss of a loved one and yearned for one more conversation?

Do you want to learn how the angelic realm communicates through messages, symbols, numbers, and colors?

Do you wish for a richer and more meaningful life?

Maria utilizes her intuitive gifts and abilities as a medium to acknowledge the support of divine angels in her life and the lives of her cherished clients. You can benefit from her extraordinary teaching methods as you apply the secret decoding lessons shared in this transformational book.

Maria believes anyone can learn to decode the language of the angels––and as a former public school teacher, she knows how to make learning easy and fun.

Learn to communicate with your angels.
Gain awareness of various types of angelic messages.
Discover how to easily develop your own intuition.

Angel Decoding is a hidden treasure containing helpful, authentic, and easy-to-use techniques that will improve your life through spiritual practice and inspiration.

Don’t miss this step-by-step approach to angel communication. It has never been easier to work with your angels.

Angel Decoding offers guidance for your life and inspiration for your soul. Whether you are searching for deeper meaning in life, or have an interest in angels, you will find it easy to open your heart and spirit to the lessons in this book.
Sonia Choquette - Author of NY Times bestselling book The Answer Is Simple

Maria Gurney Peth, PhD, is a spiritual teacher, angel therapist, intuitive life coach and angel decoding specialist, in high demand for her ability to connect with the angelic realm. Maria has worked with thousands of satisfied clients in personal consulting sessions, life-affirming workshops, and retreats. People are drawn to Maria’s genuine sincerity and natural intuitive abilities. Clients book sessions for the magic and leave with solid strategies to support a centered and blessed life.

Born in Brazil, Maria was separated from her mother at a young age. In the early 1960s, telephones were not a standard feature in every South American home. Through the grace and teaching of her Brazilian grandmother, Maria awakened to her spiritual gifts, embracing intuitive methods for connecting with her mother, who was living more than 5,000 miles away.

Maria believes in living authentically, soulfully, and with purpose. She is a life-empowering spiritual teacher and coach, on a mission to demystify the idea of communicating with angels, and champions the ease with which the skill of intuition can be learned. The passion she brings to working with her angels has been a mainstay of her personal spiritual journey. She believes miracles happen every day.

Maria has earned degrees from the University of Iowa and the University of Denver, with a focus on education and social psychology. She earned her doctorate from the American Institute of Holistic Theology in metaphysics. Maria is a published writer, motivational speaker, and gifted teacher.