Free Will after Life 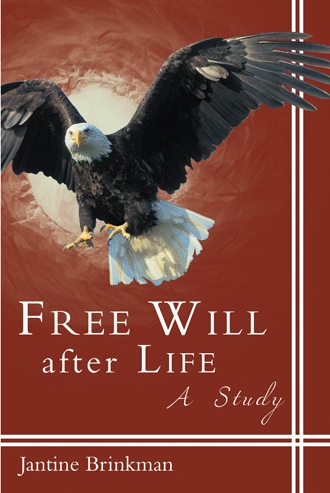 I am a mind-traveler and I love freedom. I started my voyages in my dreams; then I discovered guided meditations, created by various healers and psychologists. Since four years The Monroe Institute’s hemisync technology has facilitated my journeys, and occasionally so have shamanic drumming and relaxation techniques.

As I am also a medium, my journeys now and then consist of helping out souls who got stuck in their afterlife experience, by waking them up, sometimes almost literally from their self-created mental coffins, and showing them alternative paths and solutions. These journeys made it clear to me that freedom with regards to one’s afterlife destiny doesn’t follow automatically upon death. This worried me. As you can imagine, my freedom urges are not limited to earthly life. After death, I will want it as well.

In addition I am an academic. In the eighties of the last century I studied Scandinavian Languages and Literature after which I graduated in Swedish Literature in 1990. I love studying and scientific exploration, so even before I initiated my conscious mind-travels, from another angle of interest I had begun to read about the afterlife. After reading and analyzing many contemporary books on this theme, I felt I missed out on something essential to me. And then, finally, it hit me: I needed to add the freedom theme into my investigations, a theme that touches my heart and soul.

A dive into literature on freedom quickly led me to the notion of free will, which in its broadest definition includes the aspects of freedom of action and choice. Free will is considered by contemporary philosophers an important leitmotiv for the lives of many people in the modern 21st century Western world. I am clearly not alone in my urges. Of course, not all inhabitants of countries with a predominantly Western culture will recognize free will as one of the main features of their lives. Also, the inhabitants of countries with other types of culture, for example Eastern, African, Polynesian, may or may not recognize or value the concept, depending amongst others on their interests, priorities and on the amount of exposure to Western culture.

Free will after life is usually less of a field of interest for those Westerners that consider themselves atheist. Their belief does not include an afterlife.
People with religious beliefs often include an afterlife in their world view, more or less restricted to their particular faith. The portraits of the afterlife in religious literature usually contain a limited freedom of choice: one either goes to a type of heaven, purgatory or hell. God ultimately decides.
The philosophies of Buddhism and Vedic Hinduism also both include an afterlife, in which one’s destiny is ruled by one’s karma. However, actions can be taken during lifetime to influence the karma; humans have free will in these Indian philosophic traditions.
In the past century non-religious spirituality has received an increased attention in the Western world. This has been accompanied with the creation and rise of a variety of spiritual movements. The soul and spirit are basic features of their philosophies, inherited from Christianity, and so are reincarnation, the law of attraction and the karma-like view of ‘what you reap is what you sow’, all adopted from Buddhism and Hinduism. Also in these belief systems you will find quite some afterlife regulation, but most do view free will as a basic component of both life and afterlife. The fact that in the 21st century we embrace freedom in the West, motivated me to research the contemporary literature, produced in the past 30 years, on afterlife topics, free will and aspects of consciousness, and look for possibilities to enhance freedom of action and choice in the afterlife territories.
My intention is to provide those of you who consider these freedoms to be important both in and after life, with relevant information and, if available, with tools to notice and to enhance them after life.

This book is the outcome of a comprehensive literature study; it is not the result of an empirical scientific study. There is no definite scientific evidence available on the existence of any type of afterlife, or of consciousness, free will or freedom of choice in the afterlife. Near-death studies, however, are coming closer and closer to demonstrate the existence of consciousness outside the physical body, in a near-death state. Maybe at some point in the not too far future, there will be substantial, empirical and reproducible proof on the presence of consciousness on all levels of physical and nonphysical existence. In the meantime, to me as a medium and a frequent mind-traveler there is no doubt that such a consciousness exists.

The book consists of two parts:
Part one is the theoretical framework. It contains information on consciousness, free will and the self. Without consciousness, free will is hard to contemplate or even imagine.
In chapter one you will read about the various views that exist on consciousness in mainstream thinking. This is followed by a chapter that captures the studies on this topic that are based on modern physics and philosophy, with a deep-dive into those that have created space for nonlocal consciousness. Chapter three presents the historical and contemporary views in western and eastern philosophy on free will. In chapter four the self is described.
In part two the results of the analysis of free will after life are provided, using the knowledge about consciousness, free will and self as provided in part one, as well as information from esoteric and Eastern literature. The results are presented in four chapters, each focusing on a particular afterlife phase: upon death, the initial steps after cross-over to non-physical realms, the life review and the activities afterwards, and the preparation for reincarnation and post-reincarnational existence. These phases, often mentioned in Western afterlife literature, are mainly used to structure the chapters; I do not view them as conclusive.
The book ends with my conclusion on free will after life.

I hope this book will provide you with new insights and new pathways, just like its creation process has done for me.

Free Will after Life starts off with a trip to the earthly world of mainstream and quantum views on consciousness, free will, and self. The second journey is to the non-physical dimensions, where the knowledge gathered in the first voyage allows you to easily dive into the afterlife territories. There it will become clear that free will doesn’t end at death and, even better, that you can enhance your afterlife freedom while you are still alive.

These two marvelous trips help you take control of your destiny, in and after life.

Counseling medium, spiritual coach, and investigator Jantine Brinkman has extensively studied the phenomenon of consciousness in and after life.

She has also explored afterlife literature, dived into philosophy and psychology, and combined all this knowledge into her book, Free Will after Life. Her mindtravel and soul rescue activities helped her in this enterprise.

She lives in Amsterdam, the Netherlands, and enjoys meeting up with friends and family, reading books and magazines, seeing movies, and visiting the theatre.