I’m Alive My Children are Dead—Or Are They? 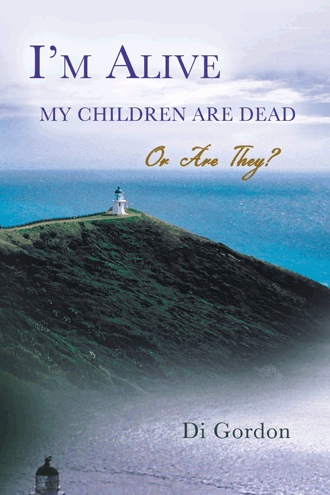 These writings were never intended to be a book—just a record of my memories and experiences that happened to me after the death of my children. The journal became a place of solace—I could express all of my feelings and ideas without being worried about what people would think. Friends persuaded me to ‘tell’ my story after reading some of my journal. You have to finish it—it will inspire and uplift others who have suffered the loss of children and give them hope that their children ‘live on’ after death. Hence the title “I’m Alive My Children are Dead—Or Are They?”

The story weaves its way through the loss of my children in accidents—to deep despair and sorrow—to the joy of realizing that both of them, Aaron and Bindy continue to exist in ‘Spirit’. My journey from grief to healing is a profoundly personal one, and for the very first time I have written of my deepest feelings about what it is like to lose children—and yet—not lose them at all. The reader I am sure will enjoy the anecdotes of the ‘evidence’ that they gave me of their ‘survival’ and the photos that go with them. The accidents happened in Queenstown, NZ— a top tourist town where the majestic high mountains surround the beautiful deep blue/green of Lake Wakatipu. Amongst the great stark beauty of the Wakatipu area death stalked my family—but it also was— and is— a great place of healing. So my story is one of tragedy yes—but it is also healing, inspiring, uplifting and at times thought provoking.

The ambulance pulled up at the accident and emergency entrance of Kew Hospital, and I was wheeled into reception where all my details were taken. I only vaguely remember the proceedings, and was advised I was would be in ward nine. I knew that I wanted to identify Bindy, and see her again to be sure in my own mind that she was dead. It was not to be. I was prevented from going to the morgue by hospital staff and by the vicar who had raced down ahead of the ambulance. He wanted to save me from the horror of seeing her, and had formally identified her himself. I was terribly distressed, and tried hard to head to the morgue, but was restrained from doing so. It was suggested it would be better if I went over to ICU where Doug and Aaron were. That there was more I could do over there for my family who were fighting for their lives, than to identify my daughter who was dead. Your place is with the living—not the dead. There was nothing more I could do for her.

I felt helpless that no one understood my need to see my daughter. The people with me at that time misread my distress, and obviously thought that I would not be able to cope with seeing Bindy. Her head injuries were extensive. My distress, however, was at not being able to see my daughter, and see for myself that the spirit had left her body. They had no understanding that one can help the spirit of the so-called ‘dead’ person for some days after a death. They were ignorant of this procedure and of my beliefs, and chose to make decisions that they thought was best for me.

Just recently on a 60 minutes program on TV a mother was talking about the pain and distress that she suffered when her stillborn baby was taken from her, and buried in an unmarked grave in some cemetery without her being able to say goodbye. She discussed how she was unable to complete the grieving process, and how for many years she had been in torment. In another case, the program showed how a mother and her family held their stillborn daughter, talked to her, stroked her, and videoed the whole process, and several years on, how well adjusted they all were. They were pleased they had grieved openly with this little stillborn baby. It was a wonderful program, and I was so happy to see people insisting on being able to deal with death, and to grieve in ways that although painful, brought comfort to them, and to be able to say goodbye, and to express their love in their own way.

Bindy’s funeral was held on August 2nd, 1974 the day before my sister’s birthday. The whole family was in Kew Hospital, my husband was critically ill on life support, and Aaron who had regained consciousness was still seriously ill. I kept telling my family, not to have the funeral service just yet, just in case Doug died in the next couple of days. I couldn’t have faced two funeral services within days of one another. Doug was so critically ill the doctors gave him very little chance of pulling through. So some days went by, and eventually I decided to make arrangements, and go ahead with the funeral without Doug being there. No one knew when, and if, he would ever regain consciousness. He could hold on for some weeks, or he could die anytime.

The decision was made to have the funeral from the hospital chapel, because we were all still in hospital. The funeral was to be late morning. On the morning of the funeral Doug took a turn for the worst. Apparently fluid was building up in his brain, and they would have to operate. The surgeons were somewhat reluctant to tell me, knowing that I was facing my daughter’s funeral without him. However, they had to have my permission to operate. I went into a deeper state of shock, and felt a terrible panic and fear begin to rise in me. It gripped me around the heart, and solar plexus. I felt as though I could not breathe, and yelled at my father, and aunt, that Bindy’s funeral was cancelled. “Cancelled” I yelled, “It will have to be cancelled. Doug is probably going to die, I can’t face two funerals,” I sobbed. “I just can’t”.

“Get this girl some tranquilizers,” my aunt Else said in her best nursing sister voice. “Get her something to help her through this ordeal” she ordered the staff nurse.

“I am sorry, but she has not been charted anything, and the doctor concerned left strict instructions that she was not have tranquilizers at all,” replied the staff nurse.

He was, however, off duty and after some phone calls, he was finally located. After some persuasion he relented and allowed me one tranquilizer. I don’t think it even touched me. My father and the vicar, Geoff who was to take the service gently persuaded me to carry on, as people had already left from Queenstown and elsewhere to come to Bindy’s service. Meanwhile, Doug was now in theater being operated on.

When faced with a sudden and unexpected crisis, when faced with a death of a child, where your whole life is changed forever, where interacting with life is a huge challenge, where everyday matters are difficult to cope with and life seems insurmountable, how does one go on? How does one gather the strength and the courage to pick up the pieces of a shattered life?

This book is the story of a mother’s journey—of a sudden and dramatic crisis—a descent into darkness and the journey back into the light. It is a journey of hope, love, survival, self-empowerment, and healing. It is a journey she hopes will inspire and uplift all who have lost a child or a loved one. She discovers that her children are still “alive” in their spiritual bodies—dead to this world but alive as shining lights in the evening sky.

Diana was educated at Columba College in Dunedin. She gained a hairdressing diploma in Christchurch and then studied iridology and herbs with Drs. Bernard Jensen and Eugene Watson and hypnotherapy with Dr. Ormond McGill, all from the United States. Throughout the 1980s and 1990s, she gained certificates in Touch for Health, aromatherapy, Jin shin Do, reflexology, and massage. She helped start Taoist Tai Chi in New Zealand and taught it for many years. She has been a guest speaker on natural health and wellbeing, as well as speaking about grief to Lions, Rotary, Zonta, and many other organisations.