The Genesis of Evolution 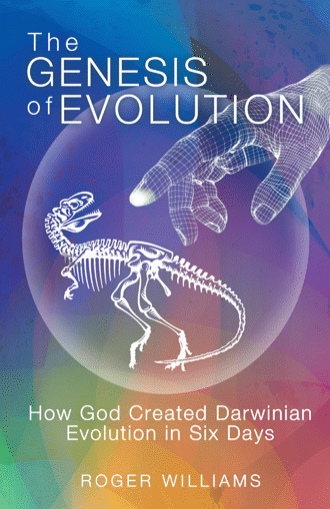 First few pages:  How God created Darwinian evolution in six days is revealed by the resolution of the creation paradox.  So, we will resolve the creation paradox.
We will do this  in a way that maintains the credibility of the Bible and the validity of scientific theories.  The resolution of this  paradox uses the premises and conclusions of the creationists and the evolutionists, and synthesizes the Bible's version of the creation with the fact supported theories of evolution and cosmology.
Once the resolution of the creation paradox is accepted, religious persons and scientists should be able to converse with each other about the origin of mankind.
Although this chapter is not about the nature and resolution of paradoxes, it does look at three routine paradoxes to show that they can be resolved or shown to be nonsense.  If we use comprehensive contexts, have enough pertinent knowledge, and avoid the abstract conundrums that protect them, paradoxes will cease to baffle us.
A "can do" attitude is needed to resolve paradoxes.  We need to see ourselves as confident investigators of abstract thought processes.  When we believe we can dismantle the abstract conundrums that protect paradoxes, the means to resolve paradoxes or show that they are nonsense will be discovered.
Even though we do not always have enough knowledge today to provide a final resolution for some paradoxes, we can still identify what we need to know to determine how a selected paradox can be resolved.
Before we proceed with our paradox resolution exercises, we will peek at the creation paradox in the next section.

The knowledge we will use to resolve the creation paradox is from our culture, the Bible, and science.
The creation of everything from nothing is the creation paradox.  Everything and nothing are concepts that cancel meaning when one is used in the place of the other.  To say one is the same as the other is contradictory and dismissive of the definition of words and their associated concepts.  In practice, making something into nothing or nothing into something is impossible.  One of the laws of nature important to the way our quantitative world functions is the law of the conservation of matter and energy.  This law proscribes the reduction of matter and energy into nothing, and it also proscribes the creation of matter and energy from nothing.  The resolution of the creation paradox includes this law.  God's supernatural powers created this paradox by creating everything from nothing in spite of the law of the conservation of matter and energy.  Did God violate the laws He crated?  He did not --
as we shall see in later chapters.
Since the creation of everything from nothing is an expression of God's will, the authors of the Bible and Qur'an believed His will is what operates His creation.  For these authors there is no creation paradox -- just God's will.
But God did create natural laws to govern nature.  He kept supernatural influence out of the operation of these laws.  The authors of the Bible and the Qur'an were unaware of natural laws and why God created them free from the influence of supernatural powers.  Supernatural powers were sequestered in the dwelling of spirits.  The Bible called this place:  the heavens.  Today we call this supernatural world:  heaven, hell, the other side, etc.
The author of the book of Genesis (some doctrines identify Moses as its author) did not explain why God configured His creation as He did.  This is probably because God's will was viewed as inscrutable.  People were not expected to understand anything that originated from an infinite source.
During the time the story of the book of Genesis was told and written, rulers were despotic, absolute, and could not be challenged by their subjects.  The law of the tribe, kingdom, or empire was the rulers will.  If the ruler ordered the construction of a building, no one asked him for a logical explanation.  Since God was the ultimate ruler, His subjects did not ask Him questions about His creation just as they avoided asking their mortal rulers questions about their decrees.  No one wondered about the creation paradox.
Before the creation of spirits and their world, the Creator's thoughts were about Himself, nothing, and the nature of everything (yet to be created).  When thinking about various kinds of everything, fantastic fiction and what was to be real were mixed and were indistinguishable one from the other.  The absolute flexibility of operation and content of fantastic fiction acquired essence and existence within the supernatural world.  To give the occupants of the supernatural world a sense of essence and existence, the Creator dressed their environment with a semblance of place, movement, structure, and atmosphere.  In spite of this accommodation by the Creator, there was still no limit and no distinction between the supernatural  world and fantastic fiction.  In this unlimited environment there were no paradoxes -- and no creation paradox.
This extraordinary condition ended after the creation of the natural world.  When our world and its laws of nature were created, the limits and distinctions between what was supernatural and what was real were also created.  Within a world of structures, quantities, and rules, the creation of everything from nothing became a paradox.
All paradoxes were made by the Creator.  So was the potential to form abstract ideas and concepts -- real or fictitious.  Abstract ideas and concepts which are not appended to what is real, exist in a world of fiction or metaphysical fiction.  Because of the kind of creation chosen by the Creator, the creation paradox is configured with a mixture of what is real, what is supernatural, and what is fictitious.  To resolve the creation paradox, all three of these domains of thought must be perceived and integrated.
Whether or not the resolution of the creation paradox is established in this book will be determined by the viability of its presentation in the arena of philosophical and theological debate.

In the next section we will look at some of the elements of the logical structure of paradoxes.  Afterward, the rest of this chapter will be devoted to resolving three routine paradoxes.
In the remaining chapters our investigation will resolve the creation paradox.  During this process the Godhead paradox (the three divine beings combined into a single divinity) is resolved as well.
The last chapter will also explain why the creator was motivated to configure the whole of creation as He did.

After resolving three paradoxes, this book describes the creation from the point of view of God, and then it proceeds to resolve the Godhead and creation paradoxes.

The author has written three books. Extensive research on anything written about is the author’s requirement to be sure the facts in his books are correct. The author’s current research and writing are about the development of the thoughts of physicists about the ether and the fabric of the space-time continuum. The author and his wife are retired, try to stay healthy, and live in Virginia.