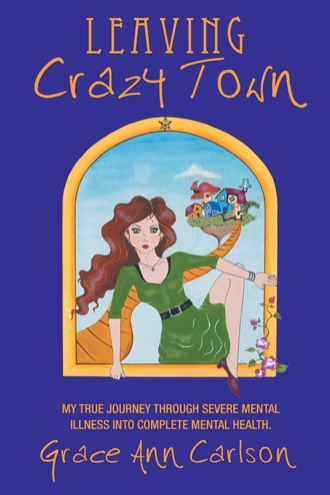 I'll never forget the year my mental decline turned into a psychotic episode. It was 1993. Funny, how that sticks in my mind. I don't remember the year I received my first kiss from a boy, my first bike or even the year I got my first job. But diagnose me as mentally ill and that I remember? This was the year I turned thirty-five years old, I was in a fourteen year marriage and my two children were eleven and thirteen.

Probably the stress of preparing for a long drive across three Provinces to visit Ron’s family played a part in triggering my first full blown break from reality. It was truly terrifying for me, zipping along in the car with four lanes of traffic. The mere idea of leaving my usual surroundings, where I felt a sense of control, was also daunting. Add the fact I was carrying the hereditary gene for bipolar disorder and I was like a hand grenade, with the pin already pulled out.

With Ron driving and suite cases packed, we sped off with our two kids for a three week vacation. The tension across my shoulders, tight jaw combined with the knot in my stomach was a constant reminder of the anxiety I was experiencing. Even knowing Ron was a safe driver didn’t help me relax. The traffic roaring past us, the kids chattering in the back seat plus the static of the radio caused my apprehension to hit a new level of distress that I’d never felt before.

My head swirled with dizziness and my heart pounded as I clung to the seat belt, unable to speak. Then the trembling began to fill my body from the inside outward as my vision turned to black and white fuzzy dots. My mind raced with panicked thought that I was about to die. It was hard to catch a breath and that’s when I let out a sudden scream of sobs that startled Ron and the kids. My tears and gasping for breath caused Ron to quickly pull over and get out of the car to assist me. Stepping out of the car I found my legs wouldn’t work properly, I could only sit on the rough gravel alongside the road. It took a few minutes before my discomfort subsided and we were back on the road. Feeling depleted of all energy and petrified it might happen again; all I could do was sit hoping for the best.

Leaving Crazy Town is written for:

• Family members or friends who know someone who suffers mental illness.
• People suffering any form of mental anguish - from mild to severe.
• Community Service People, Paramedics, Police, Rescue, etc.
• Teachers in the educational system; all grades and levels.
• Mental Health Professionals, Volunteers and Staff.
• Counselors both professional & volunteer.
• Care Givers of any age.

• Tug at your heart strings & provoke thought.
• Help you understand the logic behind the insanity.
• Inspire you with the courage & determination it took to become well.
• Provide glimpses into real psychotic episodes; ranging from mild to severe.
• Teach you specific mental exercises & physical activities to restore mental health.
• Show you how prayer helps when you lose the ability to trust your own mind.
• Teach you coping skills and offer guidance to strengthen healthy thinking.
• Deepen your compassion towards bizarre or eccentric behaviour.
• Provide guidance to master your own mind.

“Nothing is impossible when we realize the potential that awaits us, deep within. It’s as easy as changing your mind and allowing love to grow you.”
G. Ann Carlson

Grace Ann Carlson (nee Clarke) is an inspirational speaker, lay counsellor, Reiki teacher and author. Her personal experience of moving through severe, hereditary mental illness into mental wellness provided Ann the depth of understanding necessary to master her own mind. This true story gives hope and encouragement that medication free, mental health is possible; in fact it is more easily attainable than some people realize.