Memoirs Of A Silent Exhibition 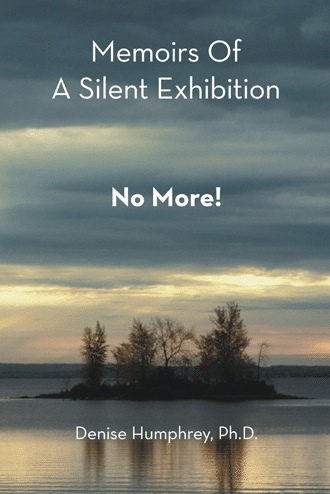 Memoirs of a Silent Exhibition: No More!

“Early evening and we just returned home from dinner with the boys. They were upstairs getting ready for bed, and I went downstairs to load the laundry. John was in his office with the door closed and on the phone, and I heard him talking in a flirty tone, which grabbed my attention. I froze and listened at the same time. A lunch date was being set up for the next day. Hearing his tone of voice, his style of communication, a sense that infidelity was likely to occur again after years of promises that he would be faithful…it felt like a death had finally occurred, after years of illness and pain. I stood frozen and empty. He opened the door and exited with a look of satisfaction and then stopped when he saw me. In that numb state I opened the coffin I’d been in for years and said, “No more, John. No more.” After 21 years of torture for both of us, the time was now; no more questionable resolution; no more agony; no more allowing his falsification. No more. I walked away and for the first time in our marriage took a step in my own behalf.”

This was my journal entry from March of 1999. The tumultuous experience and intense level of emotions from my now former marriage are not present in this entry, obviously because I “hit bottom” that night. John is gay. He knew it at the time we married, but made consistent attempts at dissociating from that part of himself. Even though he was aware of his sexual orientation, it was unacceptable to him. It created feelings of shame, self-condemnation, degradation, and fears of disappointing his family and the world, so he remained essentially closeted for the 21 years of our life together. We separated two months after that night, and John entered the gay community. I fell even deeper into the closet, deeper into shame, deeper into fears of ridicule, deeper into concerns of the effects on our two sons. While that was the first active step in releasing my self-imprisoned life, it took more than an additional decade to disavow my secretive existence.

Memoirs of a Silent Exhibition discloses significant portions of my life that created isolation, shame, obscure identity, and feelings of worthlessness. My internal world was a silent exhibition long before I met John, having been adopted and raised in a family in which I never felt worthy, meaningful or valued. While growing up, this family had an array of problems and I always felt different from my siblings and my parents. As time passed, my feelings became scary to me. I didn’t know who I was, why I didn’t fit in, why I didn’t feel loved, why I was given up by my biological mother….I knew nothing! By an early age I unconsciously identified myself as a mistake to have been born at all, which is how I was conceived…via statutory rape. I felt like a mistake, a fake, and a snake. Over time, my affective development became fixated and I enmeshed unworthiness, devastation, inhibition, suffocation, etc. as the majority of my personal identity.

While growing up, I avoided journaling and writing in diaries because I had a strong fear that someone would find it and read about my personal feelings and conflicts. At one point, however, the needs felt stronger than the risk. This memoir actually includes a large portion of my journal entries from the time I met John, how we interacted, how I was dealing with my adoptive family, feelings during the marriage, how I learned about his being gay, how it affected our children, how I met my birth mother, and how we transcended the trauma.

When I met John, we were both obtaining a master’s degree in piano performance. He was an outstanding musician and we performed duets together with an appealing balance and blend of sound and tone. I truly believe that was a powerful reason I was drawn to him, along with the sense of his laid-back personality. He was so much calmer than me.

I spent years both alone and in therapy processing my conscious and unconscious belief system to understand the reasoning behind marrying a gay man and remaining married for 21 years, even though the knowledge was obtained fairly early in our relationship. I am certain that my childhood experience was directly, although unconsciously at the time, related to marrying John and remaining saddled after the knowledge was uncovered. It stifled my ability to be free, open, and honest with others. It was just another form of being closeted and feeling dead while alive. I have always acknowledged my weakness of shame and secrecy to myself, and now want to cease the imprisonment, shed the emotional weight of concealment and camouflage, and live a more spirited life by choosing to disclose.

John was and IS a wonderful person and father. Despite the 21 years of tragedy and humiliation while being married and living together, there was also love and companionship, and still is. We spend all birthdays and holidays together and help each other if or when needed. We still travel together; we still play piano duets together. We will always be devoted to our sons and will always be co-parents. The decision to end the marriage was astronomic for me and in some ways will always feel like bereavement. Nonetheless we are now outstanding friends with mutual respect for each other. I feel that our experience of pain, sadness, acceptance, forgiveness, and eventual resolution will be extremely important in helping people surmount their problems, whether in a similar situation or not. I now have the complete belief that our personal thoughts create our personal emotions. Unless there is a physical or mental health problem that significantly interferes, we all can improve our thinking, which will then improve our actions, our personality, our beliefs, and our level of functioning. As stated by Iyanla Vanzant, “When you stand and share your story in an empowering way, your story will heal you and your story will heal somebody else.” My dream is that other families in a similar situation learn that they too can keep the love of the family united.

My personal story is just that…my personal story…with no indication that every straight person who enters and remains in a mixed-orientation marriage has psychological features such as mine that formulate their decision whether to divorce or not. Everyone has their own life story. Memoirs of a Silent Exhibition unveils my legend, not only to purify myself, but to share my beliefs that although there are many aspects of our human existence that we have no control over, there are also ways to outshine suffering. We have abilities to readjust our fixated thoughts because there really ARE more things we can ascend than our rigorous and embedded belief system holds. By reading this story, you will follow my journey of tragedy and turmoil that eventually arrived at reverence and resolution.

Within the first few months of her marriage, Denise Humphrey learned that her husband was gay. Tortured by intense and conflicted emotions she existed alone and shut away from life as if in a coffin, both during the marriage and the decade after.

Denise and John loved each other in many ways, making their situation very tragic. They met each other as classical pianists, performed duets together, enjoyed each other’s company, and wanted to be parents. At the same time, parts of their lives were closeted from other people, as well as from each other.

Early in the marriage, John became a medical doctor, and later Denise became a psychologist. After having two delightful sons they both absolutely loved and adored – and still do – the torment of her shuttered life increased even more dramatically because of intense fear that her feelings of shame and secrecy would be passed on to the boys.

Throughout the memoir you will embrace the enormous struggles Denise endured, how she eventually decided to end the marriage, how Denise and John disclosed to their sons, and how all four of them grew even closer through the process. This memoir reveals its resolution and miraculous metamorphosis. Life tragedies can be surpassed!

Dr. Denise Humphrey is a clinical psychologist and has received literary awards in this profession. Her book is a memoir of having been married to a husband who turned out to be gay and how the family dilemma was surpassed. She lives in Dallas, Texas, and runs a private practice.