A Journey through Time 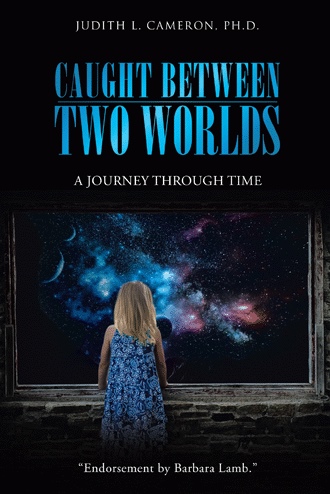 …After a few hours, I felt a strange sensation that caused me to wake up. I looked at the clock and it said 12:00. It was so dark and so quiet, that it seemed a little eerie. I looked up through the skylight, and saw a blanket of stars…I had a compelling urge to go outside. It was not unusual for me to wander about outside in the middle of the night because I enjoyed the night. I truly had no fear then…As I got out of bed and stepped onto the floor, the floor made a loud creaking sound…I was afraid I was going to wake up my grandparents, but I didn’t…As I reached for the doorknob to open the door, I tried turning it as quietly as I could…As I opened the door very slowly to try to go undetected, the hinges make a c r e a k i n g sound, which I was sure everyone could hear. I knew it was just the old house moaning because it was being awakened in the middle of the night…. “Oh, no,” I said to myself as I headed for the laundry room. I knew as soon as I stepped into that room, Sissy and Puggy would go nuts and start barking. I had not thought about that. But yet, something was drawing me outside…Then I remembered the top latch on the door. “How am I going to get that open,” I pondered, “because it is so high up?” The floor made a creaking sound as I stepped into the laundry area. Expecting the worse, I stopped and held my breath. Nothing! As I looked over toward the dogs, I realized that both of them were in a deep sleep. “How weird,” I thought, as I moved toward the door. As I looked up at the latch, I could not believe that it was not latched….As I stepped outside on the cool grass, I held the door so that I could close it as quietly as possible…It was so beautiful outside. I took a deep breath and allowed the scent of the hay and barley into my nose. It was a wonderful clean smell that reminded me of being in the fields outside. As I stood there for a moment, a warm breeze kicked up, causing the wind chimes to play their beautiful music. I closed my eyes and enjoyed the feeling of the breeze caressing my face and hair as it passed over me. It was as if the wind chimes were trying to tell me a story; a story of adventure and mystery that would become a part of my life forever…I opened my eyes, looking out over the back pasture into the depths of wheat and barley. The blades of the crops were gently swaying in the breeze, causing me to relax as I stood there mesmerized. Suddenly, my attention was drawn toward the pump house. I heard what I thought was movement. For a moment, I thought it might be a raccoon or a coyote coming around to try and get into the turkey shed. I figured if it were a coyote, Louie, the hired hand, would chase it away…As I was standing there….I listened….I could also sense something or someone was there, but I could not see anyone. I thought maybe it could be Louie, and so I whispered, “Louie, is that you?” There was no answer, only stillness….Just as I was beginning to shrug it off and continue my walk, I heard the crunching noise again. It was the sound of something moving across leaves. I stopped dead in my tracks once again. In my mind I started to visualize wolves, bears, and all of the big animals that a six year old could conjure up….While my mind went through these mental images, other images began to appear also. These were images of some kind of children. They looked different from anyone I had met before, but I was curious. I watched with my eyes closed as these images continued to interact with my mind. I remember being fascinated with the whole thing. These children had no hair, and very large eyes that seemed to be black in the middle, like our eyes, but bigger….They also did not seem to be very tall. As they looked at me in my mind, they seemed to smile, although their mouths were very small, almost like a slit….Fearing nothing, I started to walk toward the pump house. I became aware very quickly that I was barefooted because I stepped down on the walnut husks that had fallen to the ground underneath the walnut trees along that side of the house. Why I did not venture over to the walk way, I don’t know, but something compelled me to keep moving forward in the direction of the pump house….I could feel the warm breeze blowing across my body, and hear the beautiful music it was making as it partnered with the wind chimes….I was feeling such a longing for something I did not understand, but that kept me moving forward in that direction….Moving away from the orchard now, I could see the full moon high in the sky illuminating the whole parking and pump house areas. As I stepped off the walkway towards the pump house, I suddenly came to a stop. Startled at first, for a moment I just stood there taking it all in. There were two small figures standing there, about my height, or perhaps a little larger, but not by much….These two little figures were silhouetted in the moon glow. I realized that these were the “children” I just had seen in my mind. I knew they were from another planet just because they did not look like me, but the feeling that I had being there was like I had known these people before….

This book by Judith Cameron, PhD, is the true story of her ongoing encounters with benevolent extraterrestrials and the education that she has received from them throughout her life. She had a lucid dream that told her that part of her life’s work was to train to be an ambassador—a liaison between Earth humans and extraterrestrials when those extraterrestrials came en masse on their first contact mission.
Follow Judy’s adventure, from being a child of six and meeting her first extraterrestrials, to the present-day encounters, many of which are a result of her training to become an ambassador to the universe. You will learn about the Galactic Federation of Light and their representatives on Earth who have continued her learning and training. Sheldon Nidle of the Planetary Activation Organization and Dr. Steven Greer, MD, founder of CSETI, are two of the selected teachers whom Judy has chosen to work with.
Judy’s encounters have taken her around the globe to places such as Bora Bora, one of the Tahitian Islands, Orpheus Island, Australia on the Great Barrier Reef, Hawaii, and the Great Southwest of the United States. Working as a public school teacher for forty years teaching all grade levels and at NASA as an education consultant, along with her work as a doctor of clinical hypnotherapy, has given Judy the background and credibility that she needs to carry out her mission. Follow Judy now as you learn of the wonderful possibilities for our future Earth.

Judith L. Cameron has spent the past twenty-six years helping others understand their encounters with extraterrestrials. With PhDs in clinical hypnotherapy and parapsychology, Judy brings much experience to her practice. Because she has experienced extraterrestrial contact herself from the age of six, Judy’s possesses the insight and experience to help many people.