When Fear Is Not an Option

You Can’t Run Away from Your Feet 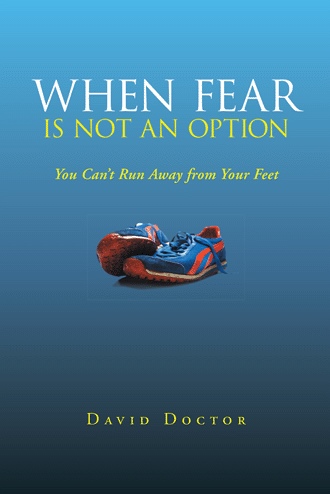 In life all people face hard times. They have fears about the future, about losing their jobs, their homes, their families, and their health. As an individual, you may feel like your problems and fears are all yours, and you may feel all alone. Your thoughts are focused inward, and the fear consumes your time. You are seeking a way out, an open door, a way to find more money, more security, more help, more compassion, and more reassurance. You are hoping the feelings will pass and the fear will go away. Your life may feel like a giant vacuum cleaner has sucked your dreams, your life, and your confidence away. Fear can make things look hopeless; fear can freeze you in your tracks. Mark’s fear scared him so much that he was frozen and not able to run or fight for his own life. The question was and always will be whether he was tougher than the fear. Whenever Mark smelled chlorine in a swimming pool or bleach when doing laundry he was transported back to when he was just 10 years old and taking swimming lessons. He remembered standing on the edge of the high school’s Olympic-sized pool, wanting to run away but too obedient to move. He felt the extreme anxiety, the raw, knee-shaking fear and the panic of entering the water. He wondered if those feelings would ever go away. Mark was thinking of the time when he was a young Boy Scout taking swim classes for his First Class merit badge. He remembered standing in line on the side of the pool, shaking from cold (but mainly from the intense fear) and hoping something would happen to stop, delay, or end the pool session early. Can fear so occupy the mind that a person cannot function logically, focus on learning something new, or ultimately save his own life? He thought, “What have I done to deserve this water torture?” Would he drown today? Would he drink chlorine water and swallow air until his stomach was full? What would he do if he could not swim to the side of the pool? Would a hand be there when he would need it? What kind of torture must he endure? Would he continue burping chlorine from swallowing air and water? He thought, “God, what have I done to deserve this water torture?” Mark was trying to listen to the instructions but didn’t believe what they were saying. All Mark was thinking was that he was only 3 ft. 8 in. tall and the shallow part of the pool was four feet deep. The water was over his head, and he could not breathe water. Who would save me if I get in trouble? His mother and father always took care of him, but they were not there to save him if he had a problem. Fear occupied Mark’s mind so much that he was not able to rationally think of a solution or to apply the concepts that the swimming instructors were teaching. Mark was being controlled by his fear, and he was losing the battle for his mind. Why does fear stop a person from listening to reason, or from overcoming his or her fears and seeing a clear solution? Mark needed to pass swimming lessons to earn the First Class merit badge for the Boy Scouts. His father and mother put him in the swimming classes and expected him to pass. He was from a big family, and the money for these classes was hard to come by. Mark was scared out of his wits, but fear held him back from believing he could learn to swim. Mark was a quiet and shy child, and he would not have said he was scared (male pride, possibly), and he was raised in a time when you did not disobey your parents, elders, or other adults. It is not clear why Mark was afraid of the water; there was no traumatic event to cause the fear. Maybe it was the fear of the unknown, or fear of failure, or a lack of confidence in the water. Mark was enrolled in the swimming class to pass it, not to waste time or money. He wanted to be a success and make everyone happy, but fear had a hold on him and he just wanted to go home. Yes, this was Mark’s thinking. No matter what was going on inside Mark’s mind, he tried to act as if things were great. He tried to make people believe he was happy and then say what he thought they wanted to hear, while deep inside he was thinking, “What the hell am I doing here?” Mark was shaking like a leaf in the wind—he was cold, the pool was big, and the water was deep with that nasty smell of chlorine permeating the entire pool area.

Fear is the driving component to either move you forward or to stop you in your tracks. The choice is always yours; you can turn around and run away or you can move toward that which you fear. Failure is an option; fear is not. When you turn from the wall of fear and go back to your comfort zone, life still goes on, but you miss out on everything that is on the other side of the wall—all the opportunities that may come from going through the wall and struggling past your fear.

Fear is not an indicator that you are doing the wrong things, that you don’t have talent, education, or that you are in the wrong place. Many times in life you can be on the right path, pursuing your dreams, but you are scared to death.

David Doctor is a retired US Navy Chief and Explosive Ordnance Disposal Technician. A graduate of the State University of New York, David lives in Las Cruces, New Mexico, with his wife, Xuhong. He currently travels around the United States working for the US Army Corp of Engineers, cleaning up explosives and unexploded ordnance on old bombing ranges.