key to Self, Soul and Purpose 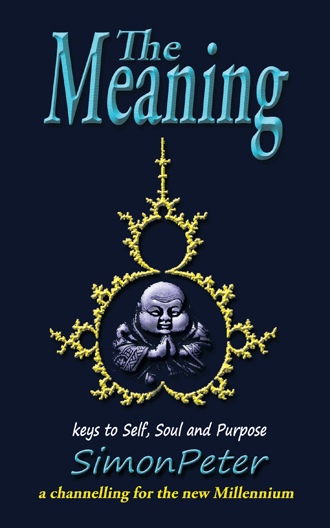 Outside a car screeched to a halt followed by the sickening crunch of metal on metal. Horns started blaring and voices raised in anger echoed up to my window and bounced around the room.


I had been having a conversation with a disembodied voice inside my head for what seemed like hours now. I glanced at a digital clock on the counter near the stove. It read: 1:15am.
What? I was damn certain I’d started this talking-to -myself business sometime around or just before 1:am. How can so little time have passed for what felt like several lifetimes of profound experiences?
And not only was I a confirmed schizoid with a multiple personality disorder, my mind distorting reality and time, now I was being told that if I found out more mind-boggling bits of cosmic trivia I would have to die! But to know what my purpose in life really was……….?
“You mean if I know too much you’ll have to shoot me?”
“What is death?”
“How about the cessation of life?”
“Death is the transition from one form of existence to another.”
“Yeh, I got the death bit, but what’s the use in telling me my purpose in life just as it’s about to end?”
“Because you need to know, you cannot help yourself.”

Well, there was no doubt my curiosity was certainly piqued if not downright alarmed!
“But this knowledge is a great responsibility. If I reveal your true purpose in life it will bring the destruction of Mankind, to all Life as you know it, that much closer. Are you willing to bear that responsibility? To take that risk? To make that choice?”
“What, you mean a little schizophrenic self-talk could mean the end of Life as we know it? I have to say I find that a little hard to believe.”
“So you are ready go on?”
“Yeah, so long as I take everyone else down with me, why not? At least I won’t be alone. Shoot!”
“Lie down. You will need to be completely relaxed.”
I looked around. Ah, the sofa in the lounge room. Yes, the good old couch. The Psychiatrists’ friend, the actress’ enemy; the lover’s delight! So many profound moments of life seem to revolve around the sofa, it was a fitting enough place to receive the greatest secret known to Man…other than where that damned TV remote went, of course, and anyway you could die in worse places. Like the middle of the road, the gutter, or on stage in front of a cold, silent crowd….
I lay down.
“Close your eyes and breathe. In… hold… out… hold… in… hold… out…”

I breathed in to a count of seven…held it for a count of seven, then breathed slowly out for a count of seven. Eventually, the lateness of the hour and the intensity of the experience wore me down to a semi-conscious drift. As I floated in that space between time and tide, my mind nowhere in particular, all the many sounds of my life faded and merged into a general background wash. The reddish glow behind my eyelids resolved into a muted, dense black.
In the moments that followed a series of startling images began to pulse into my mind. Behind my eyelids, flashes of bright light pulsed intermittently. Then a familiar, growing vibration began in the centre of my head. The vibration was like a sound you could feel. When a certain pressure had built, the vibration exploded in my mind with a physical jolt. I felt myself spiralling up. It was the same sensation I had felt when I had astral, out of body experiences. I called it the “buzzing.” It was like a horde of bees inside my mind lifting me, spinning me higher and higher.
I moved through a coruscating dance of colour and light and felt a joy and bliss I could scarcely endure. After a time in this state of heaven, the colours and light began to resolve themselves into something heavy and dense as a kind of darkness descended.
The vibrations settled and I found myself suspended beneath an empty, leaden sky above a darker, limitless gun-metal-grey sea. It was completely still. It had an almost brooding, physical presence…a viscous weight, and though I could perceive nothing but a neutral, sullen grey, there was about it a sense of tension. A sense of the density of life. As I observed it I could feel the weight of not just my own physical body, but my whole life somehow attached to this vast, infinite expanse. Not a lifeless waste, but a sleeping sentient sea.
As I focused on the surface, I was impelled toward it, floating (or drifting). I panicked and held back. My existence seemed to be an integral part of this mass of grey almost-nothingness and I wasn’t sure I could face that.
“The Veil. It is what confronts us all. The Primal Truth. It is the sum of all our parts. Our histories. The realization of what we truly are and why. The Akashic Records...if you like.”

The Meaning provides a revitalizing, compassionate paradigm for the incoming consciousness shift, that celebrates the joy of who you are NOW…that acknowledges your spiritual perfection NOW and the purpose-filled lives you are leading. If what you seek is to be free to be just as you are now... freedom from guilt...freedom from the cycle of karma with a chance to realize your purpose NOW...then "The Meaning" is what you have been waiting for.

SimonPeter has spent his life exploring notions of God and spiritual purpose through the lens of religious and New Age thought and practice. His dealings with Shamans, spirit channels and his own experiments with metaphysics have opened up the profound and limitless possibilities of Life, the Universe and Everything Else!