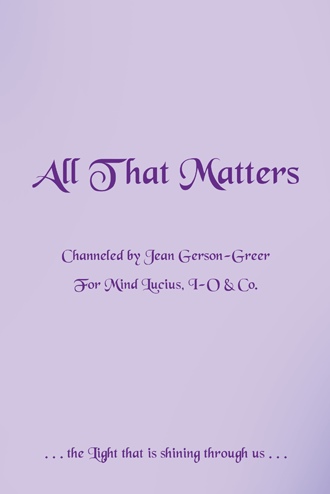 We often wonder why we are here, what we are to do with our lives, and why everything is the way it is for us: why we are so constantly in emotional quandaries, why relationships just don’t work out for us, and why we usually go through our days as we often do, in a rut of some kind or another.

Follow the adventures of Emma, her feline companions, and her dear friend, Harry Jonathan Spruce, in her quest to solve the problems associated with his family home in Maine which have affected his entire life.

This mystery has been psychically dictated and deals with all sorts of phenomena that enable all involved in the story to find out what the LIGHT is and how the changes they make for themselves affect not only everyone around them but the entire planet as well. It illustrates to the characters in a small Maine community how all of them and all of their actions have been connected since the beginning of time, and why this has been so.

Born in New York City, Jean Gerson-Greer has been channeling and healing since her birth. Her training is through her life experiences. She studied with many masters encompassing a wide variety of modalities. Her widely read articles in Sedona, Journal of Emergence! (1995–2000) were lauded by the worldwide readership.

The first group that worked through her, THE LAMPLIGHTER, coalesced into MIND LUCIUS, I-O & CO. Some of these beings include: The Archangelic Forces, The Shining, All That Is, The Sun Behind The Sun, The Ancients, Sai Baba, and even entities from The Below World. Her writings are a blending of these and other voices.

She was a teacher in the New York City schools and is also an actor and active member of the major theatrical unions.