Jerusalem Diary: Searching for the Tomb and House of Jesus 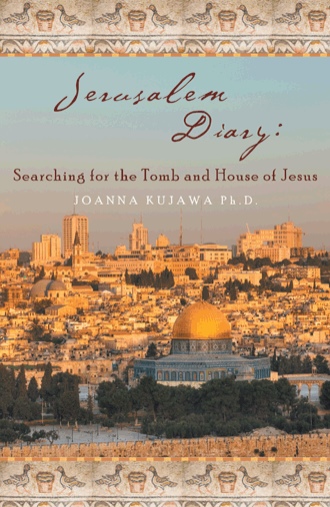 HOUSE OF A TRAVELLER

‘This is the key’, the woman said. She was tall and dressed in black, with a touch of the gothic. ‘I don’t think he uses any of that much.’ She looked around. ‘Nice place, actually.’

We were in Richmond, Melbourne, and the woman was handing me over the keys so I could house-sit, or rather, have a place to live, until I sorted out my mess. The moody, rainy day fitted my state of mind well.

I looked around. The place was spacious and nearly empty; there was a certain hollowness about it — a feeling that no one had really lived here.

‘A traveller? Where does he travel?’

‘Mostly Jerusalem and Cyprus, I think.’

I took the key from her and dropped my suitcases. There were still some boxes of books waiting for me in front of the house. Traveller? One traveller sitting a house for another. I walked from room to room and decided to settle into the studio at the back of the house, regardless of whether or not he might agree to rent it to me later. The walls were empty and I was disappointed to see there were no books in the house — or so it appeared at first. Books are the soul of every traveller’s home, however fleeting their stay. I knew the tension of the freedom between travel and adventure and the desire to belong and have a room of one’s own. The tension every traveller lives.

‘When I have my own space again’, I thought, ‘I’ll give it more life — like the places I had in Toronto and Kuala Lumpur’.

I unrolled my Mexican rug with its Aztec Warrior (to give me strength and courage) onto the floor and on the empty shelves I placed a few pictures from Canada, Cambodia and Malaysia (to give me some continuity), along with my Guru’s books (to give me guidance) and meditation CDs (to help me find a way to Bliss again). These were all both valuables and possessions.

I went into Steve’s storage room. Maybe it wasn’t my business, but I couldn’t help myself. I was too curious about him now. Earlier, on the kitchen counter I found a photo of a tall man snooping among some ancient ruins somewhere. That photo spoke to a forgotten part of me that had dreamt of exotic adventures. I was fascinated by this man I had never met before. ‘It must be him’, I thought. Lying on the floor were stacks of books: The Gospel of Mary Magdalene, The Gospel of Thomas, The Gospel of Judas, The Urantia Book. I dusted off the covers as I browsed through the familiar pages.

In my twenties I studied such things. When I was six my mother took me for a walk to a university and said, ‘One day you will study here’. Her statement could have had something to do with the fact I was brought up in Poland during the worst political and economic crisis in Eastern Europe. Back then there were only two choices: either you became a drunk (even in a crisis there was still plenty of vodka for desperate workers in a communist state), or you became an intellectual (even in the worst crises, you could go to the libraries and read philosophers — especially if they had been dead for a long time and hadn’t had the chance to contradict Karl Marx). I decided that being an intellectual was the better choice, since I had never had a head strong enough for straight shots of vodka. So I went on to university to study philosophy. Sometimes I think this was a gift. It depends on the point of view, you see. In Poland there were no distractions, no drugs — only a black and white television with two channels. Which was just as well — I became a philosopher and a writer. I was especially drawn to medieval philosophy and history, which was as far from the morbid form of Eastern European Marxism as I could imagine. Shortly after I began my studies in Poland I left for Paris and then Canada, where I gained a prestigious scholarship from the University of Toronto to study esoteric medieval philosophy texts. But life is never that simple. Underneath my scholarly explorations I secretly dreamed of exotic adventures.

‘Mostly Jerusalem and Cyprus.’ I thought of Steve the traveller as I was browsing through his books. ‘He sounds like a medieval pilgrim.’ And I left it at that for now.

I soon sank back into panic and anxiety. On the tram to Chapel Street I looked through the unemployment assistance forms, feeling sick in my stomach. The tram passed by apartments on the Yarra River and slowly moved on to boutiques on Chapel Street. The closer we got to High Street, the more my feelings of nausea increased. By the time I had joined the queue for the unemployed I was feeling faint.

‘How much did you earn in the last fortnight?’ the woman at the counter asked a tired-looking man in a worn-out blue jumper who was handing her his form. ‘A hundred and ten dollars? We have a report from your employer that you earned a hundred and ten dollars and eighty-five cents!’ she exclaimed triumphantly. ‘That’s called falsifying records.’

The man in the blue jumper cringed and tried to explain himself to the woman, but she didn’t look appeased. He shrank a little more, then more again, until he almost disappeared under the counter. The woman stamped his form with a warning; the man sighed with relief and thanked her profusely. At that moment I wished I was a samurai and could cut her head off with one precise move.

I crossed the street and waited for a tram. Chapel Street, usually so lively, was soaked in a grey rain. Young men walking down the street looked shabby and wasted. Or maybe it was me? I saw my reflection in the pharmacy window, my wild hair caught by the wind and the rain — I looked like a blond medusa on a bad day. I had no umbrella with me and stood there by the window thinking, ‘So this is where twenty years of education and travel has brought me?’ A great wave of despair was building up in my belly, like a persistent, sickening feeling.

My mind was racing back to my past. What has gone wrong? Until recently, things had always been falling into place. After I received my degrees in Toronto, I was asked to teach at an Australian university in Kuala Lumpur and then to finish a Ph.D in Melbourne. The scholarships ended with the Ph.D, which I expected, but the jobs I had believed would become available to me never materialised. Suddenly, all the doors had closed. People whom I used to work with and who could have helped me get a job again were moved away from my path. Consumed by my studies, I did not know they had fallen into disgrace; even mentioning their names on my CV was an act of self-defeat. In the end, I managed to get three hours tutoring a subject in which I had previously lectured and developed. I could have got another three in another department, but the dragon lady in administration decided it was not desirable for one tutor to work in two separate departments.

‘I have no money to pay my rent’, I begged her to no avail as she enjoyed her superiority behind her desk.

For a while I stayed afloat by taking care of an elderly person until, through a friend, I had learned about the possibility of house-sitting Steve’s house and perhaps, after he returned, staying in the studio at the back. That solved my rent money issues for now.

By the time the tram finally arrived I was soaking wet and looking less like a medusa and more like a wet fish, my hair sticking to my head like disjointed fins. I hopped onto the tram enthusiastically. Five minutes into the trip I realised I was going in the wrong direction.

Based on a true story, Jerusalem Diary: Searching for the Tomb and House of Jesus is an adventurous journey of intrigue and discovery in the Holy Land. After finishing her PhD, Joanna joins two Australian men who claim to discover new sites that could be Jesus’ home in Nazareth and his tomb in Jerusalem. As they travel through Israel, Joanna challenges conventional ideas about the life of Jesus. Relying on Gnostic Gospels, Joanna deconstructs the dogmatic images of suffering Christ and creates an alternative picture of Yeshua (Jesus) as a young, rebellious, inspiring teacher.

“This engaging book has everything the passionate-thinking person desires: intensity, intrigue, controversy. Thoroughly enjoyable and thought-provoking. A book for all seekers.”

—Mark Manolopoulos, adjunct research associate, Monash University Centre for Studies in Religion and Theology, and author of If Creation Is a Gift.

“In Jerusalem Diary, Joanna affectionately traces the life of the human side of Jesus. She beautifully weaves her own spiritual quest for truth in this well-researched, deeply passionate journey, accounting for typical historical gaps in the life and teachings of the Great Soul. The outcome is a refreshing and unusual tale in which Joanna elegantly contrasts and reconciles the Christ on the Cross of the Church with Yeshua, the revered realised Master of the East. A must-read for every sincere seeker of the Self.”

Dr Joanna Kujawa is an author, traveller, and scholar. Her short stories and essays have been published in Australia, Canada, the United Kingdom, Germany, Malaysia, and Poland.