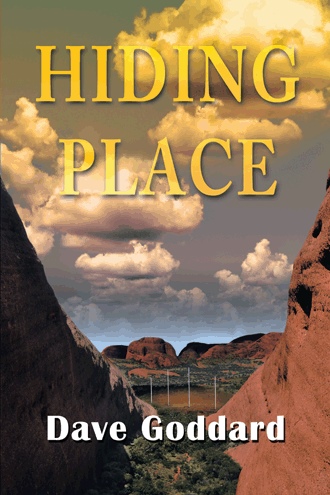 He’d parked the old Kombi in the red-dirt, treeless, parking-bay beside a mound of dirt. He needed to stretch his legs and try to wake up. The sign at the exit from the bay said, ‘Marla Bore 20 kms’.

He leaned against the side of the old blue Kombi, took off his filthy peaked cap, and lit a cigarette. It was late on the second day of the journey. The side rear-vision mirror showed him a dusty, haggard, red-eyed bloke with a face covered in stubble, clothes and cap soaked with sweat and stained red and someone who hadn’t washed for three days.

But he didn’t care. Who am I going to meet that would give a shit?

He gazed at the country. It was as if a half-arsed deity had dumped boulders and rock over a vast area, flattened them very quickly with a huge compactor, and left many mounds between which glittering-white salt-pans proliferated. No vegetation of any note was visible, as if the deity, after viewing the effect, had shrugged and buggered off.

To Mick, the sight seemed to go on forever. He was two thirds of the way to Alice Springs with no real reason to go there and no idea of where to go after that.

His old Kombi had chugged along at 70 kilometres an hour since he’d left Adelaide at 5.00 am yesterday. The first three hours had been through farm lands north of Adelaide which he knew well. The coast of the Gulf of St Vincent, and above Port Pirie, Spencer’s Gulf were to his left, and to his right were hills that gradually rose in height to become the Flinders Ranges. After Port Augusta and the Flinders had faded behind him, all he’d seen was the now stony, treeless countryside.

The temperature had risen steadily over the first day, causing him to stop several times to allow the engine to cool and to top up the radiator. Memories of his days fencing around Quorn and Wilmington and out on the Eyre Peninsula had taught Mick to carry plenty of water, particularly when driving his decrepit Kombi.

He guessed, by midday, that it was around thirty-five degrees. As the Kombi had no air-conditioning, he’d shed his trackie top not long after leaving Port Augusta, and had driven with the windows open.

After twelve hours of nursing the vehicle on the first day, he pulled into a roadside stop just before Glendambo and slept on a mattress in the back. All he had to eat was some bread and cheese he’d grabbed from the fridge as he’d departed.

As hot as it had been during the day, he found he needed all his clothes, and whatever other covering he could find, during the night, as the temperature plummeted. He rose at 5.00 am, shivering in the frosty air, as the sky began to grow pink in the east. He stopped for breakfast at one of the two service stations that made up the town.

Beyond Glendambo lay Cooper Pedy, which he reached about lunchtime, nursing the old wagon along at the same rate. He refuelled and bought a sandwich from a roadhouse. He didn’t notice the unique nature of the place, much of it underground, as people had constructed dwellings, shops and even a hotel out of old opal diggings. All that filled his senses were events in his recent past and the flat, shimmering desolation of the present.

Now, late afternoon on Thursday, he was close to Marla Bore. He stubbed the cigarette and drove the last twenty kilometres. Marla sat to the right of the highway; a motel, a roadhouse, two houses and a yard filled with machinery. Just before the entrance to the roadhouse, a sign pointing to the right along a dusty track said, ‘Oodnadatta Track, Oodnadatta, 216 kms’. But thankfully, the Marla Roadhouse and motel were surrounded by white gums, many straggly but a few flourishing. They were the first trees he could recall since Port Augusta.

He stopped at the roadhouse. It had a bar and restaurant, beckoning him to have a drink and a decent feed. He noticed, however, as he walked into the place, two people he’d passed, and the waitress at the counter, all gave him unpleasant looks. As he stood waiting for her to serve him, he understood why. He stank.

He managed to wash standing in front of a sink in the men’s toilet, changed his shirt and found a spare pair of underpants. When he returned looking cleaner, cap off and longish blond hair visible, the waitress even gave him a smile. As well as food, he found a rug in the roadhouse, which he bought because of his experiences the night before. Then he chugged out of Marla to a roadside stop to sleep.

As he neared Alice Springs the next afternoon, Mick stared at the highway without seeing it. He knew he was close to Alice because the road signs told him so. But suddenly and spectacularly, the countryside changed. Flatness gave way to high ranges as he neared the town. It was as if he were driving into an impenetrable barrier of rock that stretched as far as he could see east and west. But just past the airport, the scenery changed again.

Seeming to loom over him were stark, red hills, with sheer cliffs near the summit, guarding the past like monuments carved from history. On one hill, the striations of rock were vertical, as if a huge hand had tilted the hill on its side and left it there. But between the hills was greenness, like parklands, with grass and trees growing on the edge of the startling white sand of a dry river bed.

And then, without warning, a cutting in the range of hills appeared, no more than a hundred metres wide, through which the dry river bed passed. The road and a railway line clung to one edge of the cutting, which a sign told him was ‘Heavitree Gap’. As he drove through the Gap, the brilliant redness of the hills and startling whiteness of the sand were contrastingly blinding in the late afternoon sun.

He’d headed this way to find his family and the history haunted him. At times, it made him feel ill, and at times, it caused him to blink and wipe his eyes.

“Here’s some pidgin, Mick,” and Garrick spoke rapidly. “Who been dat pella? Where him been prom? You been subby him? Him been talk punny way, ay? Him been kardiya bloke.”

“What?” Mick shook his head quickly.

“I said, ‘who is that man? Where is he from? Do you know him? Doesn’t he talk in a strange way? He’s a stranger in this place’.”

It’s 2017. Mick Wilson’s wife has taken off from Adelaide with a long-haul truck-driver and Mick’s two little kids. In an attempt to find his family, Mick, a brick-layer and former top-level Australian Rules footballer, blindly heads for Alice Springs.

In Central Australia, where many people go to hide from their past, Mick finds a different and challenging world. He stumbles into work on a remote cattle station, with an Aboriginal community close by. He also finds three very different women who shape his destiny.

Racial tensions, tangled personal relationships, a mysterious mountain range and a struggling Aboriginal community and football team force Mick to become part of a strange new world and way of being. Across a cultural divide, new understandings emerge in the most unlikely ways.

Through it all, Mick searches and aches for his kids, but because of the people he comes to know, he’s never alone.

For more than thirty years, Dave Goddard has lived in remote areas of Western Australia and in the Northern Territory, working with and learning from Aboriginal peoples. A former educator, Dave is a director, consultant, and facilitator working in Perth to bridge the cultural space between Aboriginal and non-Aboriginal peoples.