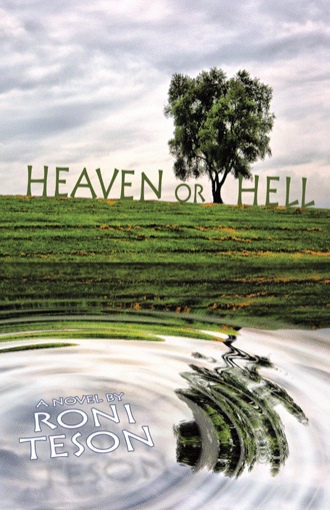 Following years of living in an alcoholic fog, Joe becomes an upstanding member of society—but only after he experiences a trip through Hell itself.
Teresa creates her own Hell in current day Los Angeles where she struggles with her past while trying to raise her teenage son.
Am I in Heaven or Hell, Angel wonders, as she floats restlessly from cloud to cloud, finding herself in constant pursuit of an earthly Teresa and not knowing why.
Heaven or Hell is a story of tragedy, loss, and a triumphant life-changing resurrection when the lives of Joe, Teresa, and Angel collide in this world and beyond.

“… A fascinating take on the afterlife we all will face.…”
—G. Miki Hayden, New York Times--lauded Edgar winner

“Excellent handling of a dysfunctional family actually coming full circle…”
—Victoria Christopher-Murray, author of Truth Be Told,
Sinners & Saints, and many other titles

“Roni Teson is a gifted storyteller who brings to life a hardened alcoholic with the same grace and honesty she applies in writing about an angel…”
—Karen Coccioli, Author of The Yellow Braid

“This was absolutely phenomenal! I cried and figured the end would be heartbreaking, but I ended up smiling as I read it…”
—Diana Cox, www.novelproofreading.com

You can visit Roni on the web at
www.roniteson.com

Roni Teson developed a passion to write that stemmed from her love of reading. She began the original version of Heaven or Hell and then shelved it a few years prior to its completion due to her career as an executive in the accounts receivable management industry. Divine intervention had a hand, however, when she was diagnosed with stage IV cancer and made the time, during her treatment, to complete the novel. Over the period of her amazing recovery, Roni found that her own journey somewhat paralleled aspects of the lives of her characters in Heaven or Hell. As she responded to the medication and was potentially overcoming cancer, she experienced loss on almost every level of her life. Today Roni is fully recovered, completely disease-free, and living a life transformed in Southern California. Roni Teson was educated at California State University, Long Beach.