Mr. Penny and the Dragon of Domeville

The Story of Us 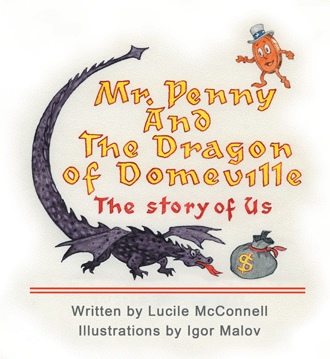 A fax cover sheet and then a memo appeared in Mr. Penny’s fax tray. Mr. Penny knew it was a mistake when the People’s House letterhead emerged from his fax machine. As he read the memo, he grew more concerned to learn of the greedy dragon devouring all the money of Us. Mr. Penny wondered how long Uncle Sam had kept his terrible secret and how long before Domeville ran out of cash to feed the beast, as farmers feed their cows hay. Mr. Penny decided to take the memo back to Uncle Sam in Domeville. He wanted to share his idea. He had learned from the fax that the dragon ate only bills and a few coins, but no pennies. In fact, the dragon had no taste at all for pennies…they were too small. So, the pennies of the Land of Us could stop the dragon and save Us!

The future of the Land of Us looks bleak indeed! The terrible Dragon of Domeville is burning through the money of Us, consuming bills, as well as the hopes of Us, at an alarming rate. There is only one hope, one way to stop him: Mr. Penny, the puniest citizen in all of Us.

Buy this book to give to your kids and grandkids and to give them a brighter future. Lucile McConnell, the author, will donate all after-tax royalties to retire America’s National Debt under Public Law 87-58. Learn more about voluntary contributions to retire the Debt or contact Lucile at www.mrpenny.net.

America’s New Day Begins with Us!
Welcome to the Future of Our Choice!

Lucile McConnell is a tax/commercial transactions attorney admitted to practice in Washington, DC and New York. She graduated Cum Laude from Cornell Law School in 1987 and with Honors in Economics from the University of Chicago in 1983. She founded the non-for profit organization The Fund to End the Deficit in 1993 and rallied citizens, under Public Law 87-58 (P.L. 87- 58), to make voluntary contributions to retire the National Debt through 1999. These voluntary citizen contributions, including contributions from such events as Rock the Debt, Wine Down the Debt and Dance the Debt Away, amounted to an all time high in voluntary citizen contributions to Debt retirement during the 90’s and played a part in generating the budget surplus that was recorded in 1999. She created an active civics project for students nationwide in grade schools through high schools: “The Penny Parade”, worked with College Student Governments across the Country to hold Rock the Debt concerts and collect pennies for debt retirement. Ms. McConnell has been featured in news stories coast to coast, including appearing twice in The Washington Post, in USA Today Sunday Magazine and on Good Morning, America! All proceeds from Mr. Penny and the Dragon of Domeville: The Story of Us will be contributed by Ms. McConnell to retire the principal of the National Debt under P.L. 87-58. Ms. McConnell lives in Baltimore County, Maryland with her son, Caleb, and her 2 cats, Tiger and Finney. To contact Lucile or learn more about P.L. 87-58, go to www.mrpenny.net.