All Goes on Twenty 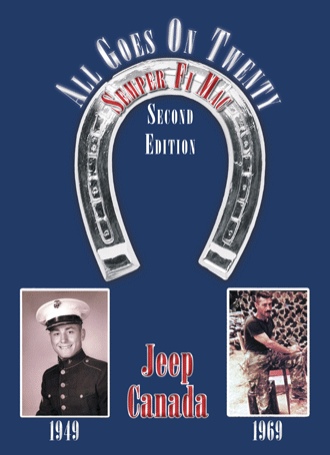 Farewell to An Hoa Squad

From his book, We Few – We Chosin Few

“Just before I went to the rear, we had a memorial service for all the Marines that were killed in An Hoa. We placed sandbags in a row and stuck the rifle of each dead Marine, with his helmet on top, into each sandbag. I wrote the following poem for these dead Marines.”

Gone forever the An Hoa squad, what price glory

Known but to God,

Each paid in full, farewell to arms, safe passage

Young warriors, away from harm;

Long be green meadows, white be your cross,

Gallantly fought your battles, sadly be your loss,

Taps played in honor, helmets placed side by side

Those ten thus departed, this An Hoa Squad

Replaced by other where they once trod;

Instilled with your memories, in a column of three,

Marched off together to pay their own fees;

Gone forever when more battles are won, what

Price glory, among you my sons,

Each pays to order for the bearing of arms,

Uptight tomorrow, in the way of harm.

From the orphanage to the Marine Corps there are over 40 pictures. They tell the story of war and the people who fought in them. The Chosin Reservoir is one of the greatest battles in American History. The Star of Koto Ri was as important to the First Marine Division as the Star of Bethlehem was to the three Wise Men. From Korea to Vietnam there are men killed on the battle field. Their loved ones still want to know anything that I can tell them about their story.

The author has written two books. The last one, We Few, We Chosin Few was given a five-star rating on Amazon.com, and the State of California has awarded a certification of literary excellence. The author spent twenty years in the Marine Corps. All Goes on Twenty is about the two wars the author fought in and was wounded three times.