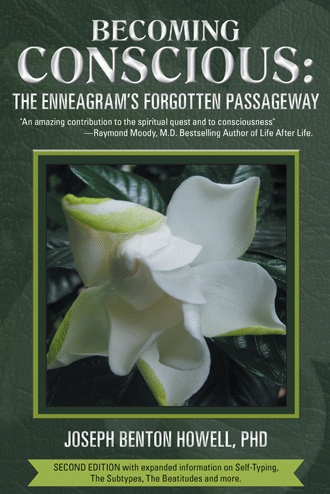 The Enneagram
Of Personality –
A Passageway to Consciousness

A passageway to becoming conscious is nearer than we can imagine. We can follow this passageway, only by knowing the deeper aspects of ourselves as revealed by powerful spiritual truths. A profound reflection of these truths, the Enneagram reveals to us our true self which miraculously opens the passageway to the land of conscious being.
In opening the gate of this transformational passageway we become familiar with our personality type as depicted on the Enneagram. By seeing far more deeply into our own being, we discover on the Enneagram of Personality the particular obstacles that block our type’s ability to become conscious. These obstacles can be removed only through faith and spiritual transformation. Like lightning and thunder awakening us to a greater alertness, the Enneagram’s wisdom sheds light upon what a dark night would have hidden. Revealed in a flash are our personality, its inherent imprisonments, and amazingly we also see our pathways to freedom! Let us now discuss this phenomenal process.
In our new awakening, we discover that our personality includes “traps” of compulsive thoughts and behaviors, which repeatedly delude us into making the same mistakes which bring on much suffering. This unconscious repetition of the same thoughts and actions once seemed to bring hope of satisfaction. Now, however, it is evident to the greatly suffering person, that these patterns bring overwhelming pain instead of fulfillment. John Sanford spoke to this when he said “…the outer shells of the personalities of many people conceal a hollowness, an emptiness longing to be filled, with an accompanying agony of the soul”. 1 The personality driven by the ego cannot be healed by ego alone. The Enneagram points out that we have identified with the ego which has fixated upon certain behaviors and thoughts that dominate and trap the person in unconsciousness. To turn and enter consciousness, the ego fixation must be replaced by something more powerful.
The Enneagram’s wisdom blows away the shrouding smoke of unconsciousness by revealing the startling truth that our personality is not really our truest self! Personality is but a mask, a “social vehicle” in which we move among other masked personages. It and its ego can even mask one’s true nature from oneself. Just imagine, the suffering we have born simply because we have lived as a personality that is not who we actually are! When this false self is unmasked, we are free to reclaim something that is holy, beautiful, and powerful: our deepest nature, called our soul’s essence. Living out of this real self, the suffering caused by unconscious living vanishes. Ego suffering is irrelevant now, because the world is seen through new eyes and heard with new ears of consciousness. Jesus spoke to the eyes and ears of spirit as they are used in perceiving reality. “He that hath ears to hear, let him hear (Mark 4:9) 2 and “the eye is the lamp of the body. So if your eye is healthy, your whole body will be full of light. (Matthew 6:22) 3. These new senses of consciousness enable the person to perceive life not as a self among a conglomeration of separate selves, but as a living pulsating part of a greater unity of humans who all have this true deeper nature. Seeing oneself as one’s true nature (or essence), not as a personality of ego, completely reframes the reason for living and puts suffering in a new light.
When living unconsciously, life was seen primarily through the lens of ego. This lens viewed the world as a subsidiary of self. People were seen as extensions of self or as oppositions to self. Examples of the unconscious self include viewing oneself as a role, status, perceived material worth, external appearance, and as a self-composed story. In short, when living unconsciously, the self is seen as separate from the whole, and as the product of its’ own story. This perception of life ultimately led to great suffering in that the self, the extensions of self and the story of self, could never really heal loss, illusion, and suffering.

From Self to Consciousness

Knowing one’s personality type can light the way out of this needless suffering. How is this possible? By way of answering this question, let us presume that the false personality is like a piece of masking tape. This sticky tape covers a luminous crystal which symbolizes consciousness. If one can unmask the crystal by removing the tape, the brilliant clarity of consciousness will shine.
We can begin the unmasking process by peeling back one small corner of the tape. In scraping our fingernail across an edge of the tape, a tiny corner is loosened and is now free; we can feel it between our fingers. Pulling this tab of tape away from the crystal begins the removal of the rest of the tape in its entirety. One corner of the tape was the starting point for a total unmasking. This corner of the tape represents the discovery of our personality type and the type’s ego fixation. Lifting away the first block to consciousness is the beginning of becoming conscious. It is the beginning of letting the light in and out.
There is a seamless yet fine line of spiritual reasoning that as a chain, leads us through the passageway to consciousness This chain of reasoning takes us to consciousness, link by link. Helping us make a giant leap, the chain’s first link is to know ourselves. Our having been “fascinated” by learning our personality type led us in the end, to our true identity with cosmic implications. In exploring personality, one would predict that more descriptions, nuances, and characteristics would be added to self, but instead, we were led to shed this self. We discovered that the personality of self is really not the real us at all. We found that there is a truer self far more essential and deep than our superficial personality and its ego. It was the removal of, not the adding to, the false self that exposed the true self. In living in our true nature we became aware of and connected to all life. We saw the limited centricity, short-sightedness, and futility of being driven by the ego, and identification with it. “Self” was redefined in a new and inestimable way. Living out of this “new self” carries vast implications for all life. It means being conscious. Consciousness can bring life to its fullness. Without consciousness life on this planet will end.

Did you know that you are not your personality? Beneath your outer layers of self is an authentic, beautiful being exactly as it came from heaven. Discover this wonderful, real you and draw from its miraculous power in Becoming Conscious. Learn from clinical psychologist and spiritual teacher Dr. Joseph Howell how to:

Find the root causes of your suffering and unhappiness.
Free yourself of the traps that seduce your ego.
Be renewed with a sense of inner knowing, childlike joy, and wonder.
Stop being driven by what others expect of you.
Increase your tolerance and understanding of friends, spouse, children, and co-workers.
Relate to others on deep, meaningful levels.
Grow in consciousness of your specific divine purpose and your connection to the planet.
Understand your repeated, self-defeating patterns and learn clear ways to stop them.
Become consciously present.

Reach your full potential as Dr. Howell explains the powerful and deeply spiritual Enneagram and relates it to your life. Whatever your beliefs may be, Becoming Conscious is a life-changing journey.

Educated at Yale Divinity School, the University of Virginia, and Harvard University, Joseph Howell, PhD has practiced clinical psychology since 1981. An expert on spirituality, psychological change, and the Enneagram, he is in demand as a speaker and teacher around the country. He and his wife, Lark, reside in Anniston, Alabama.