The Art of Illumination 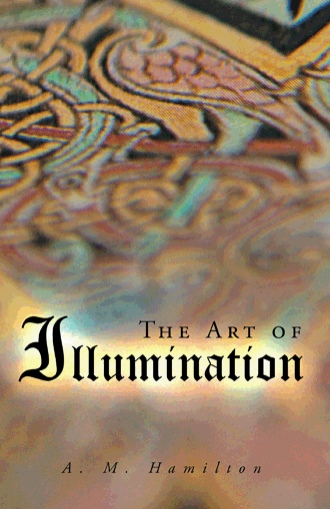 The Art of Illumination

The lines on the vellum came easily, just as they usually did, just as it had on the practice parchment. It would be good work, and I knew it. There had been many carpet pages and dozens of title pages that had passed under my pen those past few years, but this one would have to have been among the best that I had done. It was also the most sacred. The draft design on parchment looked wonderful, and it would work; I could feel it.

As I began to put the design onto vellum, every little bit of pigment exploded with unimaginable potential. Every stroke came blessed with the breath of God, and every breath I took flowed through my pen and out onto the freshly pounced calfskin. Three weeks earlier, it had been a blank piece of calfskin velum that had been expertly prepared by our very own brothers just a few meters away in the scriptorium. It sat there on my desk and looked at me with all the anticipation of a virgin waiting for her first kiss. What magnificence will that blank piece eventually reveal? I thought to myself. What mysteries will it hide? The design would become home to the words Cessio Illimitata, the seventh secret, Unconditional Surrender. What illumination will come from it, and to what soul? I ached inside with each stroke, every mark sacred and perfect, just as I had seen in other works.

I hadn’t noticed it at the time, but I had managed to work the large letter C into the design to make it look a little larger than life. It was traditional Celtic in design, complete with Celtic knots and ornate animals playing within it. I played with it a little, adding darker areas and then contrasting them with lighter ones. The large letter C, which had taken up most of the page, leaped out of the vellum toward me, leaving the remainder of my complex Celtic design to fall back flat onto the velum behind it. It had a surreal look to it that was different from anything I had ever seen. I don’t quite know how I had done it, but I had managed to introduce light into the design, giving the letter C substance, making it tactile, but in order for light to be introduced, shadow had to be introduced as well. When I realized what I had done, I heard myself gasp in excitement. I knew it was incredible. I had hoped that the others would find it equally incredible. I heard myself give another muffled gasp as I looked at it from a slight distance. I guess it was loud enough to disturb Ailred, who was right around the corner talking to Steven, as I heard him shift in his seat.

I had shut myself off to the fact that Brother Ailred had been there with Steven for the best part of an hour that morning. He had become a regular visitor to Steven since he was enclosed just a few weeks earlier. I guess he was seeking reconciliation. I didn’t know, and I never asked; it was not my business why brothers sought the counsel of Steven. I too sought Steven’s counsel. To me, he was the Unknown Saint, for surely his saintliness would be kept from the world. It was a decision that both he and the prior made, and I could tell that it weighed heavily on the prior. I sensed it weighed heavily on Steven too but not for the same reasons. Late at night when all was dimly quiet in the abbey. I would be lying on my bunk listening to Steven quietly sob into his prayers. I sensed that the loneliness was plucking away at his soul. I felt sad knowing that history would never know of this man. I knew it was the ultimate act of humility and that could only be difficult. He also knew that God had his own agenda and that he couldn’t interfere with that. I couldn’t be sure what demons he was at war with; all I knew was that he was indeed at war “Don’t ask God to explain the things that mystify you,” said Steven one day when I sought his counsel. He paused a moment and then added, “If you do that, then it takes away all the fun of uncovering them for yourself.” I smiled when he said it. Sadly, I knew that he wouldn’t be able to see me smile. He was right though. I was aware that I spent a lot of time wanting God to explain my shadows to me and to take away my illusions and fears. But as always, God remained silent on such things. I knew God would; I just wished he wouldn’t. It was sometimes hard to trust that God might know what he was doing in my life.

“Am I asking the wrong questions?” I asked Steven.

“Perhaps you are. Don’t ask him to clarify these things or to take other things away. Clarity does not present itself in that way,” replied Steven softly behind his screen.

“Then how does it become clear?” I asked, knowing the answer. I felt I needed a little reassurance.

“You know the answer better than most. When you ask questions like that one, it is because you have forgotten to allow God the freedom to work within you. Don’t ask God to take away the pain and make it easy for you. Rather, ask him to put you where he wants you to be and then tell him you will be delighted to see him there helping you within that. When you see the shadows, you know are there within you. Allow them to be there so that the possibility of light can come through. We still tend to think that God should think like we do, and this causes frustration. We tend to not want to look at the deeper, bigger picture, and it is our illusions of what we perceive to be real and what we expect to be the result that will stop us from opening up fully to the reality that is. The shadows and mysteries are required, just as are the moments of light so that the full reality of the picture can be experienced, so that it can be fully felt and understood.”

I understood this meaning when I took another look at the title page I had just created. Everything that Steven had said was brilliantly indicated in the design before me. There were shadows where I never expected I would find them, and there was light brilliantly placed to contrast the shadows. Together, the light and shadow worked to enhance the image. What had I tapped into that made it make so much sense? I knew I had stumbled upon something brilliant, like a light had just exploded within me. The experience was so overwhelming that I heard myself expel another gasp.

“The Art Of Illumination is a spellbinding book that transports one into a world of wonder, mystery, and divine empowerment. It weaves a tale of long lost wisdom and sprinkles it at the feet of the reader like gorgeous pearls. I cannot recommend it highly enough. A fantastic read.”

— Sonia Choquette, NYTimes best-selling author of The Answer Is Simple. Love Yourself. live Your Spirit

“The Art of Illumination is the stunning tale of one man’s journey into the deepest realm of the soul. A compelling mystery propels this luminous exploration of the human experience of the divine. A wise and beautiful book, it grabbed my heart from the first chapter and never let go. It’s a remarkable story, written with startling vision and grace by a promising new author. It will leave you awed, moved and hungering for more.”

— Maureen Boyd Biro, author of “Walking With Maga” and “Voices of the Valley, First Press”.

“This book is amazing - I picked it up just to check a few lines and couldn’t stop reading. I felt as though it was educating me, and I could imagine everything as if I was watching a movie. There wasn’t one part of the book which did not make me want to quickly turn to another page.”

The year is 1097. Britain has been politically unstable for an age, and it doesn’t seem as though things will be settling down any time soon. It isn’t just political issues that threaten the population, however. Without an understanding of the nature of pestilence or the knowledge of how to treat it, disease runs rampant through the population, affecting everyone in its path.

While tragedy rampages unchallenged, one place stands apart from the events afflicting the world at large. Hidden away in a corner of the land stands the large, stone monastery that serves as a shelter from the terrifying world. It is here that one man finds himself on a journey he never expected he would take. He discovers the art of illumination, not only in the creation of beautiful manuscripts, but in illumination of the soul. In the process, he also uncovers a secret that will propel him into a world he never expected to find.

A. M. HAMILTON is a registered aged care nurse. She lives with her husband, son, and their dog in a quiet country town on a beautiful bush property in New South Wales, Australia.