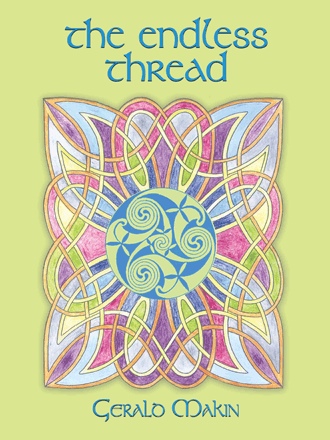 The Endless Thread is a clearly written account of the discovery of a very ancient and hitherto secret Celtic oral tradition, dating back to a time long before the Celts became known to history. This tradition is a cornucopia of knowledge and beliefs, which are relevant to the present time and demand a total re-evaluation of our most cherished beliefs.

This knowledge was held is secret, because in historical times, it could not have been understood. Church and state would have sought to extinguish it, seeing it as a threat to their power. Western culture has now reached a stage at which what has been so carefully preserved can be considered by minds not burdened by dogma, religious or scientific.

Important aspects of the ancient knowledge are encoded in the Book of Kells, now in the keeping of Trinity College, Dublin. A detailed explanation is given here. Other sources are described and illustrated.

The author has made a major discovery, hidden for millennia in the prehistoric Glastonbury Zodiac. This too is illustrated. Other discoveries are also described.

What was the deluge, remembered in the lore of many peoples throughout the world? An explanation is suggested here.

Although the existence of Atlantis is usually denied as a geological impossibility, the Celtic tradition sidesteps this view with a radical alternative, also accounting for the fabled continent of Mu.

Personal experiences of the author and others are interwoven with the main theme of this book, some surprising, some harrowing, and some humorous.

The Endless Thread commends itself to those seeking answers, but not to the gullible or to sensation-seekers.

Gerald Makin is a retired teacher and lecturer and a practicing artist. He was born in England, coming to Tasmania in 1972. Makin is married with two grown children.

In addition to research, art, and writing, his main interests are reading, travel, and classical music.