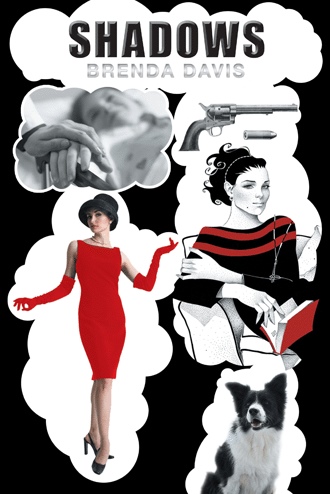 Shadows are created when the light is blocked by an obstacle, producing areas of darkness. Shadows can represent dark places where people hide things they do not want to take responsibility for. Things such as: child abuse, spousal abuse, alcohol abuse, substance abuse, mental illness. Every family has secrets but some have dark, dangerous secrets that physically or mentally cripple those around them. The only way to address these things is by bringing them into the light. Individuals also create shadows in their mind in order to hide painful memories of unacceptable behavior or trauma that they have suffered. These memories can reappear at any time, and the pain can be devastating again.

This story spans three generations of women—mother, daughter, and granddaughter. They all three had black hair, emerald green eyes and shared a predisposition for mental illness, which are all hereditary traits. The era that each lived had a significant impact on the problems that they had passed to each other. Mental illness in the 1930s was lumped into one category. Bess, born in this time, was hidden away to conceal her mental illness that was spiraling downward into complete insanity. Jane, Bess’s daughter, was born late in Bess’s life. Jane’s mental illness began to surface as a teenager and brought destructive behavior that affected many people adversely and forever changed their future.

Jane’s daughter, Lily, was raised in the shadow of alcohol addiction, child abuse, her mother’s partner abuse, and murder. Lily had to pull herself out of dire circumstances while she dealt with the possibility that she might have a form of mental illness. Lily was blessed with an angel in the form of a lonely widow who gave her the tools she needed to lead a normal life. She also experienced the unconditional love and devotion that came from a dog that wandered into her life.

Brenda Davis lives with her husband of 24 years, Clifton (Hugh) in Cordova, TN. They live with their five dogs; two Doberman Pinchers, one shitzu and two poodle mixes. Brenda graduated from Oklahoma State University in 1975 with a Veterinary Medicine Degree. She practiced veterinary medicine in a mixed animal practice which she owned and operated for twenty five years in Hope, Arkansas. After selling the veterinary practice in 1997, Brenda was an Associate Veterinarian with Dr. Ricky Hughes in Malvern, Arkansas for 3 years. Brenda joined the USDA Food Safety and Inspection Service as a Supervisory Public Health Veterinarian in 2000. She retired in 2012 at the age of 62. Brenda’s husband, Hugh, also retired from USDA FSIS as a Consumer Safety Officer. Hugh is a Viet Nam veteran having served in the Navy assigned to the marines as a corpsman. He received two purple hearts for being wounded during the war. Brenda and Hugh have a blended family with six children; four boys and two girls. They have, as of now, 16 grandchildren. Brenda and Hugh love to go camping and trout fishing on the White River at Bull Shoals, Arkansas. They travel a lot to visit their extended family and have the grandkids spent time with them in the summer. Brenda has to limit her activities due to having fibromyalgia, arthritis and back joint compression but is enjoying retirement with her husband. This is the first fiction novel that Brenda has written. If you would like to contact Brenda with questions her email is brendadvm@yahoo.com