A Rhapsody of the Soul 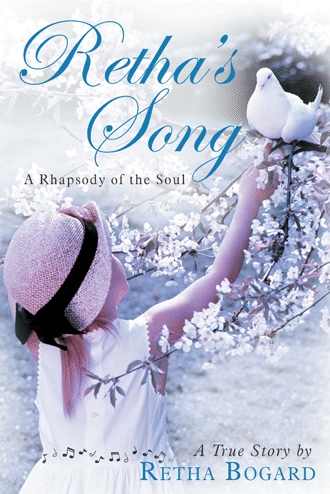 “God, I’m exhausted. It is 4:45 AM and I really need to go to bed. Thanks so much for talking and always being the best Papa ever. I love you God and am so grateful for everything you have done for me in my life. Even the most difficult situations, looking back, had such great purpose and drew me closer to you – your divine wisdom and your immeasurable, unlimited love that I have a hard time wrapping my head around all of it. Thank you God doesn’t even seem appropriate. Always, always, always guide me with your gentle touch.

Goodnight God, the Sunlight of my Soul

“Retha, yes, you now know where you came from. The place where all my children come from, the place all angels are born. You have pushed it for many years and yes, you do need your rest. Jesus never doubted you, nor did I. You now know your purpose. A whole new world awaits you. And always remember, Love is my Word, Love is my Law. Goodnight my Love,

Your Papa, God of Light

In Retha’s Song: A Rhapsody of the Soul, Retha hears her “God,” the sun, speak to her for the first time at the age of seven. He speaks of a baby boy being born who lived far away from her and is her beloved. As long as she listens to God’s voice and stays on her path and the young boy stays on his path, with God’s guidance, they will meet.

She strays many times from the voice of God and her path. During the journey, she is struck with a devastating Bipolar Disorder, and her young son is diagnosed with Crohn’s disease, which nearly took his life. Her faith began taking new direction, and she began experiencing phenomenal supernatural events in her life. Her intuition became increasingly powerful; however, internal, mind-altering suffering kept plaguing her.

Music, directed by the angels, was the compelling force that was the interwoven thread that could bring these two souls together, as they are both singers and songwriters. Could a miracle happen?

Retha Bogard has studied extensively in the areas of the healing arts and major religions and now consults many people with various diseases and disorders, helping them overcome their challenges.

Her intense love of music was used by writing and composing music during her own healing process from Bipolar Disorder. She currently resides in Highland Park, Illinois, and her son lives ten miles away in Skokie. She has released a CD of relaxation and healing music entitled Come to Me Spirit.