Awakening of the Universal Truth through Poetry 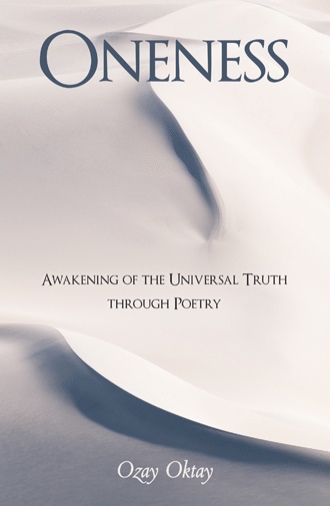 Dear Reader, In this Universe all seem to be random but nothing really is. The fact that you are now reading this book is no “coincidence” but an indication that you are ready for the message enclosed. The purpose here is to help you realize that there is another aspect of you hidden behind the clouds of your mind. It is the real YOU. A limitless, changeless, nameless, formless, deathless and complete YOU that nobody can describe or understand. An Eternal YOU that pervades everybody and everything, allowing them to exist. The purpose of this book is, while you are reading it, to scatter the clouds so that YOU can shine through and BE YOURSELF. So that you remember your TRUE IDENTITY. So that YOU can flow through and YOUR ONENESS is witnessed. Although grammatically incorrect, capitalized words throughout the book are used when referring to YOU: The divine ONENESS that YOU ARE. Language falls way too short when it comes to describing what THAT IS The book has no chapters, no beginning and no end. One can start reading from any page. It can be helpful for readers to observe a period of mental silence after reading each poem. The awakening to the Universal Truth can only happen in that silence. LOVE… AWAKENING The cocoon is the silk worm’s world. A world in which to die. Unless one day it gives it up And just breaks out to fly. The human is in the same boat. He too is cocooned. Woven by his little mind That puts him out of tune. Need to be in tune with ONENESS. So freedom can take hold. Need to let The LOVE to flow In order to break the mold. About “AWAKENING” Sleep walking bodies live in a world of dreams made up by their own minds. In that world there is birth, there is time and there is death. It is a world of suffering no matter how enticing the dream seems to be. The only way out is to wake up. Gently walk through the suffering like walking through a garden of roses. Ignore the thorn pricks and use them to keep yourself sober. There is FREEDOM and JOY at the other end of this garden.

At every stage of human history, there have been a few human beings lucky enough to stumble into the Universal Truth and live it—prophets, saints, Zen masters, Sufi masters, and a few of their disciples. They all kept it secret among themselves, for the rest of the people were not yet ready to hear about it.

Now it seems like there is a much wider spiritual awakening around the world. This is good news. However, this threatens the human ego that needs to keep individual selves separated from each other, from everything else, and from their One Source for its survival. So humanity, under the leadership of the ego, takes a more unconscious posture, evidenced by the rising fear of everything and everybody. Hence the wars, natural and manmade disasters, myriad illnesses and death to fear and protect from. All this generates shared human suffering, which serves as a catalyst to accelerate the awakening.

The coming of this book is no more than another evidence of the Universal Awakening. Every poem in this book, as well as every conversation point to one thing and one thing only: the ONENESS of everybody and everything, may they already be manifested in the universe or not.

The universe is an expanding ball,

An infinite sphere, they say.

Can’t tell where the center is, though,

Or it expands where.

If this ball is infinite,

Does it make sense, then, to say

That the center is right here

And the ball expands nowhere?

“The uni-verse means the one-word,”

Says the man himself.

Could it be, then, that the One Center

Ozay was born in Turkey, where he lived until his graduation with a BS degree in electrical engineering. He then moved to the United States to study for a master’s degree in 1980. He has been living and working in Southern California since.

In his early twenties, Ozay met a true spiritual teacher, who introduced him to the Universal Truth of Oneness. As a manifestation of his intense spiritual deepening, a stream of about fifty poems emerged through him during the last two years. This presented an opportunity to reach out to as many people as possible.

Ozay is not aligned with any religion, nor does he adhere to any doctrine or dogma.