The Power, the Miracle and the Dream

A Beginner’s Guide to Lasting Happiness 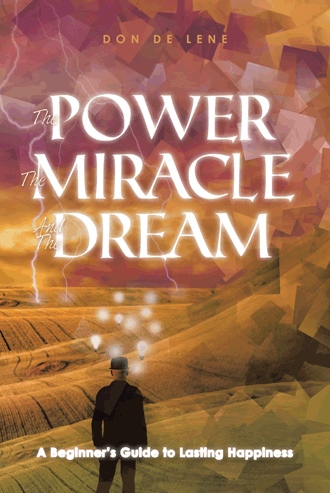 Hannah was seven years old when she moved from the city of Melbourne, down south in Australia, to a small country town nearly 3,000 kilometers way up north in central Queensland. She was a very pretty girl of about average height, with short, light brown hair and lovely, deep blue eyes.

Her mother and her brother, Harvey, who was three years older, went with her. However, she left her father behind. Her mother and father had separated when Hannah was just a toddler. She could barely remember her father living at home with her and the rest of the family. Even so, she was very fond of him and, before they shifted to Queensland, she’d see him every second weekend. Also, he’d phone her and Harvey at least once a week.

Somehow, she and her father always had something interesting to talk about. He seemed to understand and believe in her. This made her feel good. Hannah was sad to leave him behind. She was going to miss him. She knew he was sad that she and Harvey were going away. On the day he said goodbye she noticed the tears glistening in his eyes. However, she thought he was brave too, because after giving them a farewell hug, he said, “Remember guys, whatever happens in your life, happens for the best. Don’t resist life’s experiences. Embrace them with the willingness to learn from them.”

Although Hannah didn’t quite understand what he meant, somehow she never forgot those words.

Ever since she could remember, Hannah was aware of the fairies that lived among the bushes and shrubs in the back garden of her home. It was a bit puzzling that no one else seemed to notice them. However, she didn’t worry too much about that, because whenever she played in the garden on her own the fairies would appear and she was never lonely.

They were friendly, but shy. She used to try to talk to them, but they didn’t talk back. Sometimes though, she thought she heard them laugh and giggle as they flitted among the plants and flowers.

Hannah already knew a great deal about fairies. She had lots of fairy dolls as well as lots of books about them. And there was one thing she remembered about her father living at home - he used to read some of those books to her.

One day after school, months before she moved interstate, she was playing by herself in the garden when out of the shrubs popped a beautiful little fairy.

“Hello Hannah, how was school today?” she asked. She had stunning auburn-colored hair, a brilliant white dress, matching white stockings, sparkling white soft shoes and transparent silky-white wings. She was no bigger than Hannah’s hand and in her hair was a tiny garland of white roses. Hannah had never before seen anything so lovely.

“Well, of course I talked. How else are we going to communicate - by sign language?” the fairy replied, her dazzling eyes twinkling brightly in the sunlight.

Hannah had to consider this for a moment. “But the other fairies never talk to me. How come you do?”

Using the leaves of a birch tree like a trampoline, the fairy bounced closer to Hannah before stopping on the nearest leaf and said, “Because they’re shy and I’m not!” And that seemed to be the end of that topic of conversation, because she again asked, “How was school today?”

“I like my friends and my teacher, but I’m not very good at school work. Most of the class does better than me,” Hannah replied glumly.

Then to change the subject before the fairy could say anymore, she asked, “Where’s your magic wand?”

“I don’t have one,” replied the fairy with a flashing smile.

“How come? All fairies are supposed to have a magic wand.”

“Who says?” said the fairy, crossing her arms.

“Well, all the fairies in my fairy books do.”

“For every rule, there’s always an exception. And I must be an exception, because I don’t need a magic wand,” said the fairy, hovering centimeters from Hannah’s nose.

“So how do you do magic tricks?” Hannah asked, taking a small step back to escape the ticklishness of the breeze from the fairy’s wings.

“You don’t need a wand to do magic tricks. We all have the power in our own minds,” the fairy replied, settling on Hannah’s head.

“What do you mean - all? Do you mean me as well?” said Hannah with a frown on her face, her eyes straining upwards trying to see the fairy in her hair.

“Of course. All humans, without exception, including you, have the power within their minds to do just about anything they set their hearts on doing.”

Hannah put her hand out in front of her and the fairy gently alighted on her palm, sat down and dangled her legs over the side.

“I didn’t know that,” said Hannah, surprised how little the fairy weighed and how tingly she felt on her hand.

“Most humans don’t. It’s as if they all suffer from amnesia.”

“No, amnesia. Amnesia is when you lose your memory. Just about all human beings have forgotten about this great power they have within their minds. Or for some reason they don’t believe in it, or maybe they’re too afraid to use it. Anyway, most humans seem to spend all of their lives full of self-doubt and being afraid. If they opened up their minds to the power within, they would never be doubting or afraid again. They’d always be happy.”

“Only if you really want it,” said the fairy, standing up and stretching her arms above her head, flapping her tiny wings as if to shake the dust off. “But understand that what I teach you, other people aren’t likely to agree with. You might find yourself looking at things differently to others. Maybe they’ll even make fun of you and tell you you’re crazy.”

“Well, they’re the ones who must be crazy, if they don’t use their power. As for me, I don’t want to be afraid. I want to be happy. So, they can laugh as much as they like, I don’t mind. When will we start?”

“Tomorrow if you like,” said the fairy, once again hovering in front of Hannah’s face, “and asthma will be our first subject.”

“Asthma?” cried Hannah, screwing up her nose because the wind from the fairy’s wings was tickling it again. “What’s that got to do with anything?”

“Everything!” shouted the fairy, as she disappeared into the thick bushes near the high wooden fence.

Hannah ran inside excitedly. Her mother was in the kitchen talking on the phone. Harvey was sitting at the kitchen bench having a snack. He was about ten centimeters taller than Hannah, a good- looking boy with a mop of blonde hair.

“Mum! Guess what! Guess what! I’ve found a fairy that talks!” she blurted out before she realized her mother was busy. She noticed Harvey roll his eyes momentarily, before taking another bite of his peanut butter sandwich.

“Shh!” said her mother, covering the mouthpiece. “Can’t you see I’m on the phone?” Then, talking back into the phone she said, “Sorry about that.

“That was Hannah, she’s found a talking fairy in the garden this time. What an imagination!” Then pausing a moment to listen, she replied, “No, not Harvey, after all he’s nearly eleven now. He got that out of his system years ago. Around about the time he became interested in computer games.”

Hannah could see her mother was going to be on the phone for a while. She looked at Harvey and was about to tell him about her encounter with the fairy, when he poked his tongue out and made a funny face.

The Power, the Miracle & the Dream
is a trilogy revolving around Hannah and her older brother, Harvey who embark, individually, on a voyage of self-discovery. A journey that holds out the promise of transforming their lives for the better. One that offers them purpose and direction in life and ultimately lasting happiness. That’s if they are open and receptive to adopt and embrace radically different ways of thinking.

But are they willing to swim against the tide of accepted norms and behaviors? Are they ready to make the right choices, face their fears and resist the many temptations to compromise?

These are entertaining stories with profound messages that anyone of any age, with an open mind can find inspiration from.

It’s never too late to change our minds, make different choices and rid ourselves of our baggage of guilt, fear and self-doubts. All it takes is a little willingness to believe there is a better way of living our lives and we can become the persons we aspire to be.

Chock-full with metaphysical truths and ‘how tos’ as well as engaging and inspiring stories, The Power, the Miracle & the Dream will provide seekers of the truth with a roadmap for their voyage of self-discovery.

Don De Lene has been a seeker of truth for most of his life. For the first 48 years searching externally, without success. For the past 20 years looking within, with increasing success. His stories reflect the answers he’s found, to assist fellow seekers of truth to find theirs.