Surfing the Paradoxes of Everyday Transformation

Flourishing in the Context of an Emerging Normal 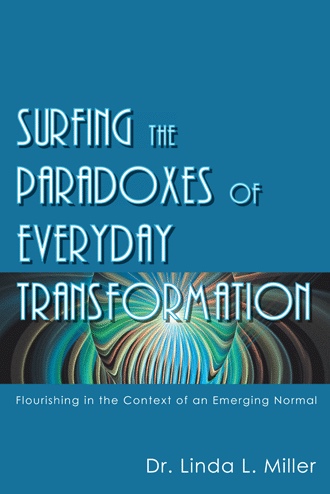 As the last rays of the industrial age finally give way to the full force of the information age, a giant leap in the complexity and pace of daily life takes place despite the change-fatigue that has taken up residence in our corporations, businesses and homes. Tolerance levels are shifting to disallow energy-sapping step-by-step processes, moving toward accelerated growth through iteration and innovation. The result is that the change-plateau-change pattern of the past has morphed into unceasing transformation.

Social networking, reality media, and the masses of information at our fingertips offer a corresponding toolbox for all to use in rising to the challenge – but there’s a catch. For not only do we need to stretch even farther to learn the mechanics of these tools, they are so powerful that intense focus is required to apply them dynamically enough to reap their benefit.

This book offers professionals, business leaders, artists, entrepreneurs, parents, and students the mental shifts and soft skills required to make the leap to everyday transformation. It describes how best to approach and wield the new technology toolset and ultimately lights a path to flourishing in the new era of everything, all the time.

Dr. Linda L. Miller has made lifelong careers of the application of information technology to transforming business and the study and practice of metaphysics. She is uniquely qualified to comment on the intersection of technology, media and new thought, as they relate to the human experience, approaching a new era of self-awareness and constant transformative change.