SECRETS of a UNIQUE & SEXY SPEAKER 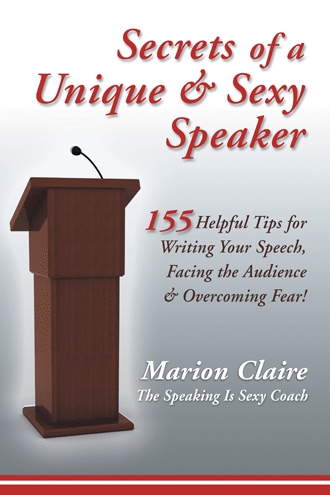 BIG OR SMALL, TALK TO THEM ALL
Julianne was recently promoted to vice president at a growing accounting firm with offices in three cities. She was thrilled with her new opportunities and responsibilities, except for one. She was now expected to speak at the quarterly meetings of all three offices, an audience of approximately two hundred people.
"I'm okay when I speak to small groups," she said to me, "but when I have to face more than 10 or 15 people, I absolutely freeze up. I just can't stand that many eyes on me all at once."
"What is so uncomfortable about more than 10-15 pairs of eyes?" I asked.
"I don't know. In a small group, I can see all their faces and speak directly to them. In big groups, I feel overwhelmed trying to see who I'm talking to. Then I worry that I'm boring them or they're not getting my message, so I get self-conscious and start tripping over my tongue, my heart starts pounding and worst of all, I begin to blush! It's just a disaster!"
Julianne is a perfect candidate for the "Big Or Small, Talk To Them All" technique.
Whether you're behind a lectern or a podium, or with nothing but air between you and them, when you step up to speak, first take a moment to 'case the joint.' Look at all the faces in front of you, from left to right or right to left, doesn't matter. Don't say a word yet. Position yourself in front of them, take a few deep breaths, and at the same time, look for three special faces in your audience... one on the left, one in the center and one on the right. What makes them special? They're smiling at you, they look friendly, they look interested, it's someone you already know, or something else about them attracts you. Remember who they are.
When you begin to talk, look at your chosen person in the center for a few moments; then as you continue to speak, gradually turn to your chosen one on the right. Move slowly and deliberately to focus on the friendly face on the right. After speaking to her a couple of moments, turn back and focus on your center person again, and then turn gradually toward the left to look at your chosen person over there. After you've spent a little time with him, turn back, slowly and deliberately, toward the center and repeat the process, right, center, left, center, right.
Note that no matter how many are in the audience, you're only speaking directly to three people. But as you deliberately turn from left to center to right, the rest of the audience will be in direct eye contact with you. They'll all be in your line of vision as you move from left to right and back. They'll hear every word you say, see the enthusiasm and animation in your face, and appreciate your cool, professional manner.
That's all there is to it. Talk to your three chosen listeners. The rest of your audience will think you're speaking directly to them. Big or small, you'll be talking to them all.

SPEAKING TIP #12: Size doesn’t matter. Whether you’re speaking to a handful of listeners arounda conference table or in an auditorium seating several hundred, no matter the size of your audience, you never have to speak to more than three people if you don’t want to. The key is which ones you choose and where they’re located.

SPEAKING TIP #14: Speak to your three chosen listeners. As you speak, move your eyes from one to the other, left, center, right. The entire audience will be in your line of sight and will think you’re talking to them, too. You’ll feel comfortable that you’re only talking to those three chosen people, yet your message is reaching the rest of your audience at the same time.

SPEAKING TIP #15: Be the center of their attention. You’re in charge. Whether it’s 10 listeners or less or a group of 100 or more, there’s really no difference. The more the merrier. They came to hear you because you have information they need. They’re on your side. It makes no difference how many are listening. You’re still the expert. You’re still in charge.

SPEAKING TIP #16: The more eyes on you the better! Having a large number of eyes focused on you is a good sign. It means your audience is interested in what you’re saying. They’re following along, taking you seriously, and you’re giving your gift, getting your message across. Rather than feeling intimidated or anxious about being the center of their attention, be happy about it. It’s a sign of their admiration. While you’re speaking, you’re their hero!

What’s the best way to calm the butterflies before you speak?
Should you open your speech with a joke or a story?
What should you do if you forget something important?
How do you overcome your fear of speaking to large and small groups?
Here, in an easy to access format, you’ll find techniques to create and deliver a speech for every occasion, overcome pre-speech nerves, avoid tripping over your tongue, and always look and feel like a Unique and Sexy Speaker.
You speak in public every day. Whether you’re giving a speech, having a conversation, saying your wedding vows, teaching your kids, exhorting your sales team, or talking in your sleep, if someone is listening, you have the opportunity to influence and to inspire.
Being influential and inspirational! That’s very sexy!

“As an international speaker with more than a dozen years of experience speaking to all kinds of audiences, I can say this is a truly useful collection of tips that can help any speaker rise to the next level. I've read many books for speakers, and this is the one I'd use right before I go on stage or as I fly to my next engagement to remind me of the basics and to get a good, positive outlook thanks to its bite-sized chunks of wisdom.”

“Secrets of a Unique & Sexy Speaker sets out the rules of speaking in clear, concise, and easy-to-follow steps that take the mystery and fear out of public speaking. This is an indispensable guide for anyone who wants to, or has to, stand before an audience to deliver a message.”

—Rona Arato, author of The Last Train, a Holocaust Story

“Lucky me! I read Secrets of a Unique & Sexy Speaker before two public appearances, one in front of a hundred or so businesspeople and the other before a board of eighteen. I chose several Speaking Tips to practice and test drive. While much of the book might have you nod in recognition, if you’re aware of your own ‘ticks’ and have received feedback about your speaking, you will—as I did—benefit enormously from consistently applying these techniques to help you improve. As Marion Claire points out, speaking is a mental as well as physical sport that requires preparation to achieve greater freedom of expression. Thank you, Marion, for your thorough, practical and encouraging guidance.”

Originally a TV comedy writer and co-creator of The Love Boat TV series, Marion Claire, The Speaking Is Sexy Coach, has been a speaker’s coach and speechwriter for fifteen years. Her eNewsletter, Speaking Is Sexy, offering practical speaking tips, is available twice monthly on her website, www. marionclaire.com, along with her Free Report, “5 Magic Keys to Creating Any Speech.” She’s an experienced speechwriter, presents workshops on public speaking, and coaches CEOs, management teams, small business owners, sole practitioners, and creative artists. A recovered agoraphobic, she has a unique understanding of the fear of performing in front of an audience and speaks and coaches from personal experience on overcoming debilitating anxiety. Based in Los Angeles, she travels extensively for both business and pleasure.