This is NOT it!

A Journey Through Trauma 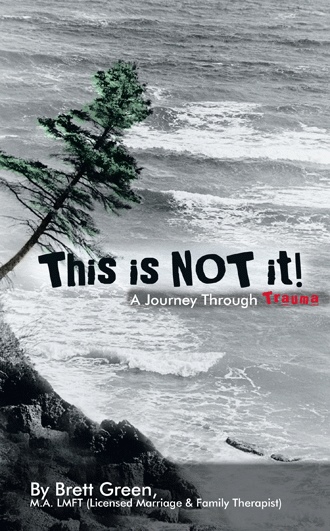 Like anyone who has suffered such an unexpected traumatic event, I found my life dramatically changed forever!

I like to compare myself to a giant oak tree that has fallen unexpectedly. Hundreds upon hundreds of roots attached to that tree have become affected and altered. In my case, I felt as though I were that giant oak tree for many years for so many people. I felt that there were so many roots that counted upon me to firmly rise up again. Even though countless people worked on this tree and tried until exhaustion to help, I could not rise! With me on center stage initially, people forgot that there were roots growing from and attached to this tree that were not acknowledged! For some, their deep wounds were not initially acknowledged or addressed—they were “merely” a trauma witnesses to the event and forgotten. I’ve heard the following many times: “You can’t un-ring the bell!” Where there is one traumatic victim of trauma—let it not be forgotten—there are many others entrenched and powerless as well.

The journey to the before and after of my fall and rise has been a very long, painful, and arduous journey - It has also been a remarkable process to experience as I will try and capture within this book. I say process because it's an ever-continuing journey—one I doubt has a final destination. I am unable to pretend I'm complete now. I’m unable to regain my previous life, to sit back and relax. On the contrary, it's a very harsh, knock-ya-back, humbling lesson that life is full of trials, tribulations, divine interventions, expectations, disappointments, improvements, and setbacks. Therefore, it’s a daily process that requires living in the moment and using my own life-learned experiences to make it through each and every day. Even more importantly, it’s a process I’ve come to know well and recognize (through my own lens) in others who have gone through traumas of a similar nature.

While traveling through this journey, I’ve learned a great deal about myself: who I really am, what I’m capable of. I’ve learned from others as well. Each of us copes with trauma in an individual way. I’ve learned valuable insights from those who are processing personal traumas and yet are striving daily for improvement within an incredibly tough mental, emotional, and physical battle. Some heal where improvement is indeed noticeable. I’ve also seen other survivors who have, in a sense, given up and the light is gone!

I’ve found that the trauma survivors who move positively forward and heal are those who can generally place themselves in the drivers’ seats of their own lives. With some mind control, they can look straight ahead in that great, big, directionless windshield called life! In that process, they can do their best to break away from fixating upon that smaller rear-view mirror of life before that reflects their trauma or disability. That rear-view mirror of the past can be such a temptation—it is often just easier than looking forward. This can be reflective of the traumatic event that may also keep one stuck in the past (and thus stuck in a great bed of hopelessness and lifeless mortality). In this case, there is no forward thinking … no forward movement. One needs to take one minute, one step or make one difference at a time and always, always move forward.

It is difficult to stop focusing on the before and after of a trauma (or the trauma of a loved one). The aftermath may be quite obvious physically (and visible to others) or simply known internally—emotionally or mentally. Like me, I imagine you can meander about mentally—looking and thinking at both edges of the road called life—and you can also emotionally, mentally, or physically crash. However, the main focus of this book is to offer the message that it’s vital to stay mindful of your personal value, love existence, remain grateful, and stay straight in the middle of your road of life. There is a life ahead for you to endure … but also one to experience and enjoy! If you can survive any intense trauma, it is my belief and message to you that you also can survive the aftermath as well. Carpe Diem!

Initially, I did not record or journal my experiences routinely. I did not think that was the best avenue for me to release any current emotions regarding this experience. In the beginning, I was in complete shock and denial, and I thought I would just simply go home—that my life would return to normal! I didn’t think I would need to review the event.

Later, as my condition persisted and worsened, the idea of expressing my experiences was brought up. I didn’t think I would ever want to reread those traumatic experiences and used that as a means of justification and bargaining. I used that excuse to avoid journaling (or being recorded, for that matter).

Any trauma… life or death experience, can either make you stronger or wallow in despair. The choice each individual makes in that situation says a lot of who they are, but more importantly, who they will become!

Brett Green continues to strive and improve to meet challenges that doctor’s once thought impossible. Throughout his journey, his determination that “This is Not it” has become his mantra and has helped him to heal and rebuild a meaningful and joyful life.

Brett has “come back” from an ordeal…a journey that few can only imagine! He has persevered when the medical field gave up on him and told him, “This was it!”-- That there was little chance for further improvement.

Brett chose not to accept that prognosis. For nearly six years he has worked through the adversity, the pain, coaxing his body to do what it didn’t want to do, the heartbreaking disappointments and also the incredible highs of each success.

Despite his remarkable and unpredictable recovery, he may always be in need of some form of rehabilitation. Still, he has chosen to adapt! As he has adapted over time, so has his family, friends and loved ones! People no longer see what Brett may not be able to do – they only see what he can do and what he has accomplished!

Brett’s innermost passion is raising his children; and also helping other survivor’s in need of court or mental health services. He maintains his business and license to practice therapy.

Hopefully this book will offer valuable insight to others facing similar situations. If there is any support that Brett may provide or a service that he can perform to assist you, please feel free to contact him through –

or visit his blog at www.BrettGreenLives.com

Brett Green, M.A., L.M.F.T. (Licensed Marriage & Family Therapist), has tremendous expertise and experience in regards to the personal journey of trauma survivors. He seeks to help those in need find their unique paths in the worlds of grief, healing, growth, recovery.

He has been in the mental health field for nearly twentytwo years. His career is truly eclectic in that he started as a probation counselor before transitioning into a part-time county mental health position where he felt he could do more and serve more children, individuals and families.

He later became the coordinator of a nonprofit agency overseeing an adult outpatient program that provided established, interesting, quality and unique services to an excess of 350 clients per week.

His administrative abilities and clinical insight eventually found him working as a family court mediator in two separate counties and court systems. He was tasked with mediating between disputing high-conflict parents in both superior courts, while making child custody recommendations that always maintained the best interests of the children in mind.

During this phase, he also opened up a private practice office and earned county certifications to operate a child abuse and neglect program and a domestic violence education program. This practice has grown and offers six separate programs. He also serves the individual or family needing one-on-one therapeutic supports as well.

However, in 2006, at the apex of his career, he experienced a traumatic brain injury that forever changed his life. Although his private practice remained in operation, his focus is now on advocating for trauma survivors and the disabled—people misunderstood, unrepresented and (quite oft en) still neglected!

He now offers a very unique and experienced blend of therapeutic services, workshops, and presentations. These services include advocacy for trauma survivors and disabled people. He also provides expertise and insight in the following arenas: the management of anger, child abuse prevention, domestic violence intervention, family enrichment and positive parenting education, and high conflict parenting and private mediation counseling. He has been a “court appointed expert” in both child custody and domestic violence cases. He is an expert in movement disorders, action myoclonus specifically.

His goal is not to provide information to the public merely. He seeks to educate and change lives within each counseling session or workshop presentation so the participant leaves with a new perspective.
He was most recently selected to be a member of the California State Department of Mental Health – Human Resources (NP) committee. He hopes to work specifically to advance the underrepresented culture of disabled people (including trauma survivors).

He sincerely hopes that people will find a renewed strength after reading the experiences detailed within this book. He hopes they can begin to regain their own sense of normalcy and right to grieve! This may ultimately serve as a stepping stone toward true healing. As stated, he believes we all have the right to move forward and heal—no matter what the circumstances are! It’s not how many times we fall that will define us… it’s how many times we choose to get back up that will!