A Journey to Wholeness 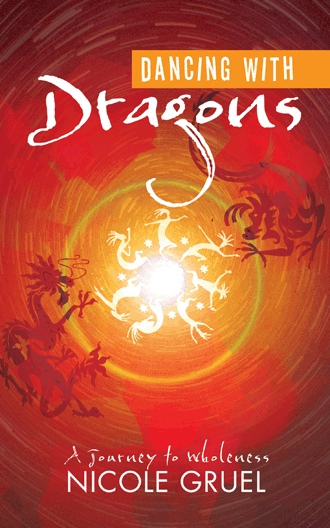 An Invitation to Dance


Those who insist they’ve got their ‘shit together’
are usually standing in it at the time.

I never knew I had dragons. Sure, I had the occasional dark moment, the odd thought I'd rather not acknowledge, wounds from the past I’d swept away, secret habits and uncomfortable feelings that I usually kept to myself. But didn't everyone? Wasn’t I just behaving appropriately with my smoke screen of a successful-enough-looking life? Yeah, I had some bumps and imperfections, but isn't that just what made me human? Wasn’t I, just like all my friends and the world I was living in, perfectly normal in my pathology?

Approaching my thirties, I certainly seemed to think so. I had a bulging library of self-help and spiritual books, had cleansed with crystals, done spells and ceremonies to clear my energetic field, sung my heart out in ashrams, and done a thousand sun salutations on the yoga mat, quit smoking more times than I could remember, gone organic, eradicated caffeine and alcohol, given up meat, embraced meat again, repeated my positive affirmations and created vision boards. I had completed years of education, loaded my brain up with information about the world, its problems, and how I could solve them. I had done my homework about human nature, probed deeply into the nature of the mind, the psyche and the soul. I had travelled to many corners of the earth, roughed it with my backpack in foreign lands, experienced exotic lovers and quietly contemplated at ancient sacred sites. I had successfully completed a career in teaching and fulfilled my dream of volunteering in a developing country and was now moving on to my next calling, being a holistic counsellor and running a small healing centre.

As I saw it, I was getting on with the next exciting phase of my life. I was doing well, and although I did not have the funds to call myself a financial success, in all other departments life was sweet. My health seemed on the mend after a rough sixteen months in Bangladesh, I was perfectly at peace with being single, and I knew what my talents were and how I was going to use them. Now that I knew what I really wanted to do with my life, it was time to get busy with creating the next grand chapter. That is what one does approaching thirty after all.

What a rude surprise it was then when the dragons decided to pay a visit. I probably could have seen them coming had I bothered to look, for their circling footprints had been closing in for some time. But of course, I ‘had it all together’, more or less and so why on earth would there be any reason to do anything but continue following my bliss and shining my light in the world?

One November morning in 2010, I found myself lying on the sofa in a cold sweat. It was the first day of my periods, a day I had come to associate with total body meltdown, but today was the worst it had ever been. My skin was clammy cold and slightly green in colour, sweat was pouring from my forehead, the sound and light of the world around me was unbearably amplified, my legs were alternating between trembling to shooting cramps from thigh to toe, my belly was waging World War III and I wasn’t sure if I wanted to throw up or explode with diarrhoea. Knowing this would eventually pass, I lay on the couch and just surrendered to the chaos, breath by breath.

But it did not pass. Usually this storm would fade away after a few hours, but today it persisted. In fact it continued for three solid days. My fever grew to the point where my mother insisted I go to hospital and my body became so weak I could barely muster the strength to stand up. I became delirious and slipped in and out of vision states. There were moments where I did not know the boundaries between waking, dreaming and meditation – it all just blurred into one kaleidoscopic drama of consciousness.

Something very deep happened in those three days. Forces, far greater than my being, overtook my body and mind and there was little I could do but breathe through it and as best as possible hold a state of witnessing. I was not doing anything; I was being done. What I have now come to call the dragons were making themselves known in a way that left little room for resistance. I could not rationalise or analyse my way out of this one. I could no longer simply talk about shadow experiences as fascinating processes of the psyche. No, I was being forced into a dance I had no control over and no way out of. The only option was to stare my fear of madness square in the face and to surrender to the possibility that I was being completely overtaken by forces from some frightening underworld. I had read books on madness and spiritual awakening, spoken with so many folks at different stages of ‘the path’, and I had a thorough knowledge on alternate states of consciousness as described by several wisdom traditions. But in this moment it was my turn to shift from being a curious bystander to an active participant. As though subconsciously preparing myself all these years, equipping myself with knowledge to navigate the terrains of the shadow world, I was now being sucked into its vortex with no idea of when or if I would ever emerge again.

This initiation into the shadow world, into the realm of the dragons, is the journey I would like to share with you here. It is a far-removed journey from that of the love and light path I had followed for many years, and yet, it is also the perfect complement to what had become a rather lopsided journey. I once heard that ‘the brighter the light, the darker the shadow’ and thus, I guess it was only fitting that I eventually tumble into this world like Alice down the formidable rabbit hole, for the magical faerie lights and enticing invitation to enlightenment had certainly enchanted me for quite some time. It was not by conscious choice that I agreed to this journey, rather, because of my persistent refusal to dance with the dragons my subconscious was forced to conspire with greater Spirit to turn my life upside down, prying my soul open and throwing me raw into the bellows of the beast. There are probably more elegant ways to go about this dance, but this was the way I needed to experience them in order to really hear their messages. The self-knowing and self-mastery I believed I had developed over the years had actually shielded me from the most tender parts of myself which were crying out for attention.

My story is not unique. We all get the messages, and we all have the ability to tune into whatever we most need to see for whatever stage of life we find ourselves. It is our choice, always, to listen to and respond to their calls or not. We get many chances to choose to listen until one day we may find, like I did, that there is no longer any choice and that the dragons will make themselves felt, seen and heard and you (as well as those around you) will become witness to your own shadow unfolding in all its glory. This is not pretty, but sometimes it is necessary for we have all come to this earth to grow as human beings, to evolve as souls and to contribute to the greater self-realisation of consciousness. I was just a littler slower to really get the implications of this.

Dragons are ancient mystical creatures that come bearing gifts and messages from the deepest and darkest corners of the psyche. For those who dare to dance with them, secrets from the personal and collective unconscious are revealed in the most unexpected and creative of ways. The dragons are wise and experienced guides in matters of the shadow and journeying with them can awaken the soul to greater communion with Spirit and wholeness in all dimensions of life.

In Dancing with Dragons, Nicole Gruel shares an intimate and personal account of meeting the dragons whilst experiencing total body meltdown. After years of travelling paths of ‘love and light’, she recalls how the dragons came to bring balance to what had become a lop-sided way of being. By honestly facing that which remained hidden and through integrating all that surfaced, she describes how she came into greater alignment with her most authentic Self. As she travels through the seven chakras—the portals of psychological, somatic and spiritual knowing—she shares the complex struggles ego encounters as the being becomes whole.

This book is an invitation into the fascinating and trepidatious world of the dragons that reside within each of us. It speaks to the most primal and archetypal patterns of the soul journey, and sheds light on the many obstacles the ego faces in this earthly life. When we accept the invitation to dance, we are moved through the alchemical fires and who knows…we may even stumble across the gold that awaits.

Nicole Gruel is a storyweaver with an insatiable enthusiasm for inner alchemy and the co-creative process. She has trained as a holistic counsellor, Soul Purpose Facilitator, Chakradance&™ Instructor, Psychological Type practitioner and is regularly involved in community development and enrichment projects locally and across the globe. She uses a fusion of archetypes, Jungian psychological type, Eastern mysticism and sacred ritual to journey through the soulscape of the individual and the collective. She lives on the northern beaches of Sydney, Australia.