The Excellent Adventures of Max and Madison 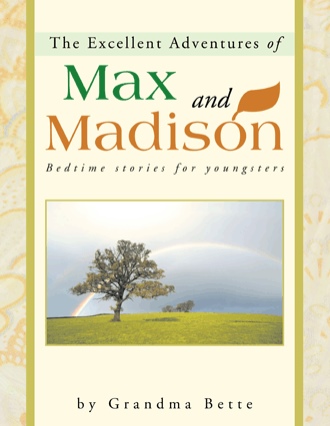 Max slowly opened his eyes and looked around the bedroom. Something had woken him up this morning but it was not the alarm clock. The house was very quiet and everyone else was still asleep. It was bright and sunny outside and a little beam of sunlight had shone onto his eyelids, that was what had woken him up.

Well, Max thought to himself, it seems very sunny for six o’clock in the morning. He checked his digital clock which sat on the table next to his bed. Oh no it was twenty minutes before seven! What was going on, the whole family had slept in, how could this have happened?

In the kitchen there was a cuckoo clock which looked like a little wooden house. Every hour during the day, Clarence the cuckoo would pop out of a little window at the top of the house and call out the hours. Everyone relied on Clarence to make sure that they ate their meals regularly and left for work and kindergarden on time. Then in the evening, Max and his sister Madison went to bed when Clarence cuckooed seven times. But this morning there was not a sound from the kitchen, the house was quiet, too quiet. What has happened to Clarence?

Max hopped out of bed, put on his slippers and walked out to the kitchen. The little window at the top of the clock was closed, so he very carefully climbed up on mummy’s kitchen steps and peeked inside. There was poor Clarence still in his little nest looking very sad. He saw Max looking in and waved his wing, so Max opened the window and asked what was wrong. Clarence whispered that he had a sore throat and was unable to call out the time today and was very upset that he had allowed the family to oversleep and perhaps be late for work.

Max knew that when he had a sore throat his mummy would make him a drink of lemon juice and honey, so he told Clarence to just relax and that he would be back soon. Then he raced out into the back yard and picked a fresh lemon from the tree then returned to the kitchen, squeezed some juice and mixed it in a very small glass with water and some of Mrs Jill’s farm fresh honey. Carefully he passed it through the window for Clarence to drink.

“This will fix you right up,” Max told him, “and it will be our little secret.” Then Max went to his room to shower and dress for the day and returned to the kitchen. He set about preparing the table for breakfast in order to save his family some time, then he sat down and waited and waited. It was nearly seven, would Clarence recover his voice in time?

Then at seven o’clock, right on time, the window opened, the little platform of the clock popped out and Clarence sang out the time in very clear cuckoos. He waved thank you to Max and popped back inside the clock. It was not long before Max heard the sounds of mum and dad and his sister Madison all getting out of bed and noticing that they were a little late, they all hurried to have breakfast and get ready for their day. Mummy thanked Max for setting the table that morning and then everyone went off to work, school and kindergarten on time.

The door slams! A little voice calls. ”Bye-bye mum I am going to the shops.” Mummy looks out of the window and sees Madison walking up the street with her shopping basket. She is all dressed up for her outing but mummy notices that Madison seems to have forgotten something. Shoes, Madison is not wearing any shoes. Hmmm, mummy thinks to herself, perhaps this might be a good time to teach little Madison how to shop, so she calls out for Madison to wait, grabs her purse and hurries to catch up with the four year old shoeless girl all dressed in pink.

Arriving at the shopping mall, mummy noticed that Madison’s feet are a bit dirty from walking in the dusty street and they stopped near the entrance while mummy cleaned her feet with a tissue. Then they make their way straight to the shoe shop. Madison tells the sales lady whose name is Nicole, that she needs pretty shoes, so the lady measures Madison’s feet carefully to find out which size she will need. “Four, you need a size four” Nicole tells her “so now you can look around the whole shop and see which shoe you like in that size.”

Madison was confused, shopping was so much harder than she had realised, how would she ever decide which pair to buy? Then mummy came to the rescue. She whispered quietly to Nicole who went down to the back of the shop, climbed up a big ladder and came back down with a small box marked on the front with a big number four. “Here try these on” said Nicole.

Inside was the most beautiful pair of pink sparkly shoes Madison had ever seen and she hurried to put them on her little feet. Then she gave mummy a really big smile, they were just perfect. They matched her lovely pink dress and Madison was now pink all over! Then Nicole put the shoebox in a shiny silver carry bag and tied it with pink and silver ribbons.

Mummy paid for the shoes and then they went off to a café where they had a sandwich and a glass of juice. As they both walked back to their house mummy explained to Madison that you always “do lunch” when you shop, in fact it is one of the most important rules of shopping. Madison said thank you to mummy for helping her today and decided that she was very lucky that her mummy was so smart and new all of the rules of shopping. Madison was eager to learn more, so perhaps they could go shopping again next week? 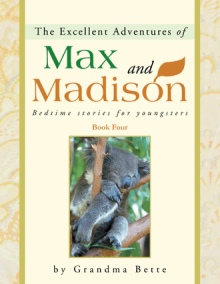 The Excellent Adventures of Max and Madison
Grandma Bette
$21.02

There is a little country town not very far from Canberra in Australia, and this is where all of these adventures take place. Max is only five years old and his sister is a little younger. They live in a little cottage with their parents Kerrie and Michael. Max has just started school while Madison goes to kindergarden. The children are very interested in the world around them and are always looking to learn about new and interesting things. Max is also learning to be a magician. Across from their house is a large area of native Australian forest where many birds and bush animals live together, this is called a national park. Joe MacDonald and his wife Mrs Jill have a farm just outside of town where they keep dairy cows, chickens, geese and ducks and keep bees. They make a living by selling their produce at the weekly market near town. There always seems to be something happening in this small town and Max and Madison are usually involved somehow. They are joined sometimes by their friends the Baker cousins.

I am Australian bornin my early sixties with an Italian born husband and we live in the outer suburbs of Melbourne Australia. We have three grown children one of whom lives in Canberra with his partner and two children. These bedtime stories were written for my grandchildren.