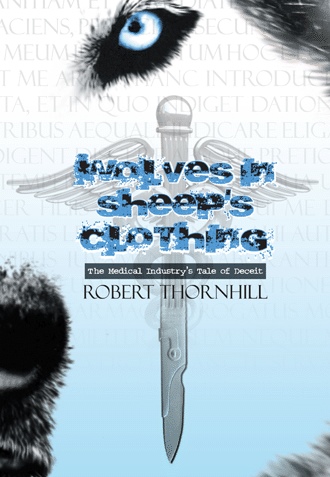 Walt Williams is a sixty-eight year old rookie cop. When a holistic physician is murdered, Walt becomes entangled in the high-powered world of corporate giants and corrupt politicians.

The Police Department and the FBI join forces and Walt goes undercover in a 'sting' operation in order to expose those involved in this tangled web of intrigue and political corruption, and in doing so, becomes the target of a vicious assassin.

Walt is also a 'rookie husband' and his new bride, Maggie, is determined to convert him from a life of comfort food and bachelor indulgence to a healthier lifestyle filled with organic food, vitamins, supplements and colon cleanses.

A dead-serious mystery with hilarious twists!

Reader review: "In Wolves In Sheep's Clothing, you are reading about the crimes that involve Pharmaceutical companies, healthcare professionals, the FDA and the FTC and to what end? Money, power and greed that affects the well being of all of us!

Once I opened this book and started reading the first chapter, I could not put it down and wanted to see just how far into the political system this would go. Just how far would a pharmaceutical company go to keep their products on the market? What would happen if a study was released announcing to the world the fact that medicine is being sold and provided to patients unnecessarily without alternative methods being discussed?

The reading grabs you from the first murder and you to find yourself hunting for the hawk-faced man along with the detectives.

The author does a great job with the characters, keeping you involved in the medical mystery and you learn about some alternatives that you could research on your own."

Robert Thornhill began writing at the age of sixty-six, and in two short years has penned six novels in the Lady Justice mystery/comedy series, the seven volume Rainbow Road series of chapter books for children, a cookbook and a mini-autobiography. Robert holds a master’s degree in psychology, but his wit and insight come from his varied occupations including thirty years as a real estate broker. He lives with his wife, Peg, in Independence, Mo. Visit him on the Web at: http://BooksByBob.com