Marah Hein - The Legend Of A Viking Woman 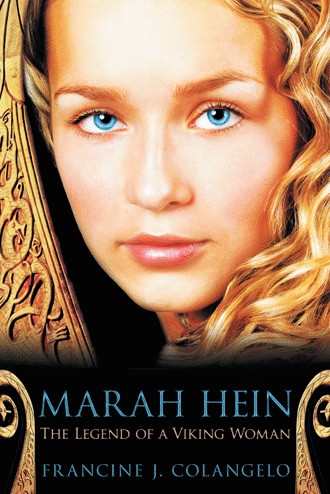 All over the Nordic lands, they gathered around the fire to hear the captivating tales of their gods. The won-ders of Creation, the hardships of battles, the wavering will of some, the steadfastness of others, the choices, the treachery, the tribulations, the passion... the glory of the Ases and the magnificence of Walhalla galvanized the old and the young, the weak and the strong alike.
Respecting Mother Nature under the sacred name of Freya, admiring her wisdom, following her rules, appre-ciating her bounty and thanking her for it all stood at the core of life itself. Winter reigned for long months on the Norsemen's lands. It allowed a slower pace, one more attuned to the inner self. Springtime gave out the first signs that the earth was ready to cooperate with their labour. Slowly, it opened itself up and displayed the richness of its possibilities in the song of the birds returning to nest, in the beauty of the reborn vegeta-tion and in a distinct kind of light.
Summertime. Yes, surely, summertime came all of a sudden. One day, spring simply was over and summer had settled in. One then took care of the Earth and its children, making sure that fruits, vegetables, and ani-mals prospered. Autumn undoubtedly brought along a time of festivities, those of harvesting. Everyone would thank Life for having been so generous and for that generosity to have taken multiple forms.
To each day its duties and its blessings.
To each season its reasons for being.
But always, this people blessed by the gods remained fervently devoted to Freya.

In the middle of one such tiny Nordic village, I, Marah, was born. A long baby, gifted with ample blond hair. A soft baby, a happy baby... a slightly whimsical baby too. Mine was a large family of solid children with brave hearts and sparkling eyes. Still, the augurs had spoken of my birth in such terms that my arrival could not go unnoticed.
My mother was chief of the village of Geörk. Tagik came from a long lineage of powerful women, most re-spected, honouring the noblest customs and the will of the Ases. As in many places in the Norse people’s lands, from mother to daughter, for generations, Tagik’s family had inspired Geörk by its intrepidity and its wisdom.
By the grace of the Ases, I was born a Viking. My young life followed the rhythm of the seasons, was imbued with love and, in many ways, was also privileged. However, privileges entailed responsibilities. Thus, my upbringing was devoted to equip me to face them by properly developing my physical, mental and spiritual abilities.
Much was done to nurture my sense of duty and I was tought very early in life that, in the plans of the gods, everybody had a part to play. Therefore, everybody was important. Indeed, what good could a leader do if they had no one to govern, to defend and to serve?
The stories of the gods of Ases punctuated my life. Odin and Freya tucked me in at night, after having shared with me their numerous adventures and given me their acts of wisdom in example. They fascinated me. But mostly, they inspired my respect. Yet that sentiment did not come from any obligation due to our gods. Not at all. I sincerely honoured their judgment, their intelligence, their grace, their courage and their creativity. They were my mentors. I was eager to learn everything one could know about gods and to emulate them to the best of my limited human capabilities.
Still, it was Freya whom I truly idolized. She was, and would remain until my last breath, the one I was most loyal to. She was a mother to us all, Mother-Earth, Mother-Nature. Deep inside my soul, I recognized that she was the creative energy behind all life forms on Earth. And that kind of loving creativity touched me immensely. Everywhere, it was she whom I saw giving life. This, I understood very early. It was for her and through her that our lives became significant. That, I understood only later.
My village was beautiful and old. Geörk was nested along an agile river. Our small but nonetheless comfort-able houses were set in a series of circles. From afar, one could see the snowy crown of the hills nearby. And right next to Geörk, was a forest fecund in living, crawling, jumping, flying creatures. Those, sometimes noisy, sometimes mute, beings were not only our neighbours but also our companions and teachers.
Horses were particularly dear to my heart. Their proud bearing met something in me. Their gentleness, which could turn into rebellion impetuously, charmed me. And their strength called my consideration. On my tenth birthday, my mother gave me what was to remain one of the nicest presents I ever received: Tania, a young mare with a naughty character. No one had ever climbed on her back. Hence, my gift, like most of those I received in my youth, was also meant to be an important lesson: that of breaking her in. Curbing her was not an easy task. However, it corresponded to my own taming. For her as much as for myself, domestication was not to become a renunciation of one’s true personality nor a re-modeling. Rather, it was an opportunity to appraise the value of cooperation and regard. As time went by, Tania became my true companion.

Under the rigorous climate as well as the unbending social conditions of Geörk, physical fitness and the de-velopment of abilities were instrumental to survival. Thus, we formed a community of noble and skillful war-riors. However, the warrior’s fate assigned to me by the soothsayers only increased these requirements in my case. Like all the youths ever to have lived in Geörk, I was tought how to use sword, battle-ax, hammer and shield.
Eventually, there came a time in my studies where I could manipulate them with a relative ease. It all came together from the moment when our teacher encouraged us to perceive our weapons as an extension of our-selves. When, years later, I would earn a living as a warrior, it was this notion that contributed to my success. I certainly found no gratification in bloodshed. For me, the choice of arms fit to measure was simply like that of good tools for any craftsman. Victory came from the concern for a job well done. It was a necessity, that of fulfilling one’s duties.
To encourage us and kindle our desire to learn, our master of arms organized championships at the end of each summer. The autumn moon of my fourteenth year marked the time of my first noticeable achievement in those community games. On that occasion, Bulga had prepared three competitions: a horse race, duels and a fight on horseback.
It was a magnificent day... a most memorable day! Oh! how absolutely memorable that day was, for it was when I met Gürich. A superb blond with eyes shining like the river under the full summer moon. Gürich with his broad shoulders, his long sturdy legs. Gürich with his divine smile... Gürich, who exuded dignity and strength.
As soon as I laid eyes on him, something in me quivered. It was a galvanizing agitation, yet unknown, and perfectly out of my control.

Discover the enthralling tale of a woman who finds the
luminous glory of the heart through love, adventure and
exploration on the path of the true Spiritual Warrior.
‘Francine’s uncanny and flamboyant style mesmerises to the point of being blissed out.’
Winston McQuade,
TV correspondant
‘Marah lives inside our hearts. We feel and taste both the bitter and
sweet fruit of her trials and triumphs. Th is legend’s characters are
creative and complex and become part of our psyche. Francine’s writing is pure genious.’
Christine Marie Peters,
Radio host
Francine J. Colangelo worked for 20
years in the communication arena. She devoted
most of her professional life using her talent as a
creative writer to serve other artists and promote
their work. Now she’s ready to stand as an artist
herself. As such she loves to explore new avenues
where she invites us to join her. She’s interested
in everything that contributes to the unfolding
of our highest potential. And when she needs a rest, she enjoys an
episode of ‘Northern Exposure’ on dvd. Her poem ‘Gracious Flow’
is semi-finalist in the World Poetry Contest.
To learn more about Francine and what she’s up to now visit
www.blueagora.com

Francine J. Colangelo worked for 20
years in the communication arena. She devoted
most of her professional life using her talent as a
creative writer to serve other artists and promote
their work. Now she’s ready to stand as an artist
herself. As such she loves to explore new avenues
where she invites us to join her. She’s interested
in everything that contributes to the unfolding
of our highest potential. And when she needs a rest, she enjoys an
episode of ‘Northern Exposure’ on dvd. Her poem ‘Gracious Flow’
is semi-finalist in the World Poetry Contest.
To learn more about Francine and what she’s up to now visit
www.blueagora.com