The Eye of the Goddess

Protector of the Crystal Children 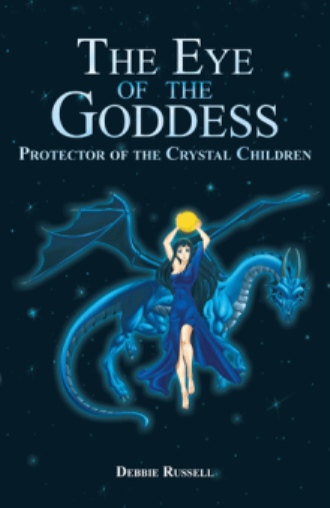 Something was after Jordan. She didn’t know what, but she frantically looked around to try to find it. The problem was … there was nothing but darkness. She could hear footsteps, and deep inside her gut she could feel that whatever was coming was definitely something she needed to avoid. She could detect a faint light, and it illuminated her path enough that she realized she was in a maze. Where was she supposed to turn? Where was the light really coming from? She didn’t have time to think about it. She couldn’t just stand still. There was something in the darkness with her, and she didn’t want to find out what it was. She had to keep moving forward, away from that presence. She tried to run toward the light, but she stumbled and fell a couple of times along the way. Each time, as she got up, she cringed and tried to shield herself. She could almost feel an ice-cold hand wrap around her neck, and in the darkness, she couldn’t tell if it was real or just her imagination. She was scratched, skinned, and battered. But she didn’t give up. She was going to find a way out of the darkness no matter what. She turned the corner, and finally, she saw the way out. Straight ahead, the light seemed to be getting brighter. Triumphantly, she ran faster so she could finally break free. As she got closer, she shielded her eyes from the brightness. It was too intense in comparison to where she had come from. As she emerged from the tunnel, she saw some familiar faces. However, the rest of their appearance seemed completely different. Her mother was standing there, her long, brown hair gently whipping in the wind that was circling them. But her mother’s form was shrouded in a pearl-white glow. Next to her mother was Jordan’s dark-haired, sixteen-year-old brother. He smiled at Jordan and nodded in her direction, seeming to indicate that she was where she needed to be. He was also surrounded by the same colored aura. She tried to scream, but no sound came out of her mouth. It seemed that wherever this place was, it was devoid of verbal communication. Feeling panicked, she gestured at the tunnel, desperate to tell them about the approaching danger. She turned back to them, her body shaking, and tried to motion for them to run away. She didn’t want to get caught by whatever was after her, and she certainly didn’t want it to get her family either. She wanted them to run and to take her with them. But strangely, instead of heeding her unspoken warning, her mother and brother simply stepped aside. In their place appeared a handsome, tall, blond-haired man. Well, maybe not a man, but an older teenage boy that seemed to be about the same age as her older brother. Again, he had the same pearl-white aura that her family had. Jordan looked down at herself, and she had the same aura all over her as well. What kind of place was this that everyone seemed to be glowing? The blond boy gestured an open hand toward her, and she just looked at it for a minute. A warm smile crossed his face, as if he was trying to say that he wouldn’t harm her. However, she still did not accept his hand. Who is he and where did he come from? Why should I trust him? Maybe he’s the one I’ve been running from. She looked back toward the tunnel. The scary presence might still come out of it at any second. Noticing her concern, the boy looked toward the tunnel, and with a simple wave of his hand, the tunnel sealed up. Then, before her eyes, the entire dark-red rock formation from where she had emerged disappeared into thin air. She turned toward the mysterious boy again. How does he have the power to do that? And did he really just get rid of whoever or whatever was following me? The older blond boy walked up and gently put his arm around her shoulder. She suspiciously looked at the arm that was touching her and reluctantly followed him away from her original spot. In front of her, she could see a huge crowd of other glowing children standing in the middle of a rolling green meadow. Each of these children had striking, radiant eyes. Jordan was taken aback by this at first. She had large, crystal blue eyes, which were unusual compared to most people she met. But the eyes of these children all seemed to match.

Being a teenager is difficult enough in today’s world, but imagine you are thirteen years old and just learned that you are designated to be the leader of a generation of incarnated angels. Such is the assigned duty of Jordan Ivanov, who discovers through a beautiful amulet she receives on her birthday that her destiny was set in motion several generations ago.

Protector of the Crystal Children is the first novel in a series entitled The Eye of the Goddess. This series explores the angelic realm and all of its possibilities through the eyes of two adolescents and their mother. They struggle to accept their newly discovered powers and learn to appreciate the purpose for which they have been chosen. At the heart of Protector of the Crystal Children is the love and trust that exists among members of a family and how that security can be tested when life becomes complicated.

Debbie Russell is a first-time author who has spent years studying new age concepts such as angels, meditation, and past lives.

In Protector of the Crystal Children, the teenage superheroes are also incarnated angels. In addition, the story introduces the idea of past lives playing a role in a person’s current destiny. Since the concepts of incarnated angels and past lives are not typically addressed in mainstream fiction, the intention of this story is to fill that void in a way that will excite young readers and allow them to consider possibilities that had not been allowed before.

Most importantly, Protector of the Crystal Children is a love offering to her own kids. Mark and Jordan, the two teenagers in the book, are modeled after her children. This book is a gift to her son and daughter, and she hopes to provide a lasting keepsake of her beloved family that will be enjoyed by future generations.