What’s It Going to Take? 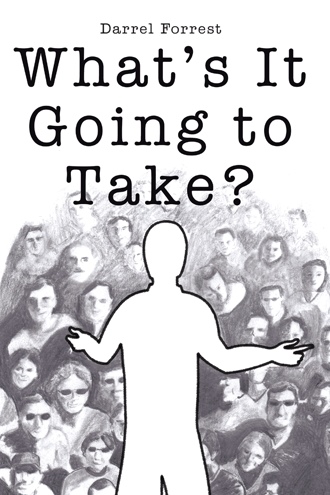 The human race has taken a wrong turn sometime in the past million years. But from within the dark realty that face most there is a deeply entrenched hope, that we can turn things around.

The world is now drowning in constant conflict, as individuals, societies, and governments each fight to keep a hold on what they believe is theirs. World leaders seem intent on maintaining their borders as humanity faces the prospect of extinction. The world’s financial future is perilous at best. Society stands at the precipice looking into the abyss of its own demise. The world population has peaked and appears to be decreasing at an alarming rate. Just after the turn of the twenty-first century, an ancient parchment comes to light that throws doubt over the origins of the Christian church. One man has been tasked to awaken the world from its ego-induced slumber. Brayden, a young man separated from contemporary society may hold the answers. In the countless hours he has to himself, he has dedicated his life to learning the real reasons humanity had created such a hopeless future as a race. With the help of his spirit guide, he hopes to find the way to free humanity from its self-imposed fate. Will we listen in time to avert the inevitable? What will it take for us to realize the mistakes of our ways? Can we ever live in peace?

Darrel Forrest is an ex-banker who became disillusioned with the greed and egos dominating finance and, so it seemed, the world. Convinced life consisted of more than participation in the endless material pursuits and the satisfaction of ego, he has spent much of his life investigating the truths hidden by the clouds of ego.