A Yearlong Diary of Transformation 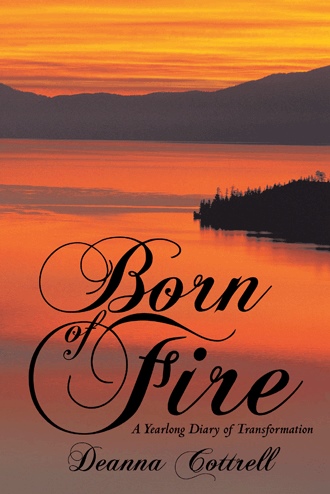 Born of Fire is a story of personal-growth for a woman struggling to regain her footing after near blindness, and the subsequent end of her twenty-five-year marriage.

Overwhelmed by feelings of rejection, loneliness, and isolation in the marshes of the Neuse River in North Carolina, she began to make cryptic notes of feelings and dreams, and then essays on memories of her earlier life.

Born of Fire is a one-year diary of a sensitive, spiritual, and intuitive being who faced the destruction of her life as she knew it, and follows her attempt to heal, transform her life, and open herself to a higher wisdom.

On the perilous path of spiritual enlightenment, Ms. Cottrell describes the miracles she witnessed as she was cast repeatedly into the fire of transformation.

Deanna Cottrell lives in Hartford, New York, in the foothills of the Adirondack Mountains, along with her beloved companion dog, Sebastian. She is the mother of a son and three daughters, and has thirteen grandchildren. Her son Matthew passed from this life in 2010.

Her time is spent in her gardens, writing and painting with oils or watercolors, and in the winter months, she lives in Naples, Florida, where she additionally enjoys biking to the beach.