A Journey from Heartbreak to Bliss 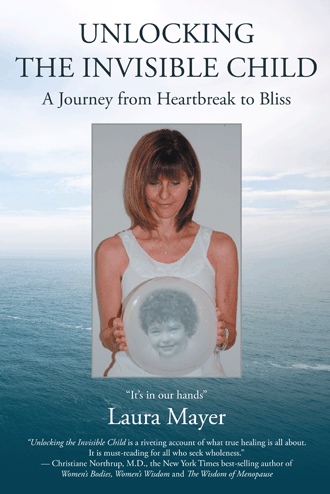 Chapter 1
My Story
I wanted to find the truth even if it killed me—and it almost did.

Joyful at age fifty-five, I witness how my life has completely turned around. Unable to handle the world I lived in as a young child, I shut down. Of course, at the time I wasn’t aware of doing this, but today it’s obvious that my cells heard my cry and reacted to the emotional little girl struggling to be noticed and loved. I became the product of an environment in which the message was: Children should be seen and not heard. But I was also not meant to be seen—a belief locking into place a series of traumas that eventually imprisoned me emotionally and physically

The Lesser Child
She was the child born of hope; I was born of despair. She was my older sister. When I was conceived, my seventeen-year-old mother felt disillusioned in her marriage to my father, whose outlook on life was based on fear and defeat. At the young age of twenty, Buddy was living out a death sentence battling Hodgkin’s disease. He had been in the Air Force, stationed at the nuclear testing sight in the Nevada desert, surviving in the only way he knew how: by fighting the world.
It is no wonder my birth was traumatic—two months premature and necessitating my reliance on incubator support for three weeks.  I’ll never know if Buddy came to hold me or reached his hands through the plastic draping around the incubator to touch me. I longed for presence throughout my young life.
While he apparently spent most of his time in and out of veteran’s hospitals, battling his terminal illness, my mother traveled between Maine, where his family resided, and Manhattan, where her mother lived. My mother, sister, and I soon moved into my grandmother’s apartment in Manhattan. Nana, as I called her, was divorced and lived with her teenage son Carl, who now shared his apartment with his older sister and her two young babies. Nana Ruth, who played the role of mother, guided us through this tumultuous period in our lives, while my grandpa lived a short distance away.
My mother divorced Buddy when I was two years old and soon afterward met Saul, a dentist in the Air Force, and married him.  Six months later, my mother left my sister and me behind and joined Saul in Newfoundland to set up our home. While I have no memory of this incident, my sister remembers feeling deep abandonment and fury that my mother would leave her to be with him. During this time, we lived with Nana until my mother returned four months later to take us to our new home on the Air Force Base in Stevensville, Newfoundland, far away from Nana and Grandpa.
Buddy died at age twenty-five, shortly after my third birthday. I have no memories of him, although I do have photographs.
My story was all about suffering, and my suffering as a young child came from feeling disconnected from my parents and older sister, a sense of isolation that later manifested itself in the form of a physical dis-ease. In addition, I suffered from the loss of my biological father and used my bereavement as a crutch to keep my sadness and emptiness alive.


The Suffering Child
Throughout my childhood and early teen years, emotional traumas took up residence in my cellular makeup and my personality responded. At age three, for example, I announced one evening during dinner that I wanted to be a dog, and I started barking as I moved away from the table and onto the floor.  My new father, finding my antics neither funny nor cute, proceeded to walk me out to our front porch. “You’ll have to stay here because this is where dogs belong,” he said.  Years later I wondered why my mother or sister didn’t come to my rescue, and why I lacked the courage to go inside, scream, or fight. Why did I just stand outside the door watching my family carry on as usual at the dinner table?
When I did start to cry, because I had to go to the bathroom, my new father said, “Dogs go to the bathroom outside.” Intense fear coursed through me as I refused to suffer further embarrassment by peeing in my pants. When I was later let back into the house, my father said, “I guess you’ll never want to be a dog again.”
That day I lost piece of myself to a world of grief, shame, and despair. The resulting sense of separation, alienation, and annihilation soon became part of my personality. And over time this primordial scene of humiliating abandonment crystallized into a feeling of being a perpetual outsider looking in. Worse, my family supported my vision of myself as a hapless victim of circumstance and played their parts perfectly. My mother, still a child herself, together with my sister and my new father were unable to stir a sense of self-awareness within me. As such, the truth of who I was beneath the facade of my story was not to be revealed.
It took forty years of battling the effects of a crippling disease before I decided not to suffer anymore. “Either I heal or I’m out of here,” I stated emphatically to the universe, fully believing that healing was a physical event. Very soon I realized that this type of healing was soul deep, cellular in nature, and that healing the wounds of my heart would eventually heal every other piece of my being and reveal my true nature.

To Tell the Truth
I have always honored truth. It hurt me when people lied or twisted the facts.   I learned very young that truth wasn’t always necessary which set up a conflict in my core beliefs.  For example, soon after my (step) father legally adopted both my sister and me, I shared with a friend that my biological father died when I was three. My mother scolded me for revealing the truth and told me not to tell anyone stating, “Sometimes it’s best not to tell the truth.”  I left it alone, and we never discussed it again. Even though I heard my mother’s words, I knew this sentiment could never apply to the girl who came into the world seeking truth.  This scenario repeated itself throughout my life.

“Love Me Do”
Invisible to myself at age nine, I hid away from life without any clue that I was the perpetrator of my own disembodiment. I felt so lost that I came to believe the only way I could be loved was to be in the hospital. I had learned from watching television that everyone in the hospital gets attended to. So it came as no surprise that one night while trying to fall asleep, I cried out to God, “Maybe if I were in the hospital, the Beatles would come and visit me and then I would be loved by someone.” Four years later I ended up in the hospital, but the Beatles never came to visit me.

Searching for the meaning of life’s experiences? Your soul purpose? Unlocking the Invisible Child: A Journey from Heartbreak to Bliss reveals the key to self-healing of body and mind, through the grace and gratitude of the heart and soul, via the all-knowing, compassionate invisible child within.

In Unlocking the Invisible Child: A Journey from Heartbreak to Bliss, Laura Mayer shares her remarkable journey. It began with the discovery of a crippling and supposedly fatal disease at age fourteen. She chronicles the forty-year course of the disease, along with her multistage self-healing process, and suggests that anyone can take a similar journey to heal their own life. Mayer knows that all the medicine in the world could not have healed her, had she not gone deeper and unlocked the invisible child inside her.

Over the past five years, Mayer has witnessed a total transformation in body, mind, and spirit. Aware that if she could mend her heart, her body would heal, she started to trust in the universe and listen to its messages.

“There are as many paths toward healing as there are individuals in need of healing. This means there is no formula, no sure-fire, cookie-cutter method that applies to everyone. Unlocking the Invisible Child is the amazing account of Laura Mayer’s remarkable journey. She reveals to us a truth—that healing is and has always been the unique journey of the soul. Mayer writes from the heart. Her courageous account will inspire and encourage anyone who wants to be more than they are at present.”
— Larry Dossey, M.D.
author of The Power of Premonitions, Healing Words, and Reinventing Medicine

LAURA MAYER, founder of Soul Dancing Healing Practice, bridges her clinical expertise with her spiritual knowing. She is a spiritual transformational counselor, licensed occupational therapist, motivational speaker, and intuitive healer. She is a facilitator of Soul Memory Discovery and Spiritual Indigo Healing. Mayer’s gift and greatest joy is in opening people’s hearts and empowering others to be fully seen, fully heard, and fully present. Mayer’s work spans three decades as a licensed occupational therapist in the field of psychiatry and pediatrics. As a master healer, Mayer’s capacity to go deep within the soul will assist you in igniting your light to be the best you can be, while tapping into the source of pain dormant in your core. Mayer currently resides in Tenafly, New Jersey.