FROM SEVEN HILLS TO THE SEVEN SEAS

A memoir of a boy adrift 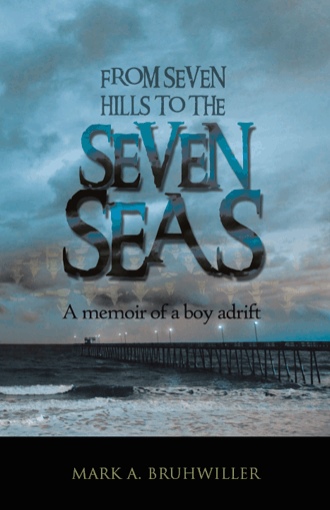 It was early evening at Sydney’s Central Station on a raw, miserable and rainy night when I first started to feel the fear of being alone, although I was in the presence of at least a hundred other lost souls, all Junior Recruits, volunteers and now guests of the Royal Australian Navy. I was fifteen years old as were most of the other children.

I say children because we were; I guess we were mostly uncontrollable in our own environment at home, but not overtly so in comparison to our youth of today. So here we were after jumping up and down wanting our parents to sign the necessary papers to let us spread out delicate wings, otherwise we would make their lives more miserable than they already were. Eventually, as we grew to know each other, all our stories seemed to articulate a common home situation, except of course the young petty criminals who were ‘advised’ to sign up or be institutionalised.

I had asked my parents if I could join and when they could see no alternative to cope with my wicked ways, they agreed, even though the H.M.A.S Melbourne had taken eighty two lives at sea in a mishap with H.M.A.S. Voyager, and then sunk the U.S.S. Frank E. Evans a year after I joined, with the loss of seventy four lives. In addition, I had just received my orders the very month H.M.A.S. Hobart took direct hits on the gunline in Vietnam with tragic loss of life in June 1968. My poor parents must have been tearing their hair out, especially with both their sons now serving.

With the Vietnam War in full swing my older brother was already in the army and only months away from being shipped to Vung Tau as a captain in audit.

Let me say here I, in no way, consider or compare myself with those poor souls who served in the ‘boonies’ in country; still, years later it was told to me in no uncertain terms that we had all signed on to protect our country in a time of war with no certainty as to how our enemies would react to our retaliating to their aggression. We were there for twelve years to defend and die if necessary. And I was not really surprised to learn also, in the same conversation, how ten to twenty per cent actually saw action, while all other personnel served in a supporting role, as did we. Nevertheless, he confirmed danger lurked everywhere for all those who did serve.

A story was told to me when I embarked on the Vung Tau Ferry- H.M.A.S. Sydney- the following year after I joined, of a young soldier who stepped onto a rusty nail the day after he set foot in the war zone. Within a few days he had developed septicaemia, which led to other severe health problems; finally he was sent home, only then to be granted a military pension due to ongoing medical conditions.

1968 was also a time of protests, American personnel on R and R (Rest and Recreation), drug culture, corruption, free love, of which I had been a reluctant non-participant, and the decline of European communism. Also, the invasion of Czechoslovakia, the resistance to totalitarianism in Poland, East Germany and the Soviet Union, and with communist revolutions in Cambodia and Vietnam taking a hold and shaking to hell out of the West, our governments were in a quandary. Furthermore, with the violent student demonstrations in western democracies and the assassinations of Martin Luther King and Robert Kennedy, Richard Nixon then came to power in the United States and escalated the war in Vietnam. This was due to the Tet Offensive early in 1968, which saw the near defeat of allied forces and the takeover of the south by their northern antagonists. Sponsored by China at the time the affinity by the North Vietnamese toward their ally was not all-encompassing though, with the Vietnamese eventually disassociating themselves from China soon after our withdrawal.

John Gorton had become Prime Minister by default after, most say, the accidental drowning of the then Prime Minister, Harold Holt. Movies like Kubrick’s 2001, Bonnie and Clyde and the Graduate were all the rage, while hits like Mrs Robinson, Hey Jude, Sunshine of Your Love from Cream, Born to Be Wild by Steppenwolf and the Stones Jumpin’ Jack Flash topped the charts.

As for me, I was homesick four thousand miles away for Merrilee Rush’s Angle of the Morning, Goldsboro’s Honey, The Stone Phoneys’ (I am, and always will be a fan of Linda Ronstadt) Different Drum, and Bridge Over Troubled Water first released in 1969 along with Nilsson’s Everybody’s Talkin’ (at me). Such was my disposition, then. .

Some even say 1968 was a year that changed the world, and here I was, five foot nothing and six stone wringing wet, fifteen years old and ready to defend my country: Yes, 1968 definitely changed me.

This memoir/autobiography celebrates 50 years of Junior Recruit service to our navy. Established in 1960 and decommissioned in 1984 the story follows the life of a 15 year old inducted into the service for twelve years in 1968 and sent to Vietnam on the Vung Tau Ferry (H.M.A.S. Sydney) the following year. His somewhat capricious journey begins from his hometown of Seven Hills, to the Seven Seas, with a hint of mysticism along the way.

The Commemorative year of 2010 recognised the contributions made by young teens, many still children, to their country. My story is partly dedicated to those who didn't survive physically and/or mentally serving at a time when bullying and bastardising was the model in the defence forces, along with an element of stoic indifference on behalf of the young recruits’ custodians, although not always. Furthermore, the world was on its own path to perdition at this critical time in our history.

*Mark has won a literary award in 2009 for his short story under the title ‘A New Life’ at the beginning of this book. Also, he has 2 previous non-fiction books published in Australia by Zeus Publications in 2006 and 2009.

Mark lives on the mid-north coast of New South Wales, Australia, with his partner Lisa. Having served in the Royal Australian Navy and as a holder of the Returned From Active Service badge, along with service in the public sector, rehabilitation and services, mature age student, restaurant owner, single father and salesman, Mark considered his background such that he could sit down and write a story, which he did with his first non-fiction tome, Inside Out: The Black Heart Of The Motor Trade, followed by Surviving Chronic Cretinism, published by Zeus Publications in 2006 and 2009. This is his third foray into the world of non-fiction with his, what could be described as a prequel to an anthology, although it does stand on its own.