The quick and easy way to Jumpstart you out of depression addiction, toxic relationships low self esteem and into finding your purpose and authentic self 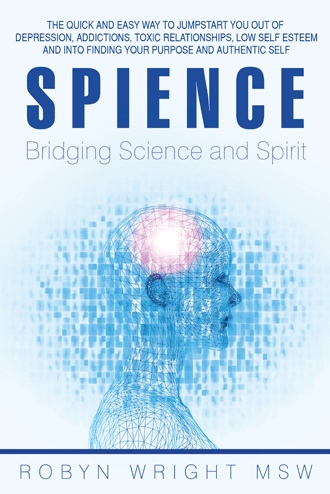 The exciting part of living in this rapidly expanding universe is watching science support many of the beliefs from spiritual writings. Take for example what scientists are saying about black holes. Specifically the edge of a black hole called the event horizon. Scientists purpose that a person who might come to the event horizon and fall into a black hole would be both dead and alive. How can that be they wondered? How can a persons’ body disintegrate in the black hole and still be alive? Stephen Hawking has come up with his theory to answer that question. He states that a person who goes into a black hole actually goes to another dimension. This may new information to the scientific world, but for spiritual people, this is easy to understand. It is commonly believed that the spirit is a separate entity and that this entity never dies. So a person whose body is destroyed will live on in a spiritual dimension .While not all spiritual people agree on where this place is where spirits hang out after death, it is generally understood that it is still somewhere. This illustrates how spirituality has known something for years and science is just coming to a similar understanding.

Unlock your potential by finding your authentic voice. Spience takes you on a path of finding answers for ways to care for your health and happiness using the disciplines of spirituality and science. Questions such as what it means to become the person you were meant to be will be discovered. We will look at ways to live your life from your authentic self. We will look at how scientific studies back up these spiritual practices. Spience will show you how to find that peaceful place that most of us only talk or dream about.

Marriage and family therapist for over twenty years. Received MSW. Certified master NLP practitioner and certified hypnotherapist. My approach to therapy is holistic and concentrates on the person’s whole life instead of just one area. I think therapy is about guiding you to your natural wisdom and concentrating on balancing all the areas of your life. You have all the resources you need to solve your
problems. It is my job to help you find your answers. I worked as a therapist in a holistic detox clinic that helped transform the lives of people that were addicted to street drugs, prescription drugs, alcohol and toxic lifestyles. I integrate my intuitive healing practice with my knowledge in alternative practices, NLP, and traditional modes of therapy to guide you to your own capabilities to achieve your goals and outcomes and reach your highest potential.
As a therapist and life coach, my approach is compassionate and encouraging. I am respectful of each person’s journey. My role is to guide you to your personal freedom and health. I believe that only you can heal yourself. I have personally done the emotional transformational work in my own life. My life is dedicated to personal transformation. I lived in Costa Rica and returned to California to be with family and grandchildren.