Love and Accept it All

A Journey from Near Death to Bliss 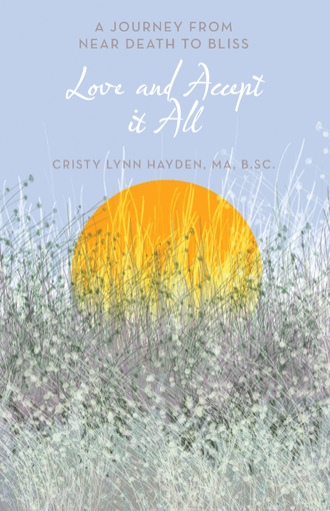 You might take for granted the simple things you do each day such as walking, talking, working, even smiling. Fifteen years ago I had the unthinkable experience of waking up from a coma, unable to do any of these things. The freedom of functioning independently had been stolen away from me in a split second.

At twenty-four years old I was fresh out of University and I felt confident to take on the life of a responsible adult. At the time, I believed I had endless possibilities open to me. I had just started my first real career job and was expecting my career and personal life to take off in ways that a young adult triumphantly expects life to do.

I was definitely taking things for granted . . . family and friends who were there for me without question; the great condo I had recently purchased; my newly framed Bachelor of Science degree; my new promising job with the provincial government; and also my health and fitness.

I spent a week in a coma following a severe car crash. A drunk driver had crossed the median and hit my car head on. In shock and despair, members from my family arrived at the hospital, soon after the crash, and were told I had suffered a severe traumatic brain injury. They were told I was unconscious and would remain so for an unknown amount of time.

It was also explained I had suffered a seizure while being transported to the hospital, which could complicate my recovery. The doctor chose to protect my family by not sharing the true severity of my injuries. We learned later that the doctor had measured my responsiveness using a Glascow Coma Scale. A patient’s eye, verbal, and motor responsiveness are tested to determine the severity of the brain injury. My coma scale score was extremely low. On a scale of being fully conscious (15) to near death (1), I was assessed at 3. If it were much lower, I would not be alive. The prognosis for my recovery was not good.

It is disturbing to consider what I went through when the car crash took place. My body was held in place by my seat belt, but my brain was launched like a basketball, bouncing against my skull many times as the cars collided. When medical staff arrived in the ambulance, they immediately inserted a ventilator through my mouth to ensure I kept breathing and received an adequate supply of oxygen.

Soon after, a Nasogastric (NG) tube was threaded through my nose to provide me with nutrition, and I was checked for other injuries such as broken bones. Medical staff checked for internal bleeding by inserting a tube into my abdomen, but internal bleeding was not discovered. Although I was badly bruised and had minor cuts, no other injuries were discovered, which meant the medical staff could place their full attention on monitoring my brain injury.

Cristy Lynn Hayden suffered a very severe brain injury as a result of a drunk driver crossing the median and hitting her car. Miraculously, she recovered fully from her brain injury and slowly created a life that has become more than she or anyone could have imagined. Join her journey and expect to be inspired to create your own blissful life.

Inside this book you will discover the true gift of:
Emerging from a coma,
Rehabilitation,
Recovering thanks to family and friends,
Dark times,
Emergence,
A new beginning,
A purposeful life,
Spiritual realization,
And a new understanding.

As a vibrant young adult, Cristy Hayden was involved in a severe car crash, resulting in her lying in a coma for a week. She awoke to learn that everything had changed: she couldn’t walk, she couldn’t talk, and she couldn’t return to the job she was dedicated to.

Miraculously, she recovered fully from her injuries. She has since run two half-marathons, competed in speech contests, presented at career development conferences, and completed a master’s degree.