A magical understanding of uncertainty 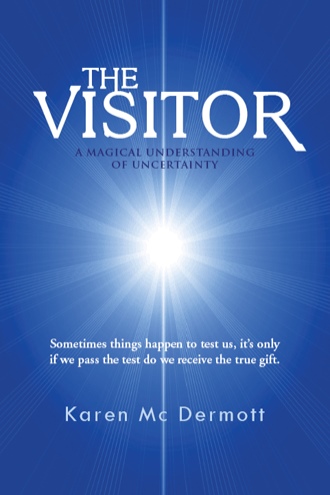 Chapter One The Meeting

I still do not know why I was given this role or what my boss has seen within me to think that I am the best person for the job. He must value my opinion highly to give me control of such a life changing responsibility. No pressure then!! My mates have started to call me ‘The Indian’ because I give a gift and then take it away. It’s alright for them though with their conventional ‘giving’ jobs. The name given to my job is ‘The Visitor’ definition of which is ‘a person or thing that enters into someone’s life for a short period of time’. I am just back after having a break between assignments, each one can take a lot out of me the pressure can be intense and from I start until I finish I never know what to expect.

Ah Jonnie has just text ‘Meetin 10 min boardroom’. So it’s time, I will now find out whom I will be spending the next few months with. I always feel nervous and a little uncomfortable at this point. So I must remember to make a stop at the loo on the way as the boss doesn’t like it if we need to leave the room and sometimes these meetings can go on for hours. At the last meeting Sydney had been out for a curry and a few glasses of wine the night before which were doing a conga in her lower intestines the whole way through the meeting, I remember looking at her, the sweat on her forehead and the greenness of her cheeks told a story in themselves. The poor girl was in pain, but I have to commend her she stuck it out till the end. We didn’t see her the rest of that afternoon and we usually hang out to make sure that we are all in zinc when the boss isn’t around.

Outside the boardroom door, we are all lined up in anticipation, as if we were waiting at the living room door to see what Santa has left for us. As we look in through the small window in the door I can only describe it as being spacious, bright and airy. The prominent colour is white, white walls, white table, big monstrous white fluffy chairs that we all sink into, it’s like lying on a giant cloud if I am honest, when you delve in it feels quite luxurious but they are quite awkward to get out of and as of yet I have not worked out why. It is all very strange as it is not somewhere that you would expect our Boss to have had an influence in designing but apparently it was his vision. Boss is quite loud and sharp; when he talks he has everyone’s attention. Quite a bulky, strong man not anything like me I could fit twice into his pants. He has the utmost respect from everyone, no-one has ever questioned his decisions as he has never faltered, I would trust him with my life and I suppose in a way I have.

We hear a loud “COME IN”. So we all enter and take our seats at the large white desk where awaiting us are assignment files. I am dying to take a peek but I decide to wait until it is time to read about the people I am going to encounter. I love meeting new people, delving into the soul of their lives to find their true being. What makes them tick? Do they know yet or are they to find out in the future? Human behaviour has always intrigued me.

Boss gives us all the usual spiel, starting afresh, forget the past assignments, fresh approach and all of the usual get in the zone focus stuff that helps us all build a brick wall between assignments. Then comes the moment we have all been sunk in our seats for “Well what are you all waiting for open your files, have a look and if you have any questions that I can help you with before the end of the meeting all the better if not you can take your time to look over them tonight and be at my office early because dispatch starts at 9 sharp. Got it?” says Boss.

We all agree at once “GOT IT”, whilst we all reach for our files.

On this assignment I have five different candidates to observe and I have five special gems assigned for me to pick up in the morning before I dispatch. They are not designed to last long but they will have an unimaginable effect on those who encounter them. Mind you it never seems to baffle me how everyone deals with these situations in their own unique way. I believe that over the thirty four years that I have had this role that I have seen it all, but hey maybe not. I never take things for granted, definitely not here anyway. Once my duty is done I am not allowed to interfere, I must then only observe for the immediate reaction and then report my findings to Boss and the others.

I am always asked how I can do my job. Well my answer to that is that someone has to do it and I feel that I do it properly by ensuring that although the gift I give is taken away there are only so many gifts to give and I help in the process of choosing the best candidates in each assignment group.

Scanning my files I see that my first candidate is a 30 year old blonde haired blue eyed woman. Her name is Carrie. As I look at her picture I see that her sparkle is hidden, still there but hidden behind a dark cloud. Her profile says that she had always lived life to the fullest until having her second child, which was when she was encouraged by her partner to give up work, give up her studying and focus on her family commitments. She has applied for a visa to move to the other side of the world away from her friends and family to focus on the family unit she is creating with her partner. All of this and she hasn’t considered having any more children I am intrigued to know why. Oh I see, about a year ago a traumatic home attack affected her quite badly and she suffered post-traumatic stress which she is still working towards over coming. I try not to judge others as it is by a combination of different circumstances that dramatic choices are made. A lot more to discover here I imagine.

Next is a 38 year old woman called Tracy, by the looks of her she has had a rough life and has let herself go somewhat. It is amazing how the pressures of life can really reflect on our appearance. She has brown short hair and is wearing jeans that are too tight for her creating a muffin top effect around her waist. Let’s see what her profile says, oh she has a medical condition which she has not discovered yet. It was a miracle sent to her that allowed her to conceive her son four years ago. She has been trying to have a second child since but to no avail and has had many miscarriages. She also takes care of her mum who is not as mobile as she once was, thus needing a lot of care. Her family has had their fair share of traumas which has led her to becoming a quite cautious and sometimes anxious. People perceive her as being negative and dull always feeling sorry for herself often vocalising her sadness over loosing another pregnancy. Some people can feel uncomfortable with this taboo subject and often avoid her thus leaving her with a feeling of isolation which only adds to the paranoia she quite often experiences, especially after a play group session.. But as I said before I do not judge, I will take the time encounter people for myself and understand the life time of circumstances that have brought them too this place in life where they now stand.

Oh the third candidate is a 22 year old model called Bethany. She is very beautiful with long brown locks that flow elegantly over her slender shoulders, her eyes are brown like the darkest mocha, but she is very skinny her bones can be seen piercing through her golden tanned skin. Her profile says that she has a boyfriend who is also famous, they both are regular party goers. Some in society have presumed that they are together to get more publicity as the paparazzi have followed their every move since it was revealed that they were dating as they are what people perceive to be a ‘perfect couple’, if there is such a thing!! She is Australian and he is American, what more does the world want, the American hunky actor and the Glamorous Australian beauty.

Sometimes things happen to test us, it’s only if we pass the test do we receive the true gift. The time has come for the visitor to arrive. When this happens it is a life changing event for those he encounters. Their lives have reached a turning point and with the watchful eye of the Visitor they will each recieve a gem. By passing the test comes the opportunity to recieve the true gift if they are fortunate enough. His journey with each of these five women leads him to not only change their lives but also his own.

“From all negative situations is the potential for a positive outcome”
Endorsements :
1. “I couldn’t stop reading, I got emotional at a few points, I loved the story, I love the twists” Sharyn,. Warrior Films
2. “‘The Visitor’ gave me the answer that my heart longed for.” Donna Di Lallo. .Adoptamum.com

Karen McDermott’s twin passions are being a mum to her four children and writing creatively, which provides her with the perfect avenue for self-expression and exploration. She is a regular writer for www.adoptamum.com. Karen has lived most of her life in Ireland, and she now lives in Australia with her family.