Encounters with the Kellys

A Plea for Freedom from Dan and Ned Kelly 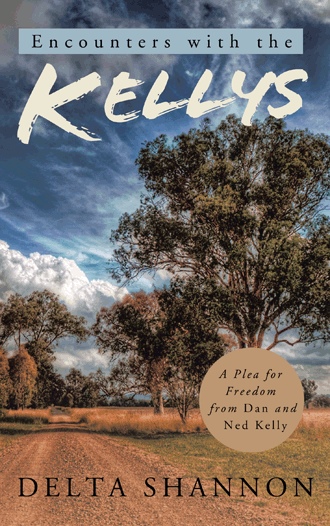 “I first met Dan Kelly in a museum gift shop …”

So begins Delta Shannon’s journey of discovery with Dan and Ned Kelly. For five years after that first meeting with Dan, her life would be consumed by the Kellys, as she channelled their spirits. Together, they now work to share this message, as well as the truth about the Siege at Glenrowan, with the public.

Dan and Ned Kelly speak here, to and through Shannon. They want people to know that their spirits are earthbound, that they are restless and angry, and that they no longer wish to be bound to this plane. Somewhat ironically, it is the iconization of their name and legacy (not to mention the merchandising of the Kelly name) that keep them from achieving peace, and they want it to stop.

The people of Australia can release Dan and Ned and allow them to go beyond the higher realms and heal their souls. In Encounters with the Kellys, Shannon lets the men share their side of the story and shares how modern-day readers can help these two trapped souls find rest.

Their message is clear: They are lost. They are in pain. They want to be free.

Delta Shannon is a spiritual medium (through no choice of her own) and a member of the Australian Psychics’ Association. She has been giving professional readings since 2001, but has been in contact with spirits since childhood.