The Day I Became a Superhero

A true story of a seven-year-old girl who experienced a superhuman power following a fatal car crash. 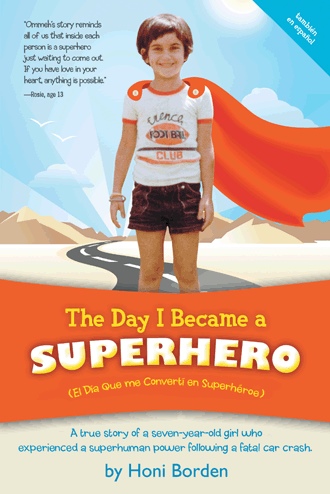 “What a strange dream!" Ommeh said to herself when she woke up the morning before the big trip. "Hmmm. I wonder if I should tell mom?" Seven and a half year old Ommeh had spent the night at her cousin's house with her parents in the city of Esfahan, the third largest city in the country of Iran. They were on their way to Shiraz to see the ancient ruins of Persepolis. Ommeh was feeing so happy and she could hardly contain herself. Her dream of visiting one of the oldest civilizations in the world, the one her mother, Zaman, had shared stories of, was finally coming true. For a long time, Ommeh had created drawings that depicted the temples, pillars and the carvings of the lion and the other figures related to the ruins. There was something so fascinating about the ruins in Shiraz that Ommeh had a strong desire to see them. Although she had been anticipating the trip for a long time, for some reason, something did not seem right that morning, especially after the strange dream she had.


In The Day I Became a Superhero, seven-year-old Ommeh faces the toughest day in her life during a fatal car crash with her parents. She is alone and frightened at first, but something miraculous happens when she gets in touch with her inner superhero and her life is changed forever.


“I find [this] story raw, real and very inspirational. It’s relevant for both adults and young children—for us to realize our amazing potential and the miracles we are capable of achieving. It’s easy to focus on all of our flaws but what this story reminds us of is our true essence; when we can tap into it, it’s unbelievably powerful. And that essence is within us—we just have to allow it to manifest.” —Prea Gulati, PhD Assistant Research Professor, Department of Global Health, George Washington University


“It made me feel interested, surprised, and empowered, and I recommend all
kids and adults to read it. I felt like I could do the same for my parents if I am
in a situation like this.” —Gabe, age 9

Honi Borden (Ommehoni Motarefi-Borden) is an Author, Speaker and an Intuitive Healer guiding individuals to their own inner light and superpower. Honi facilitates The Reconnections and Reconnective Healings. She is also a Holistic Eco-Beauty Expert and creator of Holeco Life and Holeco Girls, eco-conscious lifestyle products. Honi resides in Maryland with her husband, Karl and her two boys, Kiyan and Nevan, whom she believes are the true teachers in her life. To learn more about Honi, please visit: www.HoniBorden.com