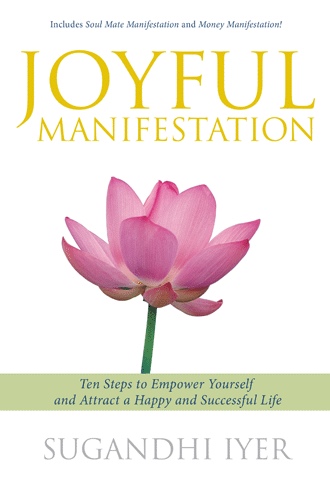 “And I remove anything in me that comes between me and my creations.”

After feeling good about yourself through the process of self-empowerment, it is essential to remove the blocks to Joyful Manifestation, which are in the form of your personality issues. If left there, or built up on, these blocks will sabotage the successful manifestation of your life areas.

To remove them it is first important to become aware of them. When I say become aware, I do not mean the same thing as ‘focus on’. You can be aware of something and know that it could be a possible pitfall for you, but you don’t have to focus on it and make it your whole truth. Many times just being aware of the issue lays the road for rectification.

For example, if you are a woman afraid that her man is going to find someone younger and more attractive, your enemy is not that younger so-called more attractive person, but your thoughts about yourself. If you are in this position, then read up on Step Four again and get empowered. Since everything in this world is true and yet nothing is true, you can make it whatever you want. To explain this further, you can either think that “Yes, this world is full of young and beautiful women ready to take away my guy”, or you can think that “I am the most beautiful and perfect of them all.” It’s your choice; what do you want to think? What is it that serves you? Once you start this process of thinking that you are the best, then even if temporarily you are proven wrong, you will soon be proven right. You will see that you are the most beautiful of them all and so are the natural choice for your guy. Beauty can mean so much more than just pure physical looks; the shape of the body and the color of hair. In fact, the body shape that you have may really be wonderful for all you know. Who is say what the right standard for beauty is? It keeps on changing. So really the obstacles are always within you to remove, but you must first become aware of their existence so that you can remove them.

What are the common obstacles that hurt the successful manifestation of situations?

2. Past experiences and karmic imprints

3. Inability of the mind to perceive

9. Lack of confidence in ability

10. Inability to stay in the now

Each person is born with a basic nature. This basic nature is made up of tendencies to do certain acts, think in certain patterns, say certain things, and react in certain ways.

There are several factors that contribute to this basic nature— birth and genes, family and social conditions, upbringing, gender, race, and individual and mass experiences. All of this contributes to the creation of your personality.

Every species has a basic nature; plants, animals, minerals, etc., all have basic natures and tendencies and they act according to this nature. This nature is given to them by God as it is a part of his creation plan that things act according to their nature. Mountains are supposed to act like mountains and not move around freely. Wouldn’t it be something if mountains decided to start walking around, or at the least start sliding around intentionally?

From the variety of species present today on Earth, man is known to be the only one that can most consciously bring about a great change in his environment and in his own nature by virtue of his understanding and will to do and achieve things. To consciously contemplate and make choices is something that mankind can do. All species have their own intelligence to perform their survival tasks adequately, but humans are endowed with an extra ability to stand still (when the mind is calm), think, and make educated decisions. Conscious processing allows mankind to progress well.

While each species has a basic nature, within that so does each individual. A person’s basic nature normally dictates what he will do in a situation, and while it may work for him sometimes, it may not always work for him. Even as he may try to control his behavior and actions, when faced with similar conditions, his reactions would probably be the same. The key lies in changing his nature to the extent that it works for him. When a person can sit still, think, and make a conscious change, he removes one of his biggest obstacles to Joyful Manifestation, which is acting in self-defeating patterns.

A very simple example is of a couple that wants a good marriage but keeps reacting to each other in the same negative way. How will they reach Joyful Manifestation unless at least one of them can sit still, think, and decide to change his or her basic nature?

Observe your reactions to situations and ask that your basic nature changes so as to enable you to respond efficiently in a way that makes the situation, rather than breaks it. It is never too late to do something that will further reinforce your becoming a Master Manifester rather than a Master Unmanifester.

“I allow my basic nature to work to my advantage. I allow change that is useful to me.”

If something is not working for you, there is no harm in allowing winds of change in. Don’t hold on to that which is no longer required by you.

You too can become part of this select group of people because you already hold in your hands the deep knowledge of the masters that unlocks the doors to success. This knowledge is presented to you in Joyful Manifestation in a way that will help you change your life. The magic begins even as you turn the first page, because as you read, your consciousness changes and gets ready to attract what it really wants. All your experiences, likes, and dislikes have brought you to where you are now. Your Self wants you to align with your true nature, which is joy, and have your desires fulfilled from that space. This book will show you how, with its detailed, ten-step process that easily guides you to that special place where what you want finally becomes yours to enjoy. You can attract money, love, good health, and the type of career you want. Find out how to work with energy to attract abundance. New researched information on soul mate and money manifestation is included. Your journey of Joyful Manifestation begins now.

Sugandhi Iyer has spent many years researching how to get people to be happy and successful in their lives. She has studied many courses, read books, and spent time in contemplation in the process of developing herself to become the perfect tool to bring out a book that combines old and new information from the East and the West. She is a success coach, currently living in California, helping people change their lives. More information about Sugandhi can be found on www.SugandhiIyer.com.