I Witness News. I Witness Miracles: A Reporter's Notebook

Good things are happening in your life every day. Learn how to open your eyes and your heart to a happier way of life. 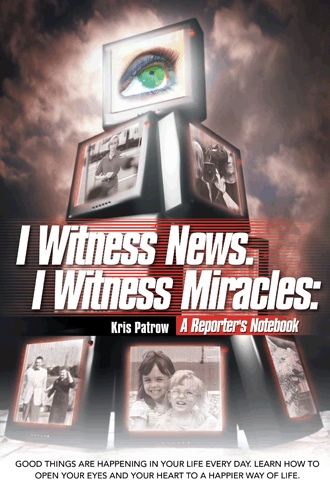 When I grow up I want to be… “A television news reporter. “ I can’t count how many times I said that. So many times that when I finally did land my dream job in news my mother simply said “THANK GOD!“ so she wouldn’t have to hear about it anymore. And I loved it. I loved writing. I loved the excitement of being right where the news was when it was happening. I traveled the world and I got to meet famous people. And I got to be on TV. Which I have to admit is pretty cool. Unless you’re standing outside in -50o weather telling people they shouldn’t go outside. Then you just feel like an idiot. Anyway, not long into my career it started to bother me that the only news we seemed to tell was BAD news. Even if something good was going on behind the scenes in the same story. Like the tow-truck driver who helped pull his neighbors’ cars and tractors from the rubble after a tornado, even though his home and all of his belongings were destroyed. Wouldn’t you want to hear about something like that? The news consultants said you didn’t; that good news wouldn’t “sell.” Not to mention that a reporter who admitted to “seeing miracles” would probably find her next career move to some “bureau” in Montana. So I sat on my secret until, well…until I got out of news and got the balls (so to speak) to share it with the world. So… I see miracles. There. I said it. And no, this isn’t about seeing the Virgin Mary on a grilled cheese sandwich. Although that was pretty cool. And it’s not like that kid in the movie “The Sixth Sense," who says, "I see dead people." It's not like that. I don't have any special powers and I don't hear voices and I don't even go to church. In fact, my life has been just as screwed up as the next person's (maybe more so in some ways, being a TV news reporter). That's why I think it's important to tell people that someone like me, someone like you, CAN see, and experience, miracles.

There’s good news and bad news.
The bad news is, well … there is a lot of bad news out there. At least if you’re getting it from TV. Eighty-three percent of Americans believe that television news is the most negative, compared to newspapers, radio, and the Internet (The Wirthlin Report, Feb. ‘04). Author Kris Patrow admits it’s partly her fault. For nearly twenty years she was bringing it into their living rooms as a television news anchor and reporter. Bad news was her job.

The good news is, that’s not the whole story. It never was. And Kris is on a mission to prove it. I Witness News. I Witness Miracles: A Reporter’s Notebook is step one of that mission: from reporting the countless “good news” stories that never made air, to pointing out the good things that happen in everyday life; things that many people have forgotten how to see in this gloom-and-doom world painted by the media.

At a time when television news has many of us closing our doors and eyeing each other with suspicion, I Witness News. I Witness Miracles: A Reporter’s Notebook reports stories that will help people see each other and the world in a new, more compassionate way and see miracles so common, they re-thread the needle connecting us to one another.

Ask Kris Patrow to describe herself and she’ll say, “I am a reporter of miracles.” Her many years as an award-winning television news reporter inspired her to begin writing this, the ultimate “newscast,” one filled the many behind-the-scenes miracles that never made air and the many daily miracles we’re all witness to, but have forgotten how to “see.” She hopes this and future “newscasts” will help people remember how to see and experience the many miracles in their own lives.

In 2001, Patrow married her soul mate, fellow news hound and miracle-seer, photographer Dave Ogle. They live near St. Paul, Minnesota with Dave’s son, Ryan; their daughters, Sam and Alex; and one crazy cat named Cookie, each of whom inspires her to keep looking for and writing about miracles in the everyday.