by Debbie Belmessieri & With Mary Morrissey 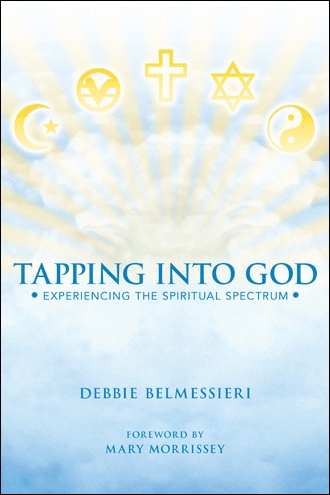 Exactly what does connection to God look like in our daily lives? Tapping Into God: Experiencing the Spiritual Spectrum answers that question by providing a unique look at many faiths and spiritual practices within our human family. Twenty-eight authors have defined a relationship to the God of their understanding through their individual perspectives, using a variety of approaches and styles.
Weaving a rich, heartfelt tapestry of personal connection and devotion, Tapping Into God will touch your soul and open your eyes to the abundant spiritual diversity of our planet. These stories illuminate the wonder of that indefinable power that fashions our world. Even the non-believer will find ample food for thought within these pages. Nurture your spirit as you experience the spiritual spectrum through Tapping Into God.

As a spiritual seeker, Debbie Belmessieri was eager to combine her passion for writing with the inspirational idea that has become Tapping Into God. Debbie’s commitment to personal growth led her to start her own business several years ago and she recently launched her second business, DivaliciousStyles.com, a website celebrating women. She lives in San Jose, California with her daughter Michelle.