A Law of Attraction Story for Teens 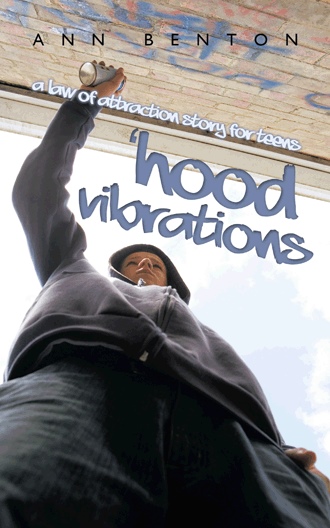 CHAPTER ONE – "THE DRIVE-BY"

Though it is bright out under the streetlight, from where Silas Brown watches from deep in the shadows of the abandoned warehouse, he is invisible. Second Avenue is like that as it runs through the inner city – a nest of abandoned buildings and homes, many of them pressed into service as crack houses. Their own gang house, two blocks over on West Fourth, is just such a place.

Silas is the lookout for the gang, the Southside Seminoles, and it is an important job. Earlier that evening, their leader, Madrid, told him, "Look alive, boy. You got our backs. Don't want nothin' to catch us blindside. Be hell to pay, hear me? Keep yo' peepers peeled."

There is an abandoned furniture factory across the street, and their gang graffiti covers much of the red-brick wall. The artwork, most of it in their gang colors of burgundy and tan, is a mural of one and two-fingered hand signs and handguns; of the faces of gang leaders and important events in gang history, like the gunfight with the Saracens in Southside Park last year. That cost them three of their best brothers. The image of their former leader and founder, Bandy, stares out through prison bars.

Some of the art is so fresh, the paint glistens under the streetlight.

Fresher still, though, are the gray dots of nine-millimeter, machine gun fire that deface Madrid's handiwork. There would be hell to pay for that – payback for the diss, the disrespect, for the violation of their turf.

Silas shivers and looks fearfully behind him. Lookout is also a dangerous job as any number of people, mostly his family and friends, told him. People like his mother, who knows what he is doing and alternately cries and threatens him. She calls him names, “stupid boy,” and reminds him of what happened to his cousin, Maurice, on the other side of town.

Maurice took a bullet in the spine and lives in a wheelchair now. Once the best point guard at Martin Luther King Middle School, these days Maurice plays basketball for the Paralympics, and wears a diaper in case – in the excitement of a fast break – he pees his pants.

But thinking of his mother shames Silas. He is supposed to be a man now. Though he is only twelve, he was given a man's job to do.

The squeal of tires brings him out of his daydream – the shriek of a car cornering too fast. It gives way to the roar of a racing engine. But the sound is far away, far down Second Avenue. He listens hard, listens till his ears chirp, but does not hear it again. He hears only the thump, the bass line, of a rap song coming from an apartment in the projects two blocks over.

After a moment, Silas takes a step out onto the sidewalk and looks down the dark street. He stares into the darkness till his eyes tear up. But the way is clear as far as he can see. Just purplish pools of streetlight at each intersection.

Silas is still in the open when the shot comes. He sees the flash in the black box of a broken window across the street. There is the shock like being punched. He is down on his back before he knows it.

He touches his shoulder and his hand comes away wet. Under the streetlight, the blood looks almost black.

I'm shot, he thinks, not believing it. I've been shot.

Gunfire is returned, raking the building. It is answered by more of the same from the black hole of the window.

A yell comes from inside the building, and the gunfire stops.

Still on his back, Silas hears the sound of sneaker-shod feet running toward him, squeaking, and suddenly the whole gang is over him, blocking the streetlights.

Someone, Jermaine, is on the cell phone calling it in. "Yeh, I wanna report a shootin’. Second Avenue at the old furniture factory. Yeh, somebody shot. Be a bro’. Bleedin' bad. Get here quick!"

And now Madrid is over him. He has a white tee shirt and he presses it to Silas's shoulder. As he does, the pain rocks him.

"Hold it there, Silas." he tells him. "Press it tight! Ambulance comin’."

And right on cue, Silas hears a siren, still faraway, but closing fast, louder, echoing down the canyon of brick and concrete.

When it is just a block away, the gang stands.

"Gotta go," Madrid tells him, looking down. "Be a three-time loser if they catch me here. You took one for us, Silas. Won't forget it."

With that, they are gone, shoes squeaking. Silas turns to look after them, and the motion brings another wave of pain. With a groan, he passes out.

Negative attention is better than no attention, Silas has learned. He ends up in after-school detention before the first week of school is over, on multiple counts – disrupting class, cheating, not turning in homework, smoking on school grounds, bullying, and fighting. His father told Silas before he left that he would “never amount to no good.” Silas seems out to prove him right.

In ‘HOOD VIBRATIONS, a new science teacher introduces the universal Law of Attraction to Silas and gives him an assignment that just might change his life from living in the poverty of the ghetto to living in a world of prosperity and possibilities, limited only by his imagination. Can he do it? Can he make it out of the ‘hood using the power of his mind? Read the story, try the experiment for yourself, and reap the rewards of your “good vibrations.” Enjoy, and tell me what you think. Go to: www.LawOfAttractionJr.com

After 50 years of limiting beliefs in lack and limitation, Ann has used her new knowledge of the Law of Attraction to move from poverty, ill-health, and strained relationships to abundance in all. She now lives in the Ozark mountains with her teenage daughter, Inga. This is Ann’s first novel.