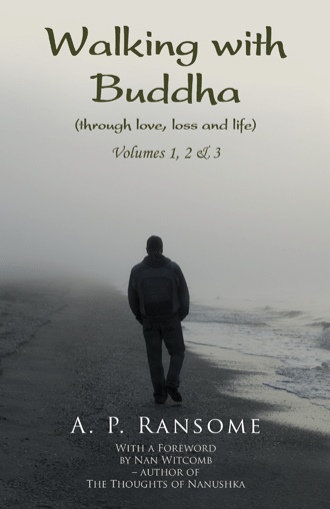 On September 11, 2001, A. P. Ransome watched in horror as the Twin Towers fell in New York. It was nearly more than he could bear to witness.

Just three days earlier, his brother collapsed at his mother’s home. A.P. rushed to his brother’s aid but didn’t understand why a loving God would allow his brother to die. Despite the best efforts of the emergency responders, his brother passed away that day.

Left with the painful task to write his brother’s eulogy, the realization that America was under attack was devastating.

His grief was debilitating and life-changing. His friends and family advised him to get help, but he was lost. His role had always been to provide advice to others; how could he now be the one without answers? Wracked with fear, he struggled for meaning. Walking with Buddha was born of a grieving brother’s attempt to understand the journey of those left behind.

This book of poetry and prose is part of his journey, filled with inspiration about life, emotions, contemplations, and philosophy. Through these words, the author hopes to inspire others who grieve and wonder. May your Buddha be there for you, to hold your hand and guide you to that which your soul desires.

When all appears lost, may you find the strength and love to recover from the unthinkable.

May you be at peace with the world and with yourself.

A. P. Ransome stays active in his community through his work with Schools in Business and Speakers in Schools, two not-for-profit organizations. He has travelled extensively and now lives with his family in Stirling, a community known for its English village atmosphere in the Adelaide Hills, South Australia.