Married to the Franchise

Living a Championship Life of Partnership

by Jonathan A. Carroll 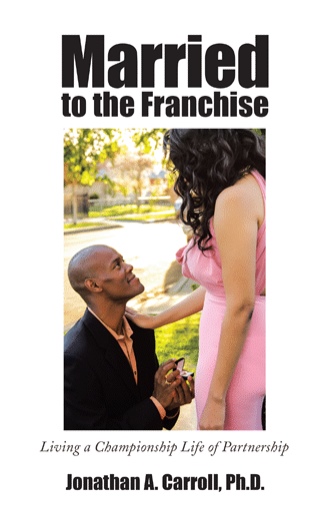 When I first met Nkechi Okoro at the University of Pennsylvania Freshman Convocation in the Fall of 1995, I was immediately taken by her British accent and the fact that she stood nearly eye-to-eye with me at 5"11' and 3/4 (I still contend she's over 6ft). I was knowledgeable enough to know that there were Black women all over the world who sported accents of all kinds, but Nkechi was the first with whom I had the chance to converse, and hear utter my name. The height/accent combo instantly made her a "Person of Interest", someone to follow up with as I surveyed the full female scene at the official beginning of the school year. Fast forward a couple of weeks, and I again encountered Miss Okoro. This time I sat in the audience as she performed in a collection of one-act performances organized by the African-American Arts Alliance (4A). On this night, high-heeled shoes easily bumped Nkechi’s height to 6’2”, which would intimidate some, but not I. She had on her A-game makeup and form fitting clothing, which accentuated all the curves that would make any man snap to attention. So now I was even more interested than our first meeting at Convocation. After only two encounters and knowing little about her beyond her physical profile, I placed Nkechi Okoro into the "Wife-piece" category. Later in my college years women in this category would be dubbed "Franchise Players". Little did I know as I watched those one acts just how correct I was about Miss Okoro. As we enter our tenth year of marriage, I feel it's an appropriate time to share what I've learned about partnering with such a remarkable woman and maintaining a happy marriage. The Mrs. and I often receive compliments about how "easy" we seem to make Team Carroll, or how well we seem to complement each other, and it is worth explaining how we make our partnership work. The notion of marriage is changing in this country and the essential questions should not center solely around whether or not marriage is still relevant or if we are meant to have just one marriage, but should also include questions about the ways to keep marriages healthy and thriving that are not simply based in satisfying physical needs. Diving into the newsstand magazine article about "10 Ways To Lick Her Until She Screams" or "The Position That Will Have Him Calling Your Name" just will not get it done. In addition, the dialogue on marriage needs to have input from men, because we do play a small, yet important role in the marriage equation. I've been blessed to have peers and mentors in my life who have also been successful in keeping their marriages strong while pursuing professions and raising children. My goal is to offer up narratives of how men do this as a counter to the popular perception that we are too afraid to commit to marriage, reluctant to be emotional in our relationships, and too insecure to be with women who bring equal if not greater assets to the table.

Jonathan Carroll married Nkechi Okoro when he was twenty-five years old, after an eighteen-month courtship. He knew that Nkechi was a “franchise player” who would lead him to a championship life from the moment they first met in college five years earlier. More than ten years after saying “I do,” she has more than delivered. In modern society, Jonathan and Nkechi’s relationship and rise into a marriage of champions seems like a rare occurrence. However, the truth is that there are similar couples from all walks of life who manage to maintain a committed bond while striving to be the best they can be. Married to the Franchise chronicles both Jonathan’s road to being in a position as a “relationship owner” where he could partner with a woman of Nkechi’s caliber, as well as the journeys of other men who found franchise players with whom to share a life. It explores the ways that these couples manage to keep walking side by side through financial ups and downs, career changes, and family expansion.

Jonathan A. Carroll is an educator in every sense of the word. He earned a Doctorate in Education from the University of California Los Angeles (UCLA) in 2011. He has used his background in education and ten years as a husband to reflect on the key ingredients to a successful marriage. He has counseled numerous friends and couples through their matrimonial challenges to help keep them on a path to successful partnership. Dr. Carroll lives in the Los Angeles area with his beautiful family.