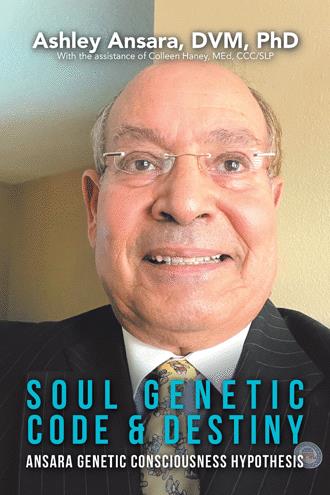 After many decades of life experiences that include living in three continents, Dr. Ashley Ansara has come to the realization that humankind should always be willing to seek knowledge, expand ourselves, be receptive to change, and trust our souls to guide us through this life. In Soul Genetic Code, Dr. Ansara shares a new logical hypothesis created from Egyptian belief systems to explain the dynamics of God’s relationship to humankind, the universal consciousness, and the humankind psychological consciousness (the mind, emotions, and free will to determine one’s destiny) to lead students of life to reconnect to their living souls and become more peaceful, loving, wise, and joyful in the world. Through insights shared to prompt the mind to question, the heart to vibrate, and an energetic movement toward the living soul’s truth, others will learn about energy and medicine; the concept of life essence and soul kinetics; the origin, biology, and DNA of the soul; the living soul in ancient Egypt, and much more. The hypothesis provides compelling evidence to accept the fact that genetic dictate our destiny. Environmental factors only put us where do we want to be but never determine where we end up with through life and the outcome of being alive on this earth. Soul Genetic Code offers an innovative, logical hypothesis derived from Egyptian belief systems to guide others on a journey of self-discovery to find their living soul’s truth and formalize their destiny

The author has more than forty years of life experience infused with science, academic teaching, medical research, veterinary medicine, spirituality, and interacting with many people from different cultures and religious beliefs. The interaction between the author and his assistant, who do not always agree, presents an interesting background to provide a unique and meaningful stage for the readers about the epigenetics of the soul. Dr. Ansara was born in Egypt, attended traditional veterinary medical school in Egypt, and immigrated to the United States in 1973 to attend Michigan State University, where he obtained his master’s in microbiology and public health and his doctorate in microbiology and poultry science. Dr. Ansara holds employment positions at North Carolina State University, the US Department of Agriculture, and BioVet Vaccine Manufacturer in Egypt. Currently he is the founder and president of Regency Holding, an investment real-estate company that was established in 2001 in the state of Florida. Dr. Ansara received several political awards from the Republican Party such as the Republican Gold Medal from the National Republican Committee in 2003, the Ronald Regan Republican Gold Medal from the NRCC in 2005, the Outstanding Meritorious Service Award from the NRCC in 2006, and the Congressional Medal from the Business Advisory Council of Distinction of the NCRR in 2008. Dr. Ansara is a frequent contributor to several media outlets such as the BBC, Russian TV, Fox News, Al-Jazeera, CBC-Extra (Egypt), I-24 (Israel), Macan TV (Israel), Nile TV (Egypt), al-Fadaia (Egypt), France-24 TV, Kurdistan News, Iraqi Al-Ahad TV, Al Sharq (Turkey), and News Iraqi. Dr. Ansara has a strong record of accomplishments in civic societies and American political grassroots organizations, and he is a champion of human rights. The Ansara family, in conjunction with the City of Altamonte Springs, Florida, started the Ansara Family Scholarship Fund in 2012 to encourage high school graduates from the STEM program with little income to attend universities.