A Doctor’s Journey to Speak Truth and Be Bold 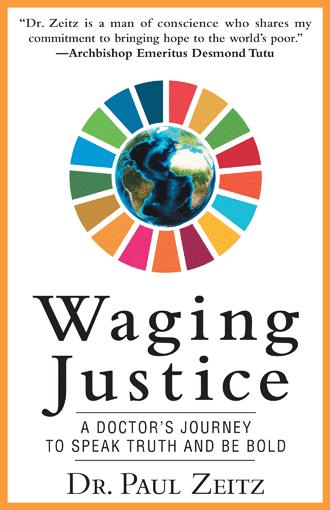 Mom wanted another child after my sister, Marci, was born. Dad was ready to stop trying, but Mom was determined. Her persistence paid off and three years later, on May 17, 1962, I was born in Northeast Philadelphia, the second child and only son of Sandy and Mark Zeitz. Eager to be part of this world, I arrived about a month before my due date. We lived in a small, recently constructed twin rowhouse in a burgeoning multi-ethnic neighborhood. My earliest memory is of a day when I was about two years old. I was outside and saw Mom was the passenger seat of a car pulling out of our driveway. I was panicked and confused, because I didn’t know where she was going. I started running down the block after her as fast as my toddler legs could carry me, past a dozen rowhomes, until I finally tripped on a crack in the sidewalk and fell flat on my face. My two front teeth lay on the concrete, their tiny baby roots still attached. Bloodied and terrified, I watched the car carrying Mom turn the corner and vanish. A stranger rushed to my side, and then my mom’s mother, Grandma Rose, who was watching me, came running down the block. Mom never saw me fall. A rushed trip to the dentist turned out to be futile, as we were told that my two front teeth couldn’t be reattached. I lived with an embarrassing gap until I was eight years old and my adult teeth mercifully arrived. Seven years later, I ended up with a minor speech impediment and a mouthful of expensive braces. My parents were in the Philly cheesesteak and hoagie business. By the time I was born, they owned two shops in Northeast Philadelphia, both called Mark’s Luncheonette, named after Dad, though everyone called him Mickey. My parents worked long, hard hours, coming home at night wearing the overwhelmingly pungent smell of fried onions. Grandma Freda, my father’s mother, lived directly above one shop, so Marci and I would spend weekends at her place while my parents worked downstairs. Her husband, Pop-Pop Ben, was in a nursing home, suffering from end-stage diabetes. His legs had been amputated and he was in a vegetative state. I never recall meeting him. Dad rarely visited him, and when we did, Mom, Marci, and I waited in the car while Dad went inside for a little while. Dad inherited his first hoagie shop from his parents and bought the second one in partnership with his older brother. But the second Mark’s Luncheonette failed when I was very young. Something bad must have happened, because my father and his brother didn’t talk to each other for more than twenty years. There were other mysteries. When Mom was only four years old, her mother and father separated, then later divorced. I met Pop-Pop Marty for the first time when he unexpectedly showed up on our doorstep. Mom hovered nervously as I watched this unfamiliar man wander through the house, talking to the pictures on our living room wall. Marci ran to her room in fear, but I was more curious. I stayed close to Mom, trying to figure out what was going on. Mom served him lunch, and we tried to make sense of his mumblings. Later, Mom told me that Pop-Pop Marty had been hospitalized several times for severe schizophrenia. He probably had other mental illnesses, too, but had somehow escaped permanent institutionalization. Pop-Pop Marty spent his days selling Philly soft pretzels at the stadium, and his nights sleeping in a halfway house on Erie Avenue. Marci was always my greatest friend. Three-and-a-half years older than me, she cared for me, made my bed for me, and played with me. I was her living doll whom she spoiled endlessly. On Saturday mornings, we would throw a blanket on the carpet in front of the small black-and-white TV. When we got bored with cartoons, we played “Boat” or “House.” When Marci played with her friends, I was the tag-along little brother. But I was a shy little boy and usually preferred to stay at home, reading or watching one of the handful of TV stations we received via the VHF antenna on the roof—often reruns of Gilligan’s Island and The Lone Ranger. Cartoons like Scooby-Doo and Dennis the Menace were my favorites. Mom wanted me to be more social, so she became a Cub Scout den mother. For a while, groups of blue-uniformed boys would tromp into our home once a week, but that didn’t last long. I never enjoyed the group activities. I felt more comfortable being a quiet observer, hanging out with Marci. My father, an avid fisherman, owned a series of mid-size fishing boats, named Mammy I, Mammy II, Mammy III, and so on. The family often went on fishing trips to the Delaware River, the Jersey Shore, and the Chesapeake Bay, but I never liked fishing as a kid. I was terrified of the deep water and thought the fish guts and scales were gross. I even hated the taste of fish. But my dad always seemed happier and freer on the water. On land, he was a more volatile and angry man.

Waging Justice is a memoir by Dr. Paul Zeitz, forthcoming by Balboa Press in September 2018. In unflinching prose, Dr. Zeitz shares a lifetime of struggles and hard-won lessons as a doctor, activist, father, and son. His complex dance between healing others and healing himself ultimately transforms the inexplicable anger and disappointment he felt at the state of the world and his own past into full throttled, open-hearted, soul-satisfying action set on a global stage. Waging Justice is a personal story and also a universal one: a story of action, of courage, and of forgiveness; and a rallying cry to wage justice in our lives, speak the truth, be bold, and take action in the world today. Twitter: @paulzeitz | Facebook: @drpaulzeitz website: https://www.drpaulzeitz.org/ For me, justice is the path to peace! Kirkus Review: https://www.kirkusreviews.com/book-reviews/paul-zeitz/waging-justice/

Dr. Paul Zeitz is a physician, an epidemiologist, and a tenacious, energetic, award-winning advocate for global justice and human rights. He has dedicated his career to catalyzing large-scale global impact. He serves as the co-founder of SDG Compacts and the Sustainable Development Games at the Global Development Incubator and the U.S.A. Focal Point for Action for Sustainable Development, a global social movement. He is married to his wife of twenty-seven years, Mindi Cohen, and they are the proud parents of Cletus, Lian, Yonah, Emet, and Uriel.