The Art of Becoming

Quantum Leaping into Your Future Self 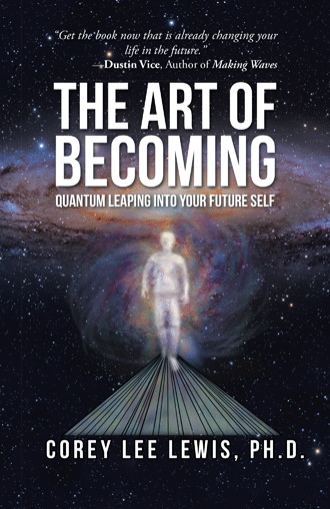 In this amazing combination, part epic tale and part instruction manual, Dr. Corey Lee Lewis, a Mind-Body Master, takes you on a journey through time. The Art of Becoming describes the process Dr. Lewis developed of quantum leaping into the future and returning to the present. In this one-of-a-kind-book you will be taken with the author as he leaps twenty years into the future to learn from his future self. When the story opens, author Corey Lewis has just begun this process of quantum leaping after having been devastated by divorce, the death of his brother from cancer and the death of his best friend from a drug overdose. Feeling lost and broken and in desperate need of healing, the younger Corey finds the direction and guidance he needs from his older self. As the author learns to maintain deep hypnotic states and transform how he thinks, feels and acts with techniques from a wide variety of disciplines, you will gain these skills also. You will learn about the Universal Laws of Attraction, Equilibrium, Change, Resistance and Persistence and how to apply them to your life in order to Be, Do and Have anything you want. You will learn techniques from Neuro-Linguistic Programming, Hypnotherapy, Biofeedback, the Silva Method, and Cognitive Psychology for breaking bad habits, releasing fear and anger, building motivation and self-confidence, reducing physical and emotional pain, speeding healing, improving memory and sleep, and more, much more. Spiritual Warriors of every kind, Seekers and Thinkers, Philosophers and Adventurers, all are invited to leap into the journey of a life-time—down the rabbit hole and into— The Art of Becoming

Dr. Corey Lewis is a former professor of English and founder of MindBody Mastery Coaching. He is also a Tae Kwon Do master, holding a seventh-dan black belt, and a licensed master practitioner of neuro-linguistic programming and hypnotherapy. As a life coach, author, and speaker, Dr. Lewis has helped countless numbers of people to transform their personal and professional lives and become the person of their dreams. He lives in the heart of the Redwood country of northern California with his partner Jessica and his two sons, Hunter and Bodie, and step-daughters Jaida and Ramona, and is the owner of Sun Yi’s Academy of Tae Kwon Do in Arcata.