A Non-Believer on the Camino 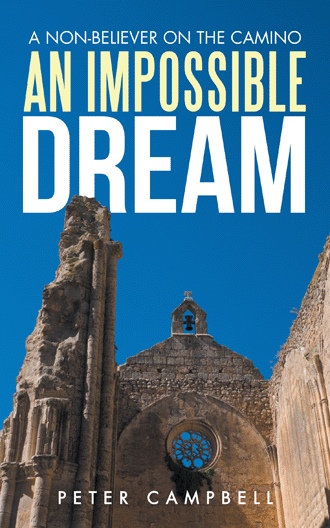 We head out of Castojeriz around 8 am, into the lovely pre-dawn light. It is a stunningly beautiful day. The sun is trying to peep through the clouds behind Castrojeriz’s castillo. Golden rays strike out across the landscape and up to the top of the meseta. The valley is swathed in a light fog, and we can see our track winding its way of into the distance and then snaking up the hill to the Alto de Mostelares, about three kilometres away and 150 metres higher than where we are. A procession of little two-legged ants of all colours are making their way along said path. We walk the 500 metres or so to the edge of town, and just as we set out on the path to the Alto de Mostelares I put my foot down and an intense shooting pain flies all the way up my leg. My heart sinks, to the very lowest point. I am filled with dread. Is this the end of my walk? Should I bus to León immediately and seek medical help? What about Janet; will she go on by herself? Will she be OK on her own? Is this the end of her walk too? How will I deal with having failed? What will people think? On and on and on the questions and negative thoughts go. Wisely or unwisely, I decided to try to go just a little bit further. At this point either the effects of the anti-inflammatory pill that I'd popped from Janet's secret stash cut in, or some other physiological or psychological change occurred, but within 20 steps and a couple of minutes, the pain subsides to an annoying but dull ache, which is where it stays all day. Phew, that was a close call. Seemingly miraculously, only three quarters of an hour later we are standing at the rest point at the top of Alto de Mostelares. The vista below is full of beauty. Castrojeriz and its castillo can just be seen through the mottled light. It was a steep climb to this point, and although only 150 metres in altitude from the low point when we crossed the Río Odra U Odrilla a short distance out of Castojeriz, it was a good effort with the way that my leg is feeling. I am pleased to have made it to the top.

We live in disturbed times. Seemingly more now than at any time in the previous five decades, the planet appears riven. Against this troubling global background, An Impossible Dream traces author Peter Campbell’s six-week, eight-hundred-kilometre long walk along the Camino de Santiago across northern Spain, capturing what he saw and what he felt during the journey.

Using the Camino as a backdrop, Campbell looks back at the cultural and religious conflicts of the Iberian Peninsula in the Middle Ages, and he reflects on the history of the Crusades, the Knights Templar, the legendary El Cid, and much more, drawing comparisons between now and times past.

Through vivid descriptions and introspective reflection, An Impossible Dream portrays the physical, emotional, and psychological challenges Campbell faced as he undertook this epic walk, the relationships formed along the way, and the spiritual questions asked and answered. He considers his own conflicts and intolerances, and he offers an insightful reminder for anyone who has already walked the Camino, and a fascinating perspective for those who have yet to undertake that journey. He tells a story of a walk through life—a life lived, questions asked, and lessons learned.

Peter Campbell has been a traveller all his life, living, working, and visiting many countries across the globe, and undertaking treks on most continents on Earth. His professional background has been in adult education within the corporate environment, with his early writings being of a technical nature. Campbell now lives with his wife, Janet, in a peaceful, rural setting in the southwestern corner of Australia, close to the southern Indian Ocean, in the company of kangaroos and birds.